This week, German President Frank-Walter Steinmeier paid a working visit to Moscow and met with President Putin. Speaking to Sputnik, Horst Teltschik, Chancellor Helmut Khol's former security advisor, outlined the significance of the meeting, and the broader trajectory of German foreign policy as he would like to see it.

Speaking to reporters following his meeting with the Russian leader on Wednesday, Steinmeier said that Russian-German relations were "too important" to remain at their current, strained levels, notwithstanding some "open wounds" including Crimea and the ongoing civil war in Ukraine. Vladimir Putin, in turn, said that relations were moving forward, and that Moscow was ready to work with Berlin.

© Sputnik / Michael Klimentyev
Putin at Presser With Steinmeier: Moscow-Berlin Relations Improving (VIDEO)
Observers took note of the fact that Steinmeier's trip was the first visit to Russia by a German president in over seven years, with Christian Wulff conducting an official state visit in October 2010. Steinmeier's visit this week was a working visit, meaning fewer formalities, no official reception, and no military honors, but given the state of relations between Moscow and Berlin, proved to be no less significant.

The analyst recalled that Steinmeier is familiar with Putin, based on several past meetings, including based on his capacity as German's foreign minister from the start of the Ukraine crisis. Accordingly, Teltschik said, it's possible that the German president may have lobbied the Russian leader during their talks to take some further conciliatory steps to enable Europe to gradually remove anti-Russian sanctions, regardless of what Washington does. One step in this direction has already been made, he said, when Moscow proposed to deploy UN peacekeepers in eastern Ukraine.

Teltschik has no doubt that Steinmeier discussed these issues with Chancellor Merkel before his trip. As for Berlin's tendency to get the cues on its Russia policy from Washington, the observer stressed that in two separate meetings with Chancellor Angela Merkel, President Trump said that the EU should be more self-reliant.

"We must not forget about our own interests, and voice these interests to our American partners, clearly and unambiguously formulate them and try to enforce them," the analyst said. "We should do this, instead of always waiting for the good graces of our American friends," he added. 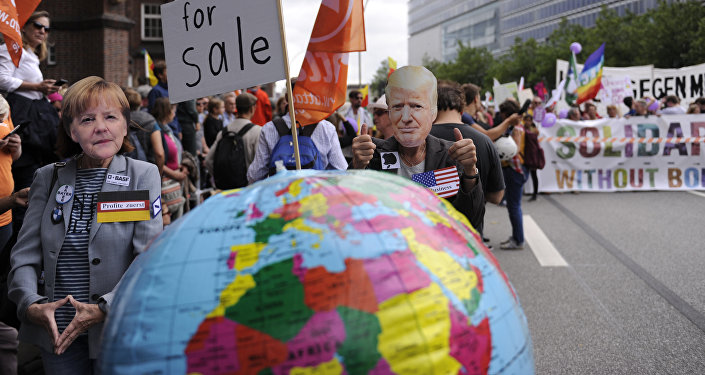 © AFP 2019 / Steffi Loos
German 'Transatlantic Manifesto' Wants to Fix US Relations at Expense of Russia
Additionally, Teltschik hopes that the talks may lead to progress on the issue of military de-escalation. "I think it would be important, given the recent military exercises along Russia's borders, to ask whether there are any points that could help in the resumption of disarmament and arms control talks."

In any case, the analyst stressed that one thing was clear: "President Putin has become a global player. Hey played a key role in the Iran [nuclear] deal, he, to put it bluntly, saved Bashar Assad's life, or at least allowed him to remain in power. He's a key player in the Middle East, and in the crisis over North Korea."

The latter fact, according to the expert, means that Steinmeier had many topics to discuss with the Russian president, and that Putin's position was one worth taking into account.

Teltschik's comments were echoed by Ulla Schmidt, former vice-president of the Bundestag. Speaking to Sputnik Deutschland, she characterized Steinmeier's visit to Moscow with the following statement: "Peace in Europe is possible only with Russia's participation. I agree with Helmut Schmidt [a German chancellor during the Cold War]: It is better to talk a hundred times than to shoot once."