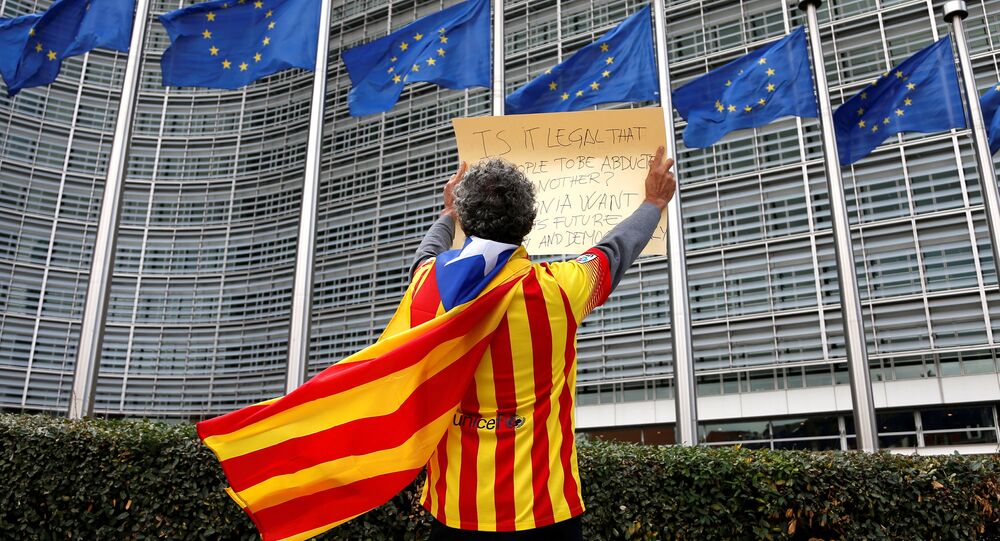 The EU has once again voiced its support to Spain, following Catalonia's official declaration of independence and Madrid's imposition of direct rule on the region. Sputnik has discussed the causes and possible economic ramifications of the ongoing crisis with the Head of the School of Economics at Kingston University London, Steve Keen.

Sputnik: Quite extraordinary scenes this afternoon in Catalonia. Are you surprised it's come to this?

Steve Keen: No, I am not. One thing that we tend to forget is that the last fascist dictator to die in his sleep was the last fascist ruler of Spain. So there's a deep tendency for authoritarian reactions in that country. But in the meantime, the real story I think is the impact of the euro causing effectively depressions through southern Europe. And areas that were rich before the euro came are the ones that are leading revolts against it right now.

Catalonia, of course, is the prime example!

Steve Keen: Absolutely! The EU has completely sided with Spain, the only thing it did was acknowledge that the actual referendum was illegal. It didn't make any mention of the heavy-handed treatment by the Spanish police and of the enforcing of that judgment. They should have been far more sensible simply ignoring it. The EU has aligned itself here with basically suppressing democratic tendencies inside its own member countries.

Sputnik: Do you think that's actually recognized by the European public? Or has it gone unnoticed?

© Sputnik / Javier Luengo
Anticonstitutional, Wrong: World Leaders React to Catalan Independence
Steve Keen: I think it's gone unnoticed because the real reason to form the European Union was to bring about European unity. And that was, of course, a noble aim after the Second World War. But the mistake was the economic system into which it was imposed. And if you're trying to bring about economic democracy of a continental level, when you don't have a treasury at the same time and you don't have a way of equalising the impact of trade imbalances, which is what removing the flexible exchange rates prior to the euro ended up causing, then you have a system which will end up causing crisis after crisis.

Which is, of course, what happened with the global financial crisis leading to great-depression-levels of unemployment in Spain. And they're still at 17% of the population. For everyone who thinks that the European Union is about unifying Europe — this is a great example of it actually causing Europe to fragment.

Sputnik: Of course stock prices in Madrid slid this morning before the Catalonia declaration. It doesn't look good for the Spanish economy, all this uncertainty, does it?

© AP Photo / Manu Fernandez
'Catalonia Could Be Foundation for What Will Happen Across the EU' - Economist
Steve Keen: No, and of course this is another thing: Barcelona, obviously, is a major tourist destination. And obviously, there are going to be people canceling flights etc on that front…. And the impact of the political as well as economic uncertainty is going to damage Spain. And this is, of course, a very heavy-handed reaction: they've turned something that could have been simply ignored into an absolute political and constitutional crisis at the Spanish level and of course now at the European as well.

Sputnik: Do you think that we'll see the backlash from all of this? Those other European countries will either benefit or be affected by these economic issues in Spain?

Steve Keen: Well tourism is obviously going to go to other European places rather than Spain…this is a sort of important but rather minor economic impact. I think the major thing is that for a while this is going to suppress other people thinking about independence votes in the medium term, but in a slightly longer perspective people are going to say: "This is a system we should be leaving rather than staying in!"

So, I think the European Union is just making more problems for itself by not acknowledging the extent to which its policies have caused economic decline and now — political division!