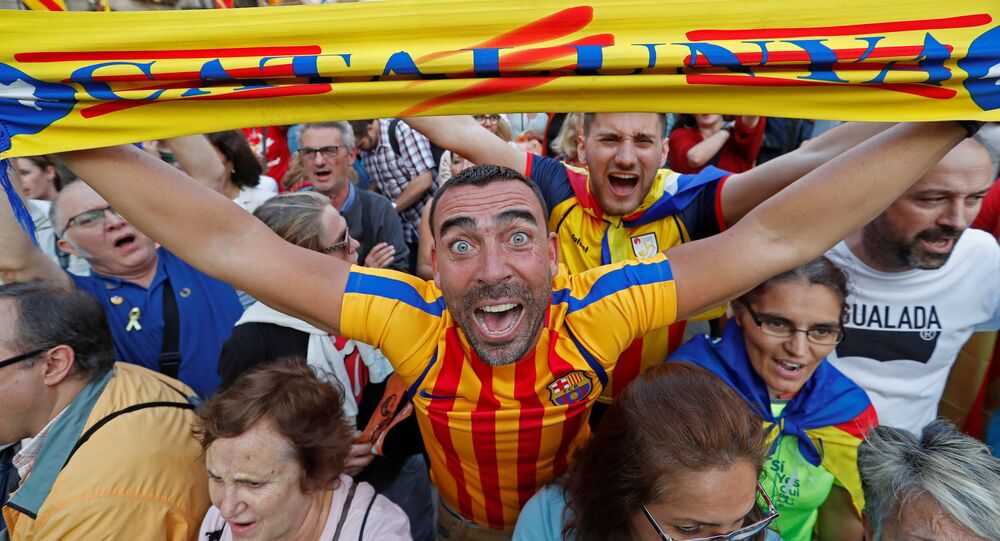 'Rajoy's Intransigence' Pushed Catalans 'Fed Up With Being Treated Like Kids'

After days of uncertainty, the Catalonian parliament has finally declared independence from Spain, a "disappointing, but not surprising" move given the apparent breakdown in negotiations between the two sides, according to Professor Duncan Wheeler of the University of Leeds.

Sputnik: Could the events have been handled better by both sides?

If you look at it purely in terms of [Mariano] Rajoy's own personal political career, he has done it quite ruthlessly, but quite effectively, because I think he knows, he's not interested in appealing to voters in the Catalan pro-independence movements who are never going to vote for him.

He is really appealing to his loyal contingents, and I think one thing that hasn't unnecessarily come across in the news much over her is how much Spain really supports Rajoy taking such a hard line.

Sputnik: What about the United Nations decision to come out in support of Catalonia while the European Union has not shown any backing at all?

Professor Duncan Wheeler: The response from the EU has been disappointing. To a certain extent one of its prime functions is to protect citizens of Europe against certain kinds of structural and physical violence.

It sounds awful to say, but I think Catalonia's best chance is international organizations, if the aggression from the central state becomes more aggravated, the best chance is outside intervention. This appears to be much likely to be forthcoming from the United Nations than the EU.

Sputnik: The Spanish police violence had encouraged more people to vote for independence during the referendum. Do you think people will be pushed further in contrast to Rajoy's actions?

Professor Duncan Wheeler: I am not entirely convinced. I think there has been a build-up to Rajoy's intransigence and this goes back many years, not just the violence that was witnessed. It has pushed people who were fed up with being treated like kids, and this played into the hands of the independent movements.

© REUTERS / Yves Herman
People celebrate after the Catalan regional parliament passes the vote of independence from Spain in Barcelona, Spain

I think it is very difficult to know from that referendum, there has been talk. I have no idea how accurate it is if people are voting two or three times. You can't take too many conclusions from that, but what we can say is that the attitude of Rajoy is making people polarized.

A polarized political scene, in a sense, has played into the hands of separatists in Catalonia itself.

At the Brink: Showdown Looms Between Spain and Catalonia