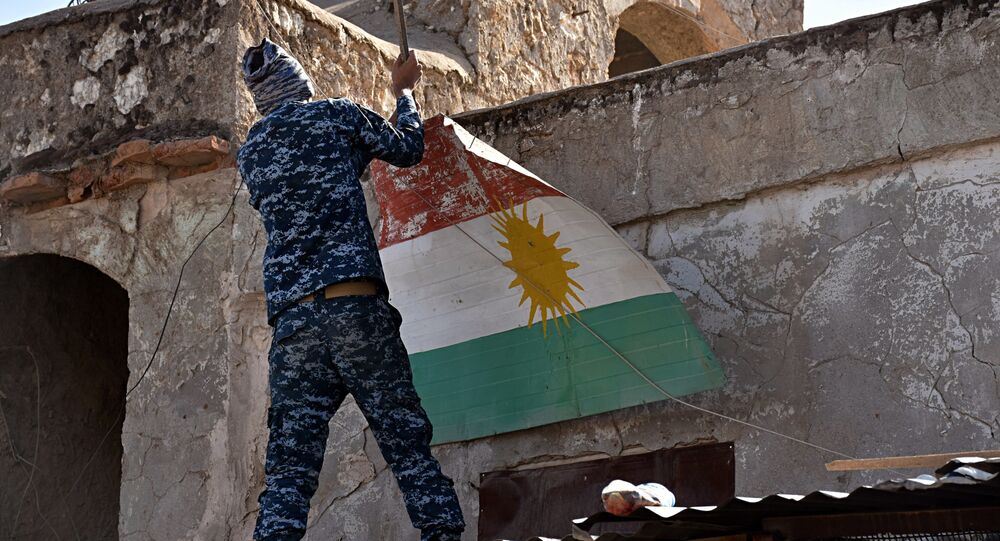 'There Is a War Already': Official Warns of Likely 'Death' of Iraqi Kurdistan

A representative of Kurdistan in Russia and the Commonwealth of Independent States (CIS), Khoshavi Babakr, has expressed his views on the future of Kurdish autonomy in Iraq in light of the recent offensive launched by Iraqi forces to seize control of the disputed territories.

MOSCOW (Sputnik) – Baghdad is seeking to take control of Iraqi Kurdistan's border with Syria, something which, if achieved, will result in the isolation and imminent "death" of the autonomous region, Khoshavi Babakr told Sputnik.

In Syria, the majority of Kurds live in Rojava which is a de facto autonomous region. The autonomous status was proclaimed by the Kurds in 2016 amid the country's ongoing civil war despite opposition from the central government. The region neighbors with Iraqi Kurdistan and Turkish areas inhabited by Kurdish minorities. Together these three regions form so-called Greater Kurdistan.

© REUTERS / Stringer
Iraqi Troops Shell Kurdish Positions Despite Proposed Ceasefire
Tensions between Baghdad and Erbil escalated after September 25, when Iraqi Kurdistan held an independence referendum alongside several other areas controlled by the Kurds. After that, Iraqi forces, supported by the militia, started an offensive aimed at recapturing the disputed areas, including border crossings in the north that served as an economic lifeline for Iraqi Kurdistan.

According to Babakr, Iraqi Kurdistan has lost about one-third of the territory previously controlled by Kurdish militia as a result of the fighting. He went on to state that the clashes between the Kurds and Baghdad's forces were ongoing along the whole front line.

"There is a war already," Babakr said, adding that strong opposition from the global community was needed to make Iraq stop its offensive in the disputed areas, since “Baghdad recognizes only strength”.

It has destabilized some of the country’s safest areas, displaced over 150,000 individuals and created dangerous security vacuums.

In a statement on Wednesday, the Kurdish authorities called on the Iraqi government to take responsible actions in order to prevent further violence and escalation of tensions, expressing their readiness to "freeze" the results of the referendum. On Thursday, Iraqi Prime Minister Haider Abadi rejected the Kurdish initiative and demanded that Erbil annul the results of the vote.

Baghdad should withdraw all forces from nearby areas and accept KRG's offer for unconditional talks to settle political differences.

© Sputnik / Evgeny Biyatov
Moscow's Stance on Kurdistan Referendum 'Very Friendly' to Baghdad - Iraq FM
Amid the escalated conflict with Baghdad, there was speculation that Iraqi Kurdistan's President Masoud Barzani was ready to resign. However, he has remained in office under US pressure, a representative of Kurdistan in Russia claims.

Babakr suggested that Barzani’s resignation would plunge the region into chaos, because "in the East, a charismatic leader plays a big, important role."