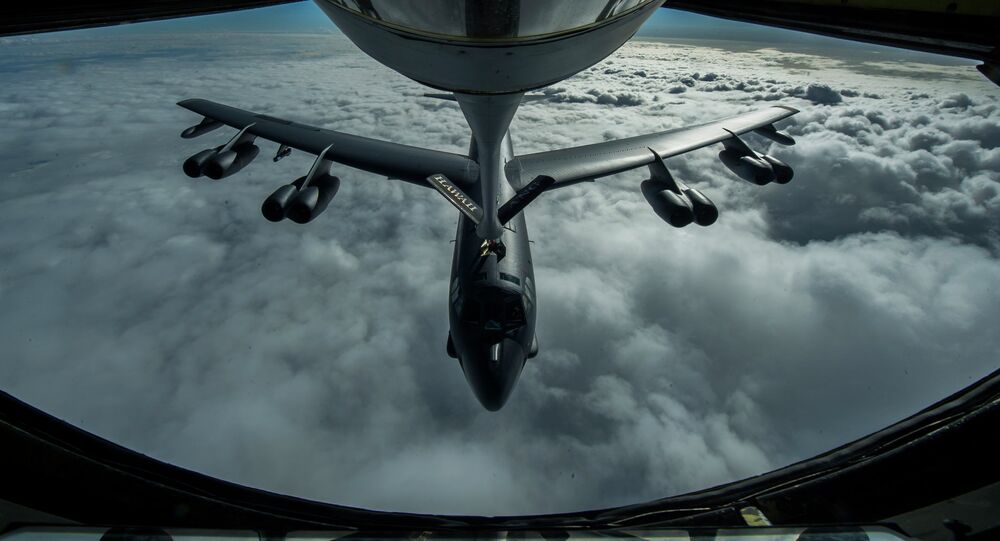 The recent report that the US is preparing their B-52 nuclear-capable bombers for 24-hour readiness, although denied by the Pentagon, nevertheless highlights the urgent need for de-escalation measures. Radio Sputnik spoke with Dr. Howard Stoffer, associate professor with the National Security Program at the University of New Haven, about ways out.

Sputnik: So far we've only seen Pyongyang responding to threats by making further threats. What's the US endgame here?

Howard Stoffer: It's hard to say. I think it's what it has been for the last 25 years — that is, denuclearize the Korean Peninsula and to convince North Korea that their security would be better off without having a nuclear capability. But right now Kim Jong-un has continuously said publicly that he wants nuclear weapons, because that's the only way he can be sure that the US would not depose him, decapitate his regime, as he has seen with Saddam Hussein and Muammar Gaddafi, who allegedly had nuclear weapons and once they gave them up, were removed.  I'm a little concerned however, that President Trump's decision to decertify the Iran deal sends a very negative signal, because it basically says the US will not allow Iran to stay non-nuclear because they think it's a bad deal, and that sends a negative incentive to the North to want to sign a similar agreement. I guess the endgame is to get the North to stand down, to get the North less threatening to the South and to focus on its own development. That would be the best outcome.

Sputnik: Russia and China have repeatedly called for a stop to the dangerous muscle flexing and a return to diplomacy. Would Washington take heed of such calls?

Stoffer: That's hard to say but I'm hoping they will. Diplomacy is always a better alternative to using military force. We have to regard the use of military force as the last possible step. Unless, of course, the North does something absolutely threatening, like, for example, landing the missiles in Guam, or landing the missiles — whether they be armed or not having any warheads — on the West Coast of the United States or possibly even detonating a nuclear weapon over the Pacific in an atmospheric test. But surely they are extreme steps. There's a lot of room for diplomacy, there's a lot of room for regional actors — Russia, China, Japan, South Korea, the United States — to sit down with the North and try to figure out a way to give them the kind of guarantees they're looking for, [so] that they would be willing to stop their program and eventually denuclearize their program. Because every country that has acquired nuclear weapons has had less security — most particularly looking at India and Pakistan — than those that never went to nuclear level.

Sputnik: We've heard some analysts from around the world saying that the rhetoric coming from Washington and Pyongyang is virtually the same. Shouldn't President Trump be rising above this petty rhetoric?

Stoffer: Well, everybody has been saying that. For years, [US] presidents just ignored what Kim Jong-il was saying — he was the father of Kim Jong-un — and even what Kim il-Sung was saying; in the North they always came out with a lot of harsh, intense and very unrealistic rhetoric, but presidents haven't engaged in that. I think that Trump is a different kind of personality and as a result, we have this exchange of very threatening statements to each other. The real danger of that is that it can lead to a miscalculation. A lot of wars have started, and, most interestingly, World War I — the ‘Guns of August' by Barbara Tuchman tells us — that wars start sometimes because both parties are on a hair-trigger, and something happens and it just initiates the war. That could very well be the case with North Korea and the United States. And it would be terrible, because on the first day we are talking about hundreds and thousands of casualties. We should do everything we can to lower the temperature, lower the rhetoric. And [it is] certainly on our side to do that and to hope that the other side will respond with lower rhetoric and more willingness to sit down, either at the UN or in the region or some other arrangement — maybe in Beijing or Moscow — where talks could take place and the North could be engaged in a diplomatic effort to deal with its nuclear program.

Sputnik: Is there hope to returning to proper crisis management mechanisms such as the UN Security Council and the European Union?

Stoffer: I think it should, yes I do. And I think that the five permanent members have to work in unison and push very hard on insisting that existing treaties, like the nonproliferation treaty of 1968 — which the North left in 2002 (and abrogated its ratification) — and other ways that the Security Council can operate as it has in so many other regions of the world to bring about, you know, stability — if not peace, at least, stability. And certainly the secretary general, if there is encouragement from the North, could nominate a special envoy that could go to the North, go to Pyongyang, and sit down as a neutral party and say "okay, what will it take to get some kind of dialogue going?" And I think that's the step that still needs to be taken — among many. There are many other diplomatic initiatives that could be taken.