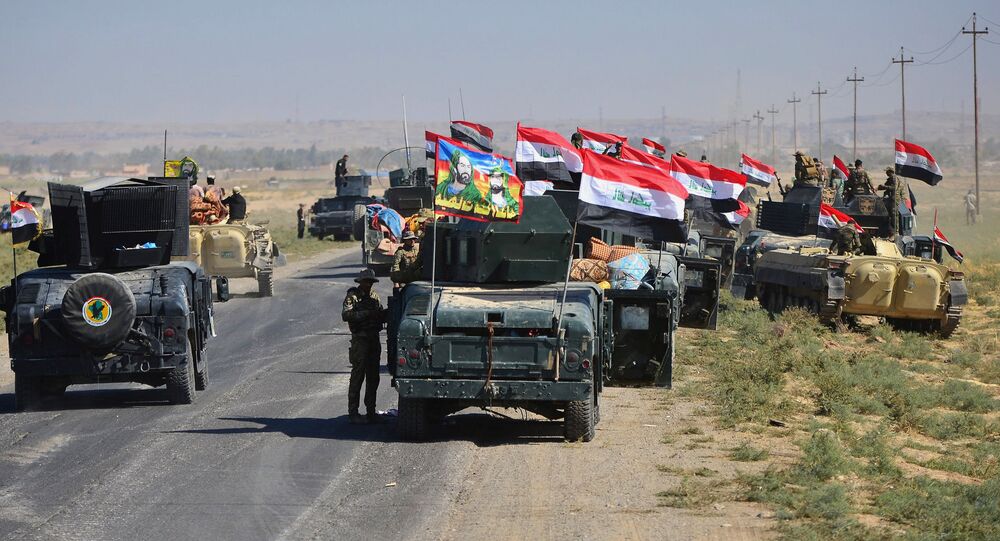 The US has suffered a defeat from Tehran in Iraqi Kurdistan, RIA Novosti contributor Gevorg Mirzayan writes, adding that Iran managed to outmaneuver the US and help Baghdad regain control over the oil-rich province of Kirkuk. According to the academic, the Iraqi operation may also affect the US-backed Kurds' independence plans in Syria.

While threatening Tehran to annul the Iran nuclear deal, Washington has lost to the Islamic Republic in the Middle East, Gevorg Mirzayan, an associate professor at the department of political science at the Finance University of the Russian Government, wrote for RIA Novosti.

"Washington actually gave its Kurdish allies up to Baghdad" after it had not prevented the Iraqi Armed forces from retaking Kirkuk from Peshmerga, he noted, adding that "the defeat of the United States turned into Tehran's victory: the Iranians emerged as one of the main beneficiaries of this crisis."

The independence referendum that took place on September 25 had become the trigger point for the crisis. More than 90 percent of the voters taking part in the referendum in Iraqi Kurdistan backed the region's independence from Baghdad. Iraqi authorities declared the referendum illegal, while Turkey and Iran criticized the vote.

© REUTERS / Stringer
Baghdad's Advance on Kirkuk Has 'Broken the Kurds' Back'
On October 15, Iraqi Prime Minister Haider Abadi ordered the country's army and police to secure bases and federal installations in the oil-rich province of Kirkuk.

In two days Iraqi troops and Shiite militias regained control over a number of military and transport facilities in the province, including the airport, military base, oil fields and the city of Kirkuk, as well as the town of Sinjar and the dam near the city of Mosul.

In less than a week Iraqi military forces regained control over the Iraqi territories, which the Kurds had seized in 2014 during the war against Daesh (ISIS/ISIL).

"Iraqi Kurdistan has not only failed to [gain independence], but has suffered serious losses," Mirzayan underscored. "The September referendum was supposed to legalize the Kurdish territorial acquisitions in Iraq, but instead the Kurds lost control over them. The referendum also drove a wedge between the Kurds and their most important foreign policy partner — Turkey."

The academic recalled that previously the Kurdish oil industry didn't depend on Iraqi logistics and trade due to Erbil-Ankara cooperation. However, Turkish President Recep Tayyip Erdogan regarded the independence vote as a stab in the back and threatened the Kurdistan Regional Government (KRG) with sanctions.

The KRG's head, Masoud Barzani, has ended up worse off, according to Mirzayan: The Kurdish defeat has not only dealt a blow to his ratings, but has resulted in the emergence of his rival — the Talabani clan and the Patriotic Union of Kurdistan (PUK) party.

According to Mirzayan, the credit for the Iraqi troops' success actually goes to Soleimani who managed to convince the Talabani clan to cooperate with Baghdad.

The academic wrote that as a result of the conspiracy the PUK-aligned Peshmerga left their positions near Kirkuk on the eve of the Iraqi forces' advance thus paving the way for their win.

For its part, Washington has lost face, as well as a convenient foothold in Iraqi Kurdistan, which could have been used to trigger unrest among Iranian Kurds, he noted.

"The situation in Kurdistan was a classic version of the US-Iranian proxy war," Mirzayan wrote. "The Iranians were behind the Iraqi armed forces' actions, planning to solve the Kurdish [separatism] problem and prevent the transformation of independent Iraqi Kurdistan into an American springboard."

According to Mirzayan, the US demonstrated an inability to pursue its own strategy: US President Trump has repeatedly claimed that he sought to contain Iran and went even so far as to decertify the Joint Comprehensive Plan of Action (JCPOA).

"The Americans have not just lost this war, but they appear to surrender to Iran at its very beginning," the scholar noted, adding that US companies, most notably US oil giant Chevron, have suspended their work in Iraqi Kurdistan.

Furthermore, the successful operation carried out by Baghdad and Tehran in Iraqi Kurdistan may influence the independence aspirations of Syrian Kurds, the academic surmised: It appears that they would think twice before acting against the alliance of Russia, Syria, Turkey and Iran in Deir ez-Zor. It is highly doubtful that Washington would come to the Kurds' rescue in that case, he concluded.