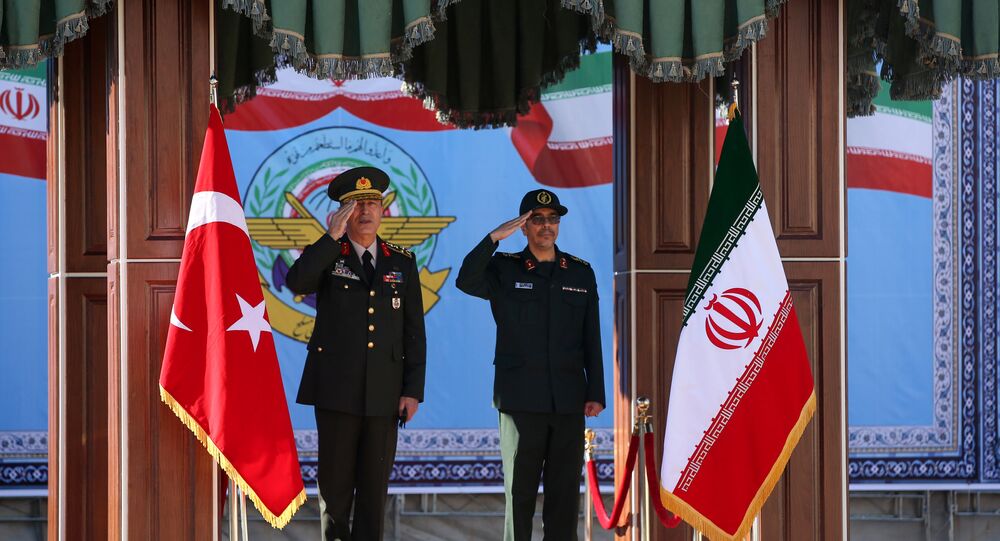 The main reason for the crisis in Turkish-US relations is Turkey’s turn to Eurasia, Turkish commentators have told Sputnik, explaining that Turkey now believes that by siding with Russia, Iran, Iraq and Syria it can better protect its national interests. While Ankara is not going to cut off its ties with the West, their mutual distrust is growing.

Over the last few months Turkey has not been able to come to a consensus with the US on virtually any of the controversial issues, such as the support that the US provides to Syrian Kurdish self-defense units, the extradition of Fethullah Gülen and the visa crisis that erupted between the two countries last week.

“Turkey has come to a conclusion that even if it fails to reach an agreement with Russia, Iran, Iraq and Syria on all of the issues, they will still come to a common solution in the process of collaboration, and will be able to protect their national interests,” Soner Polat, political analyst and deputy chairman of the Turkish left party Vatan, told Sputnik Turkey.

He added that the Euphrates Shield military operation was a clear demonstration of such mutual collaboration.

© AP Photo / Evan Vucci
Unresolvable Contradictions: How the US and Turkey Parted Ways
“Although it was not obvious that Russia and Iran were actively supporting the Euphrates Shield operation, the events show that there was an agreement between the parties. In relation to Aleppo, Turkey supported Russia, perhaps, Russia also supported Turkey during the Euphrates Shield operation,” the political analyst said.

So it is safe to say that through numerous agreements and various concessions a solution was found; however, for Turkey to achieve the same with the West is becoming almost impossible.

“The visa issue was just a pretext, and the real reason for what happened, is that Turkey has turned in the direction of Eurasia and is no longer considering the West as an arbitrator in resolving regional issues,” Polat said.

According to a recent poll, Turkey ranked first among countries with a predominance of anti-American sentiment, as evidenced by the response of 72 percent of the respondents.

© Sputnik / Iliya Pitalev
'Untangling the Syrian Knot': Why Russia-Turkey Coordination in Idlib Pivotal
Similarly, according to the analyst, “73 percent of the voters in the Justice and Development Party (AKP) stand for building good relations with Syria. Consequently, society wants the same. Of course, the West sees this very well and conducts a geopolitical war in this direction; visas and everything else were just an excuse. If Turkey did not stand on the way to Eurasia, none of these issues would grow into such a serious crisis.”

“It is clear that such a course of events creates a serious danger for the national security of Turkey and its integrity. Consequently, Turkey’s reaction is natural. Turkey stated that it would not allow the creation of the Kurdish corridor back in 2015, but the US did not attach any importance to that,” Unal said, adding that the US persistently carried out the transfer of members of the Party of the Democratic Union to the western part of the Euphrates, which later, after an attempted military coup in Turkey in 2016, led to operation Euphrates Shield.

He also said that if the US does not abandon the implementation of the "Greater Kurdistan" project, relations between Turkey and the US would further deteriorate.

Future of the current crisis

Turkey's relations with the United States and the West in the last 20 years have been acquiring a new format. In any of the important issues that make up Turkey's foreign policy, for example, the Cyprus, Aegean and the Armenian issues, the US and the West oppose Turkey.

© REUTERS / Kevin Lamarque
Erdogan Blames Washington for US-Turkey Visa Dispute, Hints at FETO Trace
Unal believes, "Turkey can make an attempt to close the military base in Incirlik, and it will be absolutely right. Americans can stop the exchange of data and intelligence and can stop selling arms to Turkey, but again, what is the scale of arms trade right now is still worth asking.”

The analyst also said that on the other hand, Turkey is taking serious steps to create its own defense industry. All of that is taking place at the same time, so that both Turkey and the US have a number of countermeasures in reserve.

“In this regard, I predict a further aggravation of the crisis in Turkish-American relations,” Unal said.

Recently, Ankara and Washington have found themselves amid a diplomatic crisis, which has been gradually evolving since the attempted July 2016 coup in Turkey. As political analyst and RIA Novosti contributor Gevorg Mirzayan noted, the Turkish leadership still has suspicions that the US could have had a hand in the July uprising.

Furthermore, Washington is still refusing to extradite Fethullah Gulen, the founder of the Gulen movement (FETO) and the alleged mastermind behind the coup attempt in 2016.

Meanwhile, the Russian-Turkish-Iranian Astana format has proven highly efficient. A series of negotiations on the Syrian crisis, which were kicked off in December 2016 in Kazakhstan's capital, have resulted in the implementation of a prolonged truce in Syria and creation of four de-escalation zones in the country.

The Astana talks, along with Geneva, have become one of the major global platforms for negotiations on the settlement of the conflict.