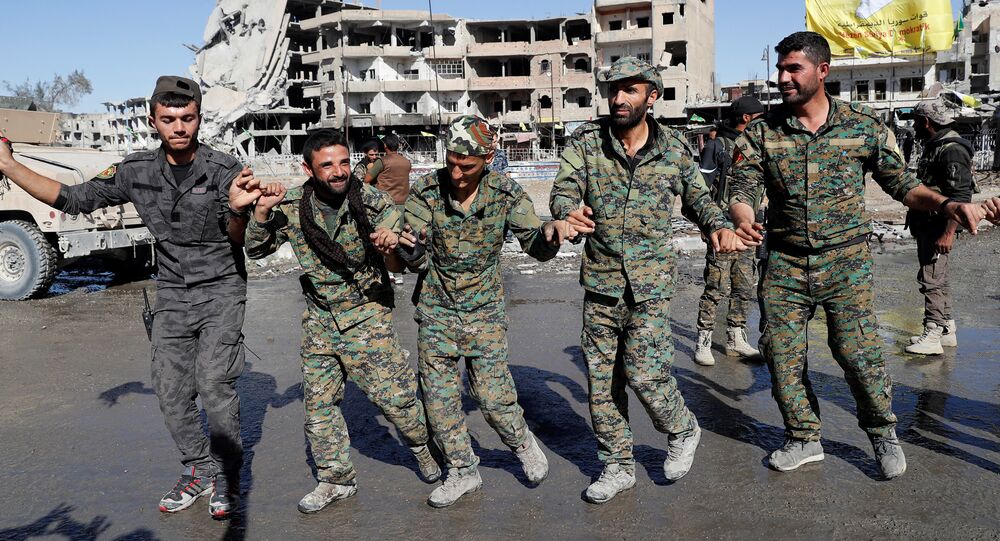 With the Kurdish-led Syrian Democratic Forces (SDF) ousting Daesh terrorists from Raqqa, their de facto capital, some pundits and commentators are calling on US President Donald Trump to instruct proxy militias to launch a wider campaign against the Syrian Army - and other pro-government forces - to remove President Bashar al-Assad from office.

The Kurds have largely capitalized on the unrest, which has plagued Syria since 2011, to gain control of large swathes of territory near the Turkey-Syria border, while also establishing an increasingly large presence in the eastern oil-rich province of Deir ez-Zor.

As the SDF gained territory outside of predominantly Kurdish areas, it recruited Arab militants to make its growing presence in such areas more palatable. However, the SDF is still viewed as a fundamentally Kurdish group, as the bulk of its fighters and members are Kurdish.

The group, which was known as the YPG prior to the incorporation of Arab units within its ranks, was accused of burning Arab villages in 2015, driving over 10,000 civilians from their homes, in what was described as "a campaign of ethnic cleansing against Sunni Arabs."

Seemingly, due to US pressure, the group has reigned-in its anti-Arab stance, though tensions have persisted, with teachers staging a protest earlier this year, voicing their opposition to the decision to impose a Kurdish curriculum on schools in Al-Hasakah city, which would force all students to learn the Kurdish language.

Areas under the control of the SDF are governed by the left-wing Democratic Union Party (PYD), which Turkey views as an affiliate of the Kurdistan Workers' Party (PKK.) The PKK has fought a bitter insurgency against Turkey since the 1970s, and has been designated a terrorist organization by a range of states and agencies, including the US State Department.

The connection between the PYD and PKK was highlighted when the SDF raised a large portrait of Abdullah Ocalan, leader and a founding member of the PKK, in Raqqa, triggering a wave of outrage. He was arrested in Kenya by the Turkish National Intelligence Agency, supported by the CIA, in 1999.

© AFP 2021 / Boris Roessler / dpa
Kurdish protesters demonstrate on their way to the Kurdish spring festival Newroz with placards reading "No to dictatorship" and the portrait of the leader of the Kurdistan PKK Workers' Party, Abdullah Ocalan in the city center of Frankfurt am Main, western Germany, on March 18, 2017

Shortly after pushing Daesh out of Raqqa, the SDF announced that the city and wider province would be part of their federal system. The decision not to hand over Raqqa to the Syrian government, a city which had a pre-war majority Arab population, has reignited the controversy surrounding the SDF's control of non-Kurdish areas.

Given the SDF's affiliation to the PKK, and its Kurdish ideological foundation, it's unsurprising that its ability to govern non-Kurdish areas is being questioned, as there is an inherent conflict of interest.

The Syrian government has maintained a level of cooperation with Kurdish forces throughout the conflict, and it recently announced its willingness to discuss Kurdish autonomy in a post-war context.

"This topic [granting the Kurds more autonomy] is open to negotiation and discussion and when we are done eliminating Daesh, we can sit with our Kurdish counterparts and reach an understanding on a formula for the future," Syrian Foreign Minister Walid al-Moualem said in September.

Although President Bashar al-Assad's government have displayed a degree of pragmatism, they are unlikely to accept the inclusion of predominantly Arab towns and cities in negotiations for Kurdish autonomy.

A deal granting limited autonomy to Kurdish areas is highly feasible, provided the SDF hands over control of resources, such as oil fields, to the Syrian government, or at least agrees generous revenue-sharing deals with Damascus. With the SDF's recent capture of the Al-Omar oil fields in eastern Syria, Kurdish forces effectively control around 80% of Syria's oil reserves.

Meanwhile, some commentators are calling for a wider military campaign against pro-government forces across Syria, employing the SDF to remove President Assad from office.

"Early priorities of a new US policy toward Syria should be: trying Assad for war crimes; deterring Russia and Iran; paying more attention to civilian suffering and casualties; forming safe zones; and pressing wealthy Gulf States to help refugees. It is far past time to consider the big picture and the long game," a Fox News opinion piece reads, outlining the goals of a renewed hypothetical campaign to facilitate regime-change in Syria.

Overthrowing President Assad directly contradicts with the objective of reducing civilian casualties, and controlling the refugee crisis, as much of Syria's remaining population and infrastructure lies in areas under the sanctuary of the Syrian government.

A wide-scale military push to assist opposition militants seize control of government-held territory, which includes several densely-populated cities, such as Damascus, would inevitably result in an unprecedented number of civilian casualties, while also exacerbating the refugee crisis, and unnecessarily risking direct confrontation with Russia.

In any case, this is all wishful thinking, as the Trump administration and other world powers are coming to accept Bashar al-Assad's continuation as president — at least for the remainder of his elected term.

Would Kurdish Independence From Iraq Cause More Regional Instability?