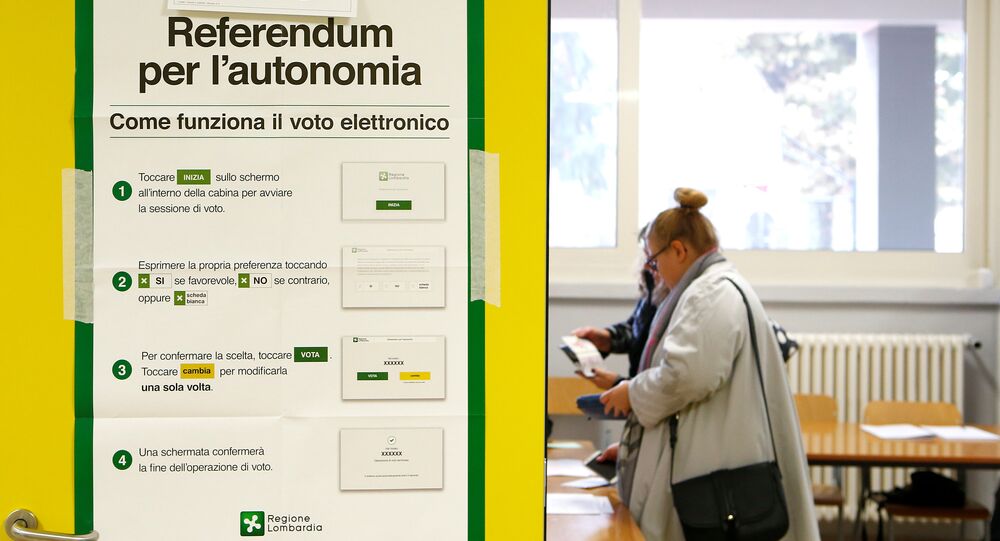 Italy's Veneto, Lombardy to Seek Autonomy, Not Independence Like Catalonia

The residents of Veneto and Lombardy are holding referendums on gaining more autonomy from Rome. Sputnik has spoken with Gianluca Savoini, an adviser on international politics to Lega Nord party leader, and Simona Bordonali, head of security, civil protection and immigration of the Lombardy Region, about the vote in the two Italian regions.

MOSCOW (Sputnik) — Italy's richest regions, Lombardy and Veneto, are holding non-binding referendums on autonomy on October 22, but they are only seeking more devolved powers, rather than independence like Spain's autonomous region of Catalonia.

The movement in favor of autonomy is not a recent development in northern Italy. Lega Nord party, prominent in the regional parliaments of both Veneto and Lombardy, has long backed independence or more autonomy for the north. In 1996, the party suggested that northern Italy should become a separate state of Padania and even set up a parliament for the new entity and organized a referendum. However, Padania has never been recognized by the central authorities or other states.

© AP Photo / Luca Bruno
Domino Effect? Italy's Veneto, Lombardy Seek Autonomy After Catalan Referendum
Veneto had an unofficial online survey on independence in 2014. Slightly more than 60 percent of the eligible voters answered the question about the region's independence, with 89.1 percent of them speaking in favor of sovereignty. The poll included several other questions on whether independent Veneto should use the euro as its currency and join the European Union and NATO. They were also answered positively, but by a slimmer margin and by fewer voters.

Venetian regional parliament then discussed and passed a bill first on the autonomy referendum, then on an independence vote. The Constitutional Court rejected the latter, but approved the referendum on larger powers for the region. The court also ruled negatively on a potential Venetian referendum, where the residents would be asked if they would like to keep 80 percent of taxes in the region.

The two upcoming polls will take place a little less than a month after the independence referendum in Catalonia, held on October 1. More than 90 percent of about 2.2 million of the Catalan voters backed independence, but Madrid does not recognize the results of the vote and the central government is about to discuss the imposition of direct rule in the autonomous region.

Gianluca Savoini, an adviser on international politics to Lega Nord party Federal Secretary Matteo Salvini, has stressed that the situation in Italy is different from the one in Spain and Lombardy and Veneto are acting within the constitutional framework.

"I don't think that situation in Catalonia will influence our vote because the situations are very different. Barcelona is asking for a formation of a new state independent from Spain. Lombardy and Veneto instead respect the laws of the Italian state which allow regions to gain more autonomy," Savoini said.

The Italian Constitution allows regions to hold negotiations on devolved power with Rome without a referendum, but a vote may give Lombardy an advantage in the talks with the central government, especially if the majority backs autonomy.

The regional authorities of Italy's Lombardy plan to launch autonomy negotiations with Rome immediately after the referendum, Simona Bordonali, head of security, civil protection and immigration of the Lombardy Region, told Sputnik.

"After the vote, we will immediately start the process to obtain more independence… It [the referendum] will give us democratic legitimacy and full mandate for [President of Lombardy] Roberto Maroni to hold the negations [with Rome] from the position of force," Bordonali said.

© Sputnik / Mihail Mokrushin
Autonomy Versus Independence: Real Goal of Lombardy, Veneto Referendums
According to Paolo Grimoldi, a regional secretary of the Lega Nord party for Lombardy, the referendum should deliver not only a positive answer to the question on autonomy, but a high turnout as well, to ensure an advantageous position for devolution talks with Rome.

"The real problem is not delivering a YES result. It is how the people will say YES. If millions of Lombardy citizens will vote, it’s obvious that we will have more of leverage in talks with Rome. If few people will vote, we will have a weak position in the future talks," Grimoldi said.

Potential financial rewards, in particular the ability to retain more of the local taxes, play an important role in the two regions' drive for autonomy.

Bordonali, who is also a member of Federal Council of the Lega Nord party, said that the region was sending 54 billion euros (roughly $63.7 million) annually to the federal budget, but not receiving enough in return in terms of investments and services.

"This situation is no longer tolerable," Bordonali said.

Lombardy president Roberto Maroni said in September that he would like to keep half of this sum in the region.

The adviser to federal secretary of Lega Nord suggested that other Italian regions might also ask for more autonomy, inspired by the example of Lombardy and Veneto.

"I know that Liguria will do. So I don't exclude the positive 'domino effect'," Savoini said.

© REUTERS / Ivan Alvarado
Invoking Article 155 Is 'Worst Attack' on Catalonia in Centuries
Bordonali also expressed hope that other Italian regions would ask for more independence from the central government.

The Italian government said Wednesday in a statement that it supported the regions' quest for more autonomy as long as all limits set by the constitution were taken into account.