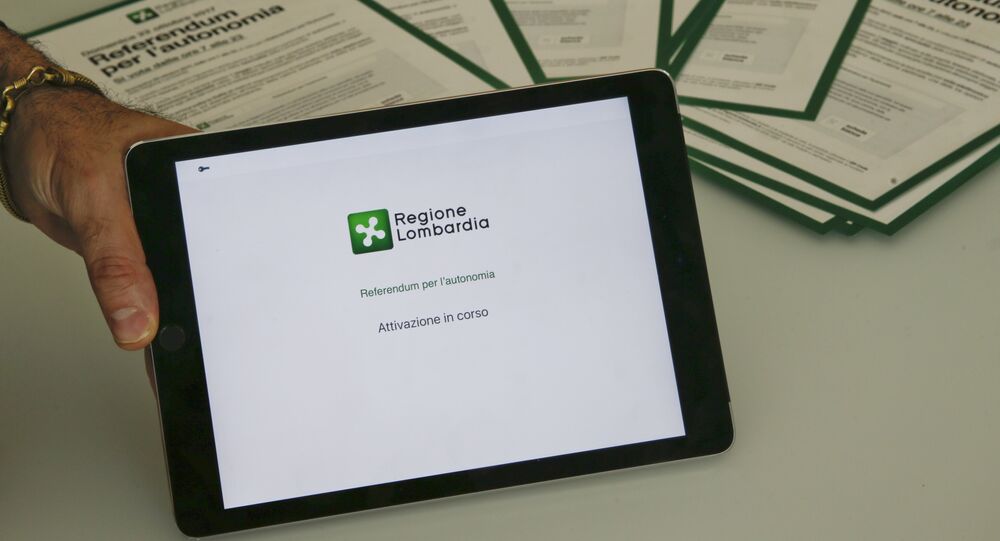 The Catalan referendum has caused fears over growing separatist sentiments across Europe, however, according to an Italian politician, the two Italian regions are not seeking independence despite discontent with the central government's economic policies.

MOSCOW (Sputnik) — Italy's regions of Lombardy and Veneto are going to hold non-binding referendums on autonomy this Sunday over persistent economic discrimination by Rome and seeking larger powers and ability to retain more of the local taxes, Stefan Valdegamberi, a member of the Regional Council of Veneto in Italy, told Sputnik.

Veneto and Lombardy "pay more than the rest of Italy and receive less from the state," the politician said, stressing they tend to be more efficient in terms of the economic management and "can administrate much better than the Italian State."

The regional lawmaker said he does not think that the example of Lombardy and Veneto would necessary produce a "domino effect" and inspire other Italian regions to ask for more autonomy as their financial situation is different and their regional economies are more dependent on the central state.

© AFP 2021 / OLIVIER MORIN
Catalonia's Shadow: Why Two Italian Regions Seek Autonomy Referendums
The Italian government stated that it supported the regions' quest for more autonomy as long as all limits set by the constitution were taken into account. The Italian Constitution allows the country's regions to have a different status after the consent of the government is achieved. From the procedural point of view it is not legally binding to conduct a referendum on the issue, however, local authorities decided to secure popular support first.

This comes as the Spanish region of Catalonia, one of the most productive and richest, conducted a controversial independence referendum. Over 90 percent of the 43 percent of Catalans who participated in the vote cast their ballots in favor of secession. The vote was condemned as illegal since it was in breach of the Constitution in which territorial integrity of the country is enshrined.

Almost three weeks after the referendum, Puigdemont still can’t clarify the status of the region and ignores the demands of the government to withdraw Catalan's independence bid. On Saturday, Spanish Prime Minister Mariano Rajoy claimed he had no choice other than to trigger the article 155 of the Constitution and remove Catalonia’s leaders. The Article allows the government to impose its rule in any of the country’s regions and strip it of the autonomous status.

Russian-Italian Economic Council to Convene in Moscow in November - Embassy