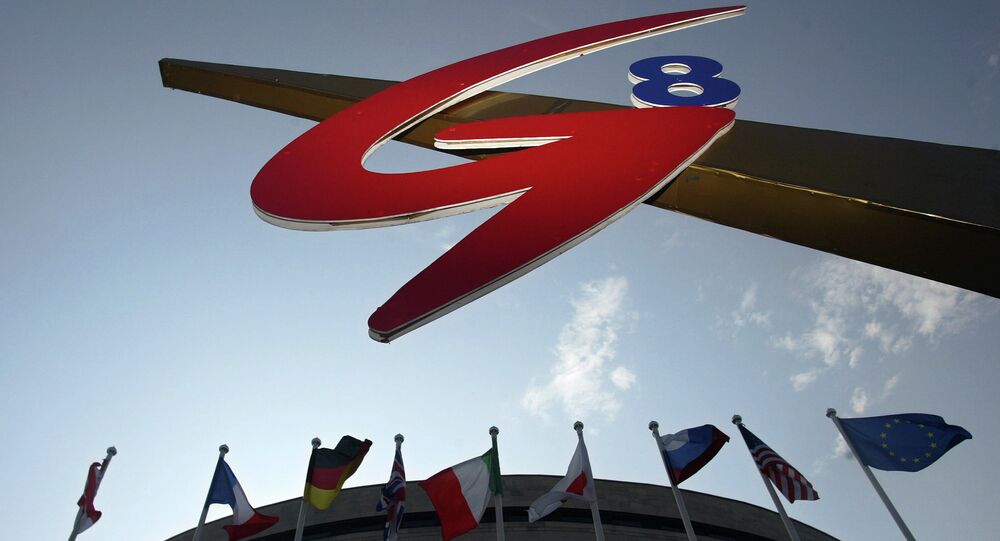 The Group of 8 (G8), an international club which brings together heads of the economically strongest nations, became the G7 in 2014, as seven leaders of the member-states refused to take part in the annual summit of a group in Russia's Sochi over the Ukrainian crisis.

MOSCOW (Sputnik) — Two members of the Alternative for Germany (AfD) party believe that Russia "should return directly to G8," without any kind of interim arrangement like the one proposed by Germany's Free Democrats (FDP).

FDP leader Christian Lindner has suggested that Russia could return to the G8 with the help of an interim "7+1" format.

Dr. Anton Friesen, a special representative of the Russian Germans’ working group in Bundestag from AfD, has also expressed support for Russia's direct return noting that "dialogue is better than confrontation."

The G8 is rather an informal group comprising the leaders of the eight highly industrialized nations, who meet every year in the form of summits. It was created in the 1970s to tackle global problems through dialogue and cooperation. As of early 2014, the club included Canada, France, Germany, Italy, Japan, the United Kingdom, the United States and Russia.

In 2014, seven of the states boycotted the summit in Russia's Sochi, citing disagreements over the Ukrainian crisis and reformatted the G8 into the G7 again.

© Sputnik / Grigori Sisoyev
'Cheap Speculations': Moscow Comments on Rumors About Russia's Likely Return to G8
Since then European high-ranking officials have repeatedly expressed willingness to welcome Russia back to the group. In 2016 the then Germany's Foreign Minister Frank Walter Steinmeier claimed that G7 participants were ready to discuss the return of Russia to the group since "none of the major international conflicts can be solved without Russia" though provided that considerable progress would be achieved in the Syrian peace settlement and in the resolution of the crisis in eastern Ukraine. Italian Foreign Minister Angelino Alfano also supported the idea that Russia could rejoin the powerful bloc but linked it to the implementation of the Minsk accords.

In 2016 Russian Foreign Minister Sergei Lavrov stressed that Moscow did not intend to take any steps to get back to the G8 group. In January 2017, Moscow decided to leave the bloc permanently. Peskov said that the issue of the restoration of the G8 format with Russia’s participation was not under discussion in Moscow as Russia prioritized work in the G20 format which embraces a wider range of participants including 20 world emerging economies.

Russia Must be Returned to G8 Summit - Former Japanese PM

West Will Definitely Find the Way to Return Russia to G8

World Powers to Consider Russia’s Return to G8 Next Year