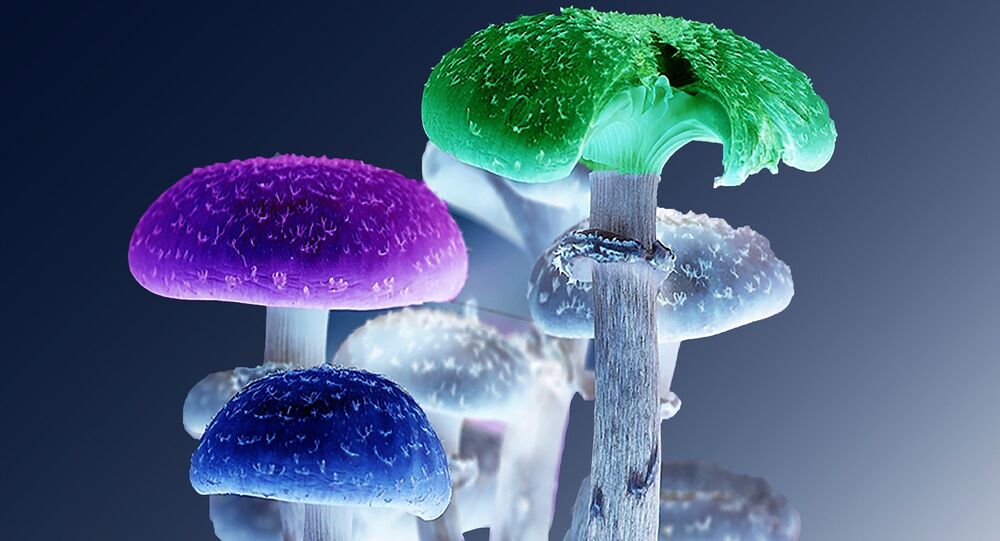 Hallucinogenic mushrooms have been found to help alleviate depression, even in severe cases where other kinds of treatment fail to do the job. Sputnik discussed this finding with Professor Mitul Mehta, from the Institute of Psychiatry at King's College London and what could be the possible risks of such a treatment.

A hallucinogen found in magic mushrooms can reset the brains of people with untreatable depression. That’s what a new study by a team at Imperial College London revealed.

During the study the scientists gave 19 patients a single dose of the psychedelic ingredient called psilocybin. The team performed brain scans before treatment and then the day after. The results showed that the depressed brain was being clammed up and the psychedelic experience "reset" it.

However, the study had no control group of healthy people with whom to compare the brain scans, and the Imperial College London team warns people against self-medicating.

“It has a long history in recreational use and the idea that it might actually benefit some patients with depression is truly exciting,” Professor Mitul Mehta from King’s College told Sputnik.

He further explained how the psilocybin affects the human brain saying that it reduces the blood flow to many parts of the brain which thinks “about the self”. It also changes the “way brain areas talk to each other” and that essentially helps those people who are depressed.

“We don’t know how effective it’s going to be but what we are learning now is that there is a possible control treatment, but we need a long term study to see how patients react over a long period, to see if these changes are sustained,” the professor said.

© CC0 / Pixabay
Mental Reset: This is How Magic Mushrooms Treat Depression
The team gave the psilocybin compound to a group of 19 patients and the treatment was found to be largely successful — about half of the group reported feeling well just five weeks after the ingesting the medication.

The team also acquired additional data on mental activity via brain scans. The scans confirmed the previous year's finding that psilocybin reduces blood flow in the area of the brain called the amygdala the area responsible for processing emotion — primarily those qualitatively assessed as negative, such as anxiety and fear.

Mehta however noted that, “not everyone responds well to such medications as people have side effects to it. We should not be satisfied with the current treatments and we should consider more options and this is a part of that journey.”

Talking about the risks of this treatment, the professor said that opiates are risky and addictive but they are also helpful in relieving pain, so they have to be managed very carefully.

“For psilocybin we need a special license to run these studies and without them we cannot do this research. It is important to overcome these barriers so that research can be done,” Mehta said.

Earlier the Guardian reported Professor David Nutt, director of the neuropsychopharmacology unit in the division of brain sciences, and senior author of the paper, as saying, "Larger studies are needed to see if this positive effect can be reproduced in more patients. But these initial findings are exciting and provide another treatment avenue to explore."