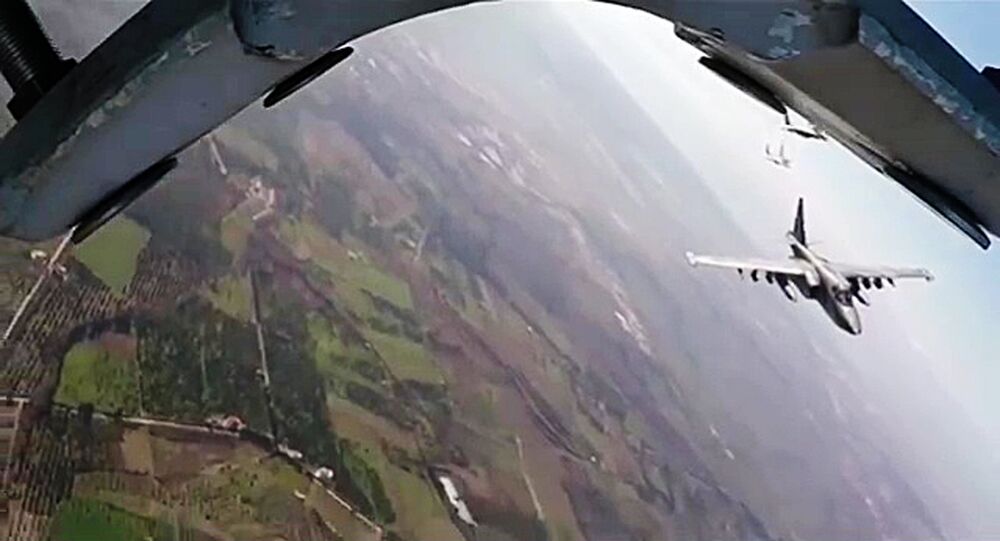 The willingness of the United States to allow Syria’s armed forces to eliminate the weakened Daesh terrorists is a testament to the success of Moscow’s policy of supporting the government of Syria, analysts told Sputnik.

WASHINGTON (Sputnik) — The United States does not care whether the Syrian forces or the US-backed forces will destroy Daesh in their last remaining strongholds in Syria, Joint Staff Director Lt. Gen. Kenneth McKenzie told reporters on October 5.

McKenzie said the US priority was completing the elimination of terrorists in the Euphrates River Valley.

Russian Intervention Proved Vital in Outcome of War in Syria

McKenzie’s comments amounted to an acknowledgment of the success of Russia’s policy of cooperating closely with the government of Syrian President Bashar Assad in defeating the Daesh, Australian foreign policy analyst Crispin Rovere explained.

"While many in the West criticize Russian methods and alleged motivations, none can argue Russia's effectiveness," he said. "Evaluated in its totality, Russia's intervention has been the most important stabilizing factor in Syria since hostilities began."Russian policy in Syria had been clearly focused and consistent in its goals and methods Rovere recalled.

© REUTERS / Erik De Castro
Syrian Raqqa to Be Fully Liberated From Daesh Within 2-3 Days
"Russia reinforced the Syrian government and cooperated with allied elements from Iran and Lebanon to defeat Daesh and other extremist elements," he said. By contrast, the United States and its allies had pursued misguided and inconsistent strategies, changing direction as successive policies failed, Rovere observed.

"Early during the Syrian Civil War Coalition forces demanded the removal Bashar Assad and supported rebel forces, many of whom turned out to be Daesh and al-Nusra extremists," he said. When that policy became increasingly embarrassing to Washington, the United States tried to find or invent so-called "moderate" elements to support in Syria, but that proved futile too, Rovere noted.

"Once it became obvious that Daesh was the true enemy, US strategy shifted to supporting so-called 'moderate rebels' without coordinating with the Syrian government. This strategy was a mirage that made a volatile situation worse," he said. However, while the United States pursued inconsistent and unrealistic political policies, Russia remained clearly focused on working closely with the Syrian government to militarily smash Daesh, Rovere commented." Russia's intervention in Syria had a dramatic effect, pushing back Daesh in Syria and critically weakening it in Iraq," he said.

© Sputnik / Mikhail Voskresenskiy
US Coalition Denies Accusation of Reduced Intensity in Fight Against Daesh - Spokesman
By February 2016, Russia was performing seven times the number of airstrikes as the United States, and was highly effective at disrupting supplies of oil and revenue flowing to the Daesh’s self-proclaimed caliphate, Rovere pointed out. "Russia's contribution has resulted in the recapturing of the ancient city of Palmyra and significantly restored Syria's territorial integrity. The weakening of the terrorists in Syria and the loss of critical supplies and revenue has played a significant role in the recapture of Mosul and most of Raqqa," he said.

Following General McKenzie’s comments last week, the US government needed to finally recognize the reality that President Assad remained the legitimate and effective leader of Syria, Rovere maintained. "In order for peace to prevail in Syria there needs to be a government to negotiate it. Bashar Assad is not beyond criticism, but he has support among a significant portion of the Syrian people and has protected Syria's minorities, Alawite and Christian, from Sunni extremism," he said.

Without Russian backing, Syria would fail as multiple factions continue to engage in a protracted and bloody civil war, Rovere cautioned.

US Seeks to Exploit Daesh Defeat to Stay in Northeast Syria

The United States now wanted to take advantage of the weakness of the Daesh to establish control of northeast Syria in its place, Durham University School of Government and International Affairs Associate Professor Christopher Davidson in the United Kingdom commented.

© AFP 2021 / Omar haj kadour
Russia Tends to Think Chemical Attack in Syria's Khan Sheykhoun Staged
"My reading of the situation is that the US-backed forces have now already laid claim to the areas of Northeastern Syria that are strategically useful and viable for them to hold on to," Davidson said. Also, Washington recognized the fanaticism of the remaining Daesh fighters and wanted to leave the potentially high casualty job of mopping them to the Syrian Army, Davidson suggested.

"Heavy-fighting in the Euphrates Valley, including pockets of urban Daesh resistance in Deir ez-Zor, is likely to be bloody, and, as far as I can see, is being left to the Syrian government forces," he said.

However, Davidson cautioned that McKenzie’s comments were unlikely to be followed by any increased US-Russian cooperation over Syria, or in fighting the terrorists.

"I doubt there will ever be significant US-Russia cooperation over Daesh… It is more a case of a new reality on the ground in this particular theater of operations now necessarily limiting US ambitions," he said. Washington did want to make any additional military commitments in Syria either, Davidson advised. The Trump administration therefore required "that US assets do not become overstretched, or in control of territory they cannot hold on to," he said.

© AFP 2021 / DELIL SOULEIMAN
Evidence of US Alleged Support to Terrorists in Syria, Iraq Continues to Emerge
However, General McKenzie’s comments did reflect a more limited and sober approach to the Syrian conflict that President Donald Trump was trying to apply in contrast to the wider ambitions of his predecessor Barack Obama to topple the Syrian government, Davidson remarked.

"In some ways this does signal a shift in US policy, from the Obama/Clinton regime change strategy to a more realistic, next-best-thing 'hold on to what we can' Trump strategy," he said.

Syria has been engulfed in a civil war since 2011, with the government forces fighting opposition groups as well as extremist forces. The international community has organized two platforms to explore reconciliation between the government and the opposition, in Geneva and Astana.