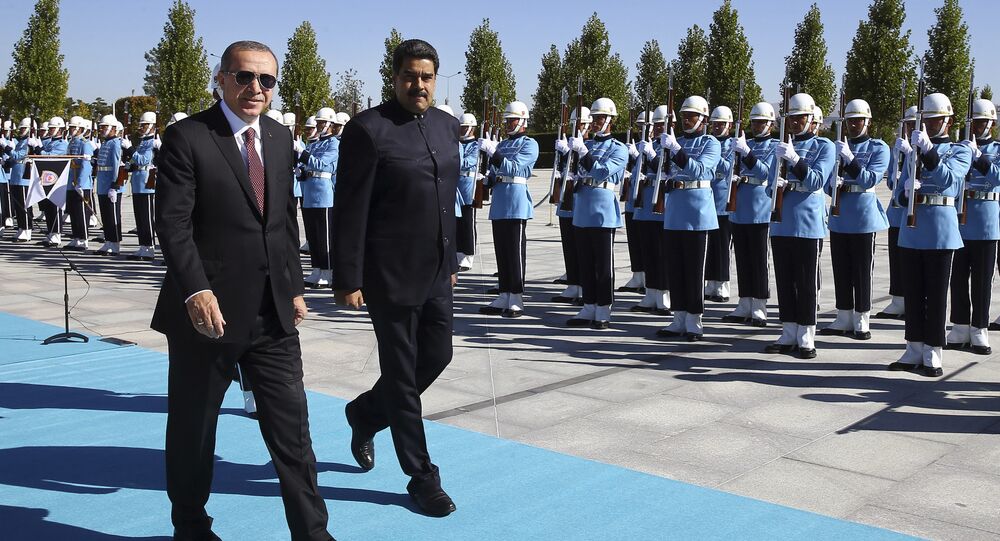 During its visit to Ankara, the Venezuelan delegation led by President Nicolas Maduro signed several agreements on bilateral cooperation with its Turkish counterparts. Sputnik spoke to political and international affairs experts to find out what factors have contributed to the growing rapprochement between the geographically distant countries.

In the course of its visit to Turkey last week, the Venezuelan delegation signed five cooperation agreements in areas including agriculture, air travel, culture, international crime and tourism. Officials also engaged in discussion on the potential to deepen energy cooperation and military industry ties.

Alexander Kharlamenko, director of the Institute of Latin American Studies at the Russian Academy of Sciences, told Sputnik Mundo that it was important to note off the bat that despite their geographic remoteness, Latin America and the Middle East have been linked by blood since the late 19th century. In that time, a large community of migrants came to Latin America from the Middle East, all of them invariably classified as 'Turks', since they arrived from the old Ottoman Empire. These migrants successfully integrated into their newfound homes, often taking up positions of political and economic power and forging new links with their historic homelands.

According to Kharlamenko, probably the main factor encouraging Venezuelan-Turkish rapprochement today is the growing diplomatic standoff between Ankara and Washington. The suspected US involvement in last year's coup plot in particularly has forced Turkey to reassess its priorities, he said.

Observers commenting on the US-Turkish visa crisis have said that the old strategic partnership between Washington and Ankara is now close to reaching the stage of "unresolvable contradictions," possibly even threatening Turkey's place in the Western political and military alliance.

Except it's a #NATO ally pic.twitter.com/AmqliG0A7G

​Venezuela and Turkey are important geopolitical players in their respective regions, Khalamenko noted. The two countries have a shared interest in the concept of a multipolar world, something mentioned by officials during Maduro and Erdogan's joint press conference after their meeting.

"It's clear that Venezuela, which is subjected to severe pressure from the United States, and Turkey," whose alliance with Washington is fading, "are interested in the principles of a multipolar world," the analyst said. "Erdogan even spoke out against US plans for military intervention in Latin America, saying that this would only aggravate the situation."

© Sputnik / Sergey Malgavko
Visa Crisis, S-400s: 'US May End Up Slapping Turkey With Russia-Style Sanctions'
Erdogan's comments were a direct response to comments made by President Trump earlier this year. In August, Trump told reporters that he wouldn't rule out a "military option" in Venezuela as a means to addressing that country's political crisis.

Former Venezuelan presidential advisor Sergio Rodriguez Gelfenstein told Sputnik that neither Venezuela nor Turkey have sufficient international clout to create their own geopolitical poles or centers of power. Accordingly, he said, "the only way for these two countries to participate [in the multipolar world] is to form blocs. In the case of Venezuela, a Latin American bloc, and Turkey's, a Middle Eastern bloc."

Kerem Ali Surekli, leader of the Venezuela Friendship Group in Turkey's parliament, stressed that bloc politics aside, Ankara and Caracas have the same broad priorities in international affairs. "Turkey and Venezuela are two countries that oppose foreign interference in their internal affairs, and strive to stand firmly on their own two feet, pursuing an independent policy in line with their own interests. This is an important point," Surekli said.

The politician noted that economics is the primary area where Turkish-Venezuelan cooperation can manifest itself.

Venezuela is facing increasingly stringent economic sanctions levied by the US, giving it the impetus to diversify its economic ties with other countries. In the case of Turkey, influential economic interests, which largely support President Erdogan, do not share US and EU visions for their country, which gives them significant maneuverability when it comes to cooperation with other countries.

​"The working trip has been successful, with agreements reached at the expanded meeting of ministers of Venezuela and Turkey."

© REUTERS / Miraflores Palace
'I'm Doing Something Right': Maduro Thanks 'Empire's' President for Making Him Famous
Speaking to Sputnik Mundo, Turkish politician Yunus Soner explained that Turkey is already investing significantly in some sectors of the Venezuelan economy, including construction. For example, Turkish companies have helped to build some 3,000 homes in the framework of Venezuela's affordable housing initiatives.

Soner said it was significant that both countries have shown a willingness to do business without using the US dollar. "During the period of American hegemony, Venezuela built an economy that was highly dependent on oil, while all other industries were left in a deplorable state. Now, Maduro wants to correct this state of affairs, and is looking to countries like Turkey, which have significant productive potential. It will be possible to continue this process via payments not in dollars, but in national currencies, or through barter, and Turkey can make major investments in Venezuela," the observer said.

HE President @NicolasMaduro of #Venezuela is leaving Turkey after a busy but a fruitful official visit pic.twitter.com/1PUUSUjqaz

​Finally, according to Kharlamenko, the other major factor linking the countries is their shared interest in ensuring stability throughout the Middle East – Ankara due to the waves of migrants it faces when the region is faced with unrest, and Venezuela because instability in the region affects the cohesion of the Organization of Petroleum Exporting Countries (OPEC), and consequently, oil prices.