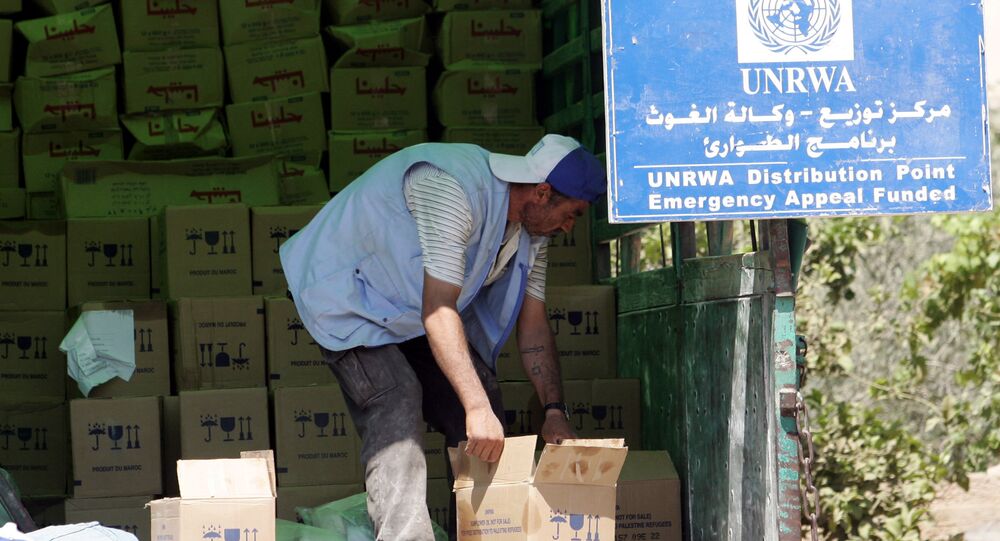 Before Israel decided to withdraw from UNESCO in October, Prime Minister Benjamin Netanyahu had called for the dismantling of another UN agency – UNRWA, which aids Palestinian refugees. In both cases, the prime minister cited anti-Israeli bias as the reason why the country is unsatisfied with the UN agencies' agenda.

In an interview with Sputnik Mick Napier, chairman of Scottish Palestine Solidarity Campaign, has revealed why Israeli Prime Minister Benjamin Netanyahu appears so focused on dismantling a UN aid agency and how the Israeli settlement expansion in the West Bank affects the peace process in the region.

Sputnik (Matthew Ayton):  So, just to begin with could you explain just how important the United Nations Relief and Work Agency (UNRWA) for the Palestinian people both inside occupied Palestine and outside is.  Because it seems Mr. Netanyahu sees it as somewhat of an irrelevance?

Mick Napier (MN):  It’s not an irrelevance if you rely upon that agency for the bare essentials of life; oil, wheat, rice and so on.  It’s an absolute life line for Palestinians, who in some parts of the Middle East have no other source of support.  So for example, Palestinian refugees in Lebanon are prevented from working in many, many areas of the economy.  So it’s absolutely critical and Netanyahu, of course, is extremely hostile to it.  Because his solution to the Palestinian refugee problem is that they should simply disappear, that they should be scattered to the four winds. And if they don’t do so in any particular given situation, then his solution is to increase the pain and the suffering, so that they will be forced to move.  Preferably out of the Middle East, but the main thing is that they should lose their identity as Palestinians who have been expelled from Palestine.

Sputnik:  So, let’s just say for a moment, we’re living in Prime Minister Netanyahu’s ideal world and the aid agency was to be dismantled.  How would this affect the millions of Palestinians that rely upon it?

MN:  Well it would be yet another catastrophe.  It’s worth reflecting on Netanyahu’s ostensible reason for wising the UNRWA to be closed down.  He talks about incitement and he says it’s a ‘nest of incitement and hostility towards Israel.’  Well glory be, one wonders why people that have been driven out of their homes by fire and sword should feel hostile to the people who did it.  And incitement in the Israeli lexicon simply means that the people who have been driven from their homes and who, under international law, have an inalienable right to return to those areas from which they have been driven, thinking at time it was only temporary, that people should cling to those rights.  So what Netanyahu means by incitement is people who demand their rights under international law.

Sputnik:  He also said it perpetuates the Palestinian refugee problem.  What does he mean by that?

MN: Well, he means that under the Zionist plan ever since the days of Herzl, I believe Herzl used the phrase ‘the poor should be spirited, silently across borders and out of the region.’  Netanyahu thinks that UNRWA contributes to Palestinians not disappearing completely, and he is right.

© REUTERS / Cathal McNaughton
End ‘Trade in Death’: Ireland Pro-Palestine Petitions Demand Arms Embargo on Israel
But the problem is that if Netanyahu were to be successful, the different malign forces around the world who do think about solving their problems of having the wrong kind of people within their borders.  Be it Burma or anywhere else, they will look to Israel as inspiration, so any successful ethnic cleansing operation can inspire people to emulate it.  And that is one of the reasons why we should really support the Palestinian right to return to their homes.

One solution is to not increase the pain level on the Palestinians, which Israeli historian Ilan Pappe, says in Gaza, ‘amounts to incremental genocide’, and that they be allowed to return to their homes.  Palestinian academic Salman Abu Sitta has shown how the great bulk of the villages from which they were expelled, remain empty, remain barren, have been demolished and semi obliterated.  But they’re still not really under tarmac or under universities, they’re empty and a state like Israel who are world leaders in absorbing incomers and certainly has the ability to accommodate and absorb the Palestinian refugee population.  What prevents it from happening is naked racism – that they are the wrong kind of people and they must not be allowed to return.  So that Palestine be emptied and made available to Zionists Jewish immigrants from the entire world.

Sputnik:   Surely the dismantling  of the agency would be a self-defeating policy for Israel.  As millions of Palestinian people, such as the two million in the besieged Gaza strip, would suddenly find themselves in dire shortage of necessities such as; food and medicine even more than they already do. Potentially pushing many of them toward militancy, so it seems like this could end up being a self-defeating move for Israel, don’t you think?

MN:  Well I think that Israel is often happy to face military confrontation.  Not always, not in Lebanon in 2006. They are usually pretty happy to provoke Palestinians to a military response, which they can then crush. So I don’t think it’s an accident.  I think that Netanyahu’s game is too often to push the Palestinians passed breaking point.  Where I think a possible solution would lie is internationalizing the issue, not just the UN but civil society around the world coming to the aid of the Palestinian people.

They are a little bit crazy in Israel these days.  We have openly genocidal elements inside the Israeli government; Lieberman who called for every Palestinian prisoner to be killed and Ayelet Shaked, the Minister of Justice who posted genocidal material on her Facebook.  It is openly discussed in Israel, that these are solutions to what they call ‘the Palestinian problem.’  Israel really ought to beware what they wish for.  They have already extinguished any hope of a Palestinian state.  It’s becoming increasingly clear that opportunity has gone, that train has left.  And now, they really do face the prospect of a single state, where a furor will arise around the world for an end to the apartheid structures and for equality.

There is a sense that they are cutting off the branch of which they are sitting, both in terms of the geo politics of extinguishing the hope of a Palestinian state and then also trying to extinguish UNRWA.  But you’re absolutely right it would destabilize the entire region and that may be very well the Israeli plan.

Sputnik:  Finally, Israeli Defense Minister Avigdor Lieberman, who you mentioned a moment ago there, told journalists  that this year, Israel plans to advance 8,345 settler homes in the occupied West Bank, 3066 of which are slated for construction as soon as possible. Some might argue that this is far more destructive to the peace process, than food supplies given out to Palestinian refugees by the UN agencies.  What do you think?

MN: They are not in competition.  The peace process is already a complete charade.  It’s a fiction which the Israeli’s cling to, which they wish to continue for as long as they possibly can.  Because while they are sitting at a table with any Palestinians, discussing the division of the cake.  They simply insist on their right to eat the cake, to consume the cake, while the discussions are ongoing.

The settlement expansion is part of the ‘so-called peace process’ but it really is a charade and the Palestinians have received nothing from the peace process other than pain and continued dispossession.  So the settlement expansion by Avigdor Lieberman, the ex-nightclub bouncer from Moldova who is the Minister of Defense, and their calls for shutting down UNRWA and numerous other provocations and the full spectrum of criminality of what Israeli does to the Palestinians, is designed to yield the entirety of Palestine to the Zionists colonization project with the minimum, hopefully no Palestinians at all.