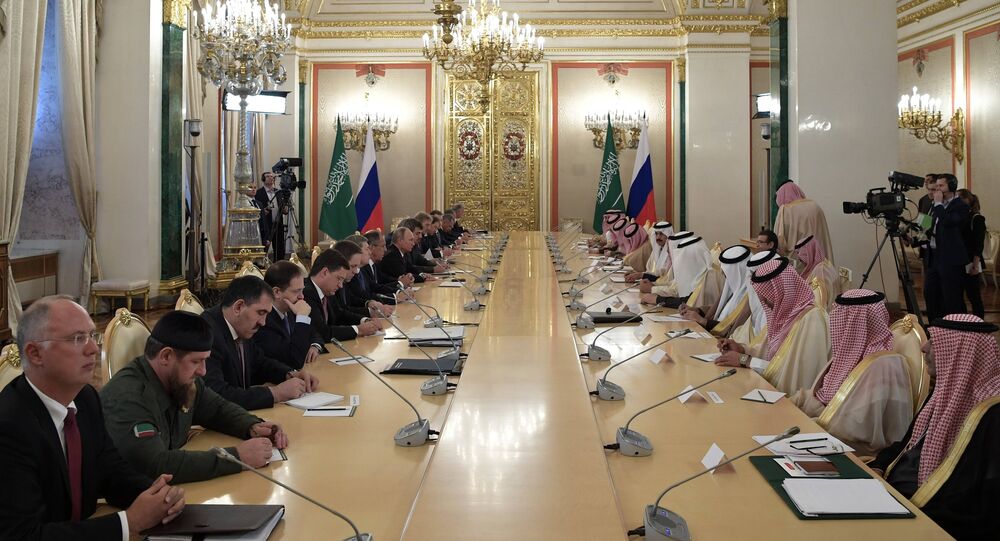 The Federal Service for Military-Technical Cooperation (FSMTC) has confirmed that Moscow and Riyadh reached a deal on the supply of S-400 missile systems during last week's visit to Moscow by the Saudi King. Speaking to Sputnik, international affairs expert Fahad Nazer said the deal speaks to the two countries' "multidimensional relationship."

On Monday, the FSMTC confirmed that the two countries had agreed on the supply of S-400s, as well as Kornet-EM anti-tank missile systems, TOS-1A heavy flame tanks, AGS-30 grenade launchers and Kalashnikov Ak-103 assault rifles.

Asked to comment, Nazer, a fellow at the National Council of US-Arab Relations, told Sputnik that the deal is "a testament to the importance that Saudi Arabia accords Russian relations."

"I think they see it as an important, multidimensional relationship that is also mutually beneficial on many relations," the expert said.

Specifically, Nazer noted that Riyadh has come to the realization that many of the challenges it faces are global in nature. "Toward that end, it has really gone on a diplomatic offensive to strengthen relations with countries all over the world – neighboring countries in the region, regional countries, and global powers, including Russia, China, India and the United States. This is consistent, and I think all of this serves Saudi Arabia's national interests well. You see this with some of these agreements that were signed with Russia last week."

Asked what specific factors may be behind Riyadh's search for new weapons suppliers, Nazer said that it has to do with the country's security concerns and the instability along its borders.

© REUTERS / Khaled Abdullah
Houthis Shoot Down US MQ-9 Reaper Drone in Yemen (VIDEO, PHOTO)
"Saudi Arabia lives in a fairly dangerous neighborhood; the region has seen unprecedented political turmoil and violence over the past few years. Obviously, the most serious threat to the south of Saudi Arabia is in Yemen, where the violence continues, and where Houthi rebels and their allies have lobbed dozens of missiles into Saudi territory. So it should not come as a surprise that Saudi Arabia is doing everything it can to defend its airspace, its borders and its waters. To that end it has tried to strengthen all its armed services," including through these arms deals with the US, Russia and other countries.

Riyadh is "well within its right to take every necessary precaution to ensure that its borders, airspace and waters are as secure as possible," Nazer added, especially in light of the country's regional rivalry with Tehran.

© Sputnik / Vladimir Pesnya
Russia Receives No Response to its Proposal to Mediate Saudi-Iran Talks
Ultimately, the observer said that the region's stabilization in the long term will require peace in Iraq and Syria and the defeat of the Daesh and other terrorist groups in those countries, particularly in Iraq, which shares a border with Saudi Arabia.

Nazer said he was "hopeful overall" about the future of his country and the region, given that the Middle East and Saudi Arabia have predominantly young populations, and ones that are becoming more educated and ambitious, and have access to information and technologies which previous generations did not.