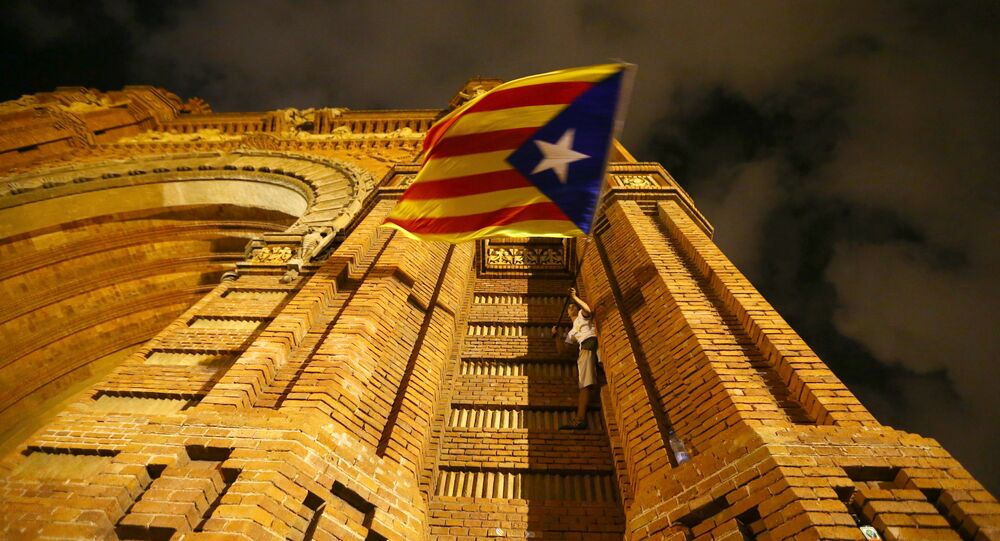 'Let Them Wait More': How Catalonia's Crisis Can Be Resolved

On October 11, Madrid asked Catalonia to explain whether it had declared independence. It could be perceived as the government's attempt to start negotiations amid the critical situation, Mexican expert Luis Huacuja told Sputnik Mundo.

He said that Spanish authorities are considering applying the constitution's Article 155, which will allow Madrid to intervene in Catalan affairs and call the shots in Catalonia.

Huacuja also described an "inaudible proclamation of Catalonia's suspended independence" as an "act of prudence at such a tense moment."

"The sides still have time to reach a mutually beneficial agreement, but political costs are already there. Different forces in Spain and Catalonia will have to work with the Catalan issue, which has reached the international level," he said.

He said that "Spanish authorities went nuts at the time, stepping on the path of unjustified violence."

"[Spanish Prime Minister] Rahoy and King Felipe VI will have to pay a heavy price for this, including in the international arena. Such behavior can put call things into question, including the existence of the monarchy and the existing alignment of forces in the political system," the expert said.

© Sputnik / Alexey Vitvitsky
Voting at a polling station in Barcelona during a referendum on Catalonia's independence. File photo

According to him, Madrid and Barcelona will now have to proceed with talks "very carefully" because much is at stake. Huacuja said that the way Catalan leader Carles Puigdemont announced and then postponed his region's independence has already infuriated many independence supporters.

"Of course, Catalonia's authorities are still analyzing the Spanish PM's words. Perhaps, the time is not ripe to take the next step. The Catalans have waited for 300 years so let them wait more. The best way to get out of the impasse is to hold a referendum agreed upon with Madrid," Huacuja concluded.

On Wednesday, Spanish Prime Minister Mariano Rajoy said that the government had formally asked Catalonia if it had declared independence, in the wake of after Catalan leader Carles Puigdemont's speech earlier this week.

© AFP 2021 / PAU BARRENA
Spanish police officers drag a man as they try to disperse voters arriving to a polling station in Barcelona, on October 1, 2017 during a referendum on independence for Catalonia banned by Madrid

He said that millions of Catalans believe that their region should become an independent state and asked for the mandate to declare it a sovereign state.

At the same time, he added that Barcelona delayed any declaration of independence in order to continue its talks with Madrid.

© AFP 2021 / JOSEP LAGO
President Carles Puigdemont Says Millions of Voters Believe Catalonia Should Have Own State (VIDEO)
Rajoy, for his part, said that the situation with the declaration of Catalonia's independence should be clarified before any step is taken under Article 155 of Spanish Constitution, which allows the central government to meddle in the affairs of its autonomous regions.

However, Rajoy declined to elaborate on whether Madrid would assume direct control of Catalonia.

During the October 1 vote, 90.18 percent, or more than 2.28 million voters, supported the secession of Catalonia from Spain, with a turnout exceeding 43 percent. However, Madrid refused to recognize these results.

Catalonia Will 'Close Door to Dialogue' With Spain by Declaring Independence