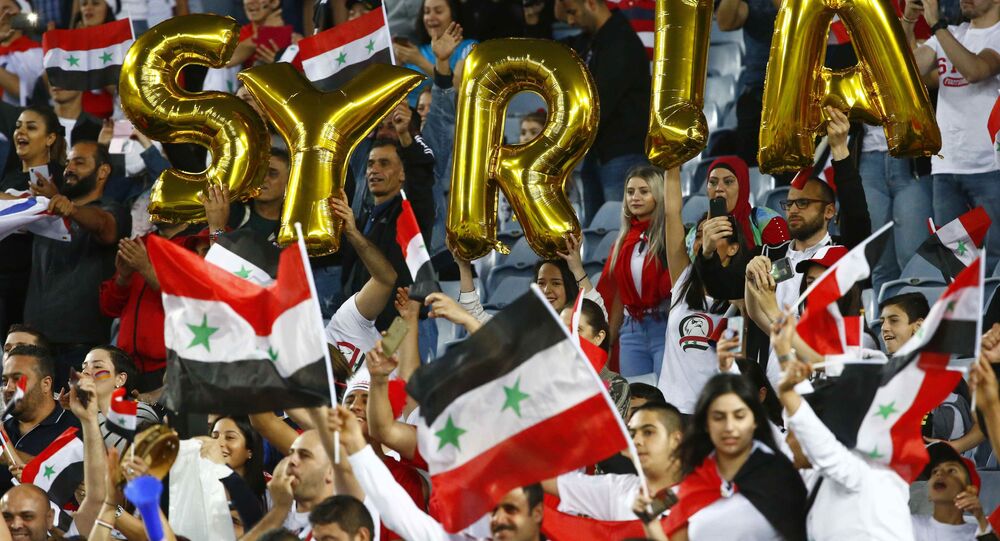 Although Syria's national football team was ultimately knocked out of the World Cup qualification process by Australia on Tuesday, October 10, the squad still achieved an impressive feat, having made it so far despite the ongoing conflict, and low levels of funding.

Syria's qualification effort for the 2018 World Cup was directly hindered by the raging war, with home games played in Malaysia, around 7,000 km away from the war-torn nation, due to safety concerns.

A small number of avid fans regularly made the journey to spur on the Qasioun Eagles.

Like the country's secular armed forces and government, the Syrian national football team is comprised of players from across Syria, with varying religious beliefs and backgrounds.

© Photo : Lenta
Football Fail: Syria's World Cup Hopes Crash After a Shot Against the Post
Despite being unbeaten in its previous eight outings, Syria was largely pegged as the underdog, and narrowly failed to progress to the next, and final stage of the qualification process for the 2018 World Cup, which will be hosted by Russia.

The second leg of the crucial World Cup qualifying play-off with Australia in Sydney was officially Syria's away game, though more fans attended this event than any previous match held in Malaysia, as Australia is home to a significant amount of Syrian diaspora, most of whom migrated before the nationwide conflict erupted in 2011.

"Cannot quite believe the number of Syrians inside the ground. They've got a huge support behind one of the goals. Flags being waved with gusto. What a sight. Don't think I've ever heard their national anthem before either. It's very forgettable in truth…," a sports commentator for ByTheMinute.com posted on the platform's live text highlights of the match.

Syria was also supported by many non-Syrians on social media, including footballers and commentators.

Syria should be so proud of what they've achieved. Heartbreaking to see players so broken, but their journey has won the hearts of so many. pic.twitter.com/Ksmb6nEQav

The match, and Syria's wider football campaign, didn't escape the politics of the Syria crisis, with controversy erupting over the decision to only allow the official Syrian national flag into the stadium, not the green variant, which is often associated with opposition forces.

Syria's valiant effort to qualify for the World Cup isn't just an example of a sporting success. It's an indication of the nation's stance and resistance to terrorism, with daily life continuing in spite of the violence, and associated dangers.

On Wednesday, October 11, just a single day after the game, Damascus was hit by three suicide bombers, killing 9, and injuring over 10 additional civilians. Two bombs targeted a police HQ, while the third and final device was detonated near a busy market situated near the police station.

In defiance of these recent attacks, and the broader conflict, restaurants and bars in government-held areas continue to bustle, while nurseries and universities continue to operate, and cope with the additional challenges the conflict has brought about.

Syria's World Cup dream is over, but, more importantly, pro-government forces are continuing to make progress against Islamist terrorists on several fronts, inching the country closer to peace and stability.

During the latter part of 2017, pro-government focussed their efforts on retaking the eastern, oil-rich province Deir Ezzour from Daesh terrorists.

Operations led by the Syrian Arab Army (SAA) in the province, which borders Iraq, have resulted in the lifting of the multi-year siege on Deir ez-Zor city and the liberation of thousands of square kilometers of territory, as well as several oil fields.

Football Fail: Syria's World Cup Hopes Crash After a Shot Against the Post

Awkward Guests? Ukraine Improve Chances of Making It to the World Cup in Russia