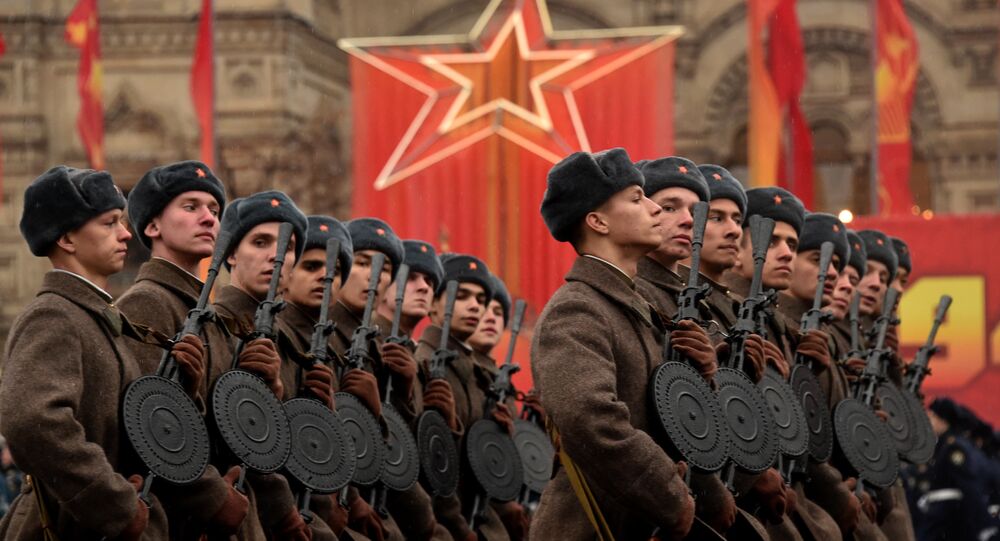 Fake news appears to have lost its luster for the Washington Post, which has gone a step further and decided to stretch to some fake history; a recent op-ed presenting a distorted account of the Soviet Union has caused much discussion and criticism on social media.

Hot on the heels of claiming that "Russian operatives" aimed to spread disinformation on the internet during last year's presidential campaign, the Washington Post has sought to bolster its argument with an article about the USSR that has baffled commentators with its complete lack of historical accuracy.

Alleging that Russia has tried to "gin up racial discord" in America, the op-ed piece tries to link this to the history of the Soviet Union. According to author Terrell Jermaine Starr, "none of us should be surprised that Russia exploited American racism to achieve its own foreign policy objectives."

Starr goes on to surprise experts and laymen alike with his assertion that the USSR was a "Russian supremacist state," which "wielded Russian homogeneity against its own minorities during its 70-plus years of existence."

His analysis was roundly criticized on Twitter by Moscow correspondents from the UK's Guardian and Financial Times newspapers, among others.

One of the worst pieces of Russia "analysis" / Soviet "history" I've read in a long time https://t.co/gLuhp0HcXO

This reads like some of my own particularly bad undergraduate essays

​One commentator questioned the Post's decision to go ahead with publishing the piece.

Who allowed this to be published?https://t.co/FKJPESf8pz

Horrible piece of writing, how can @washingtonpost publish such B$? This is an expert f. #ussr/#russia? Seriously? https://t.co/IwNy5DudKc

​Paul Robinson, Professor of Public and International Affairs at the University of Ottawa, explained that the nationalities policy of the Soviet Union was "far more complex" than Starr's presentation.

"Apart from a period under Stalin, [the Soviet leadership was] not strongly inclined towards Russification. Indeed, the Soviet Union promoted the development of minority national identities," he told Sputnik.

Robinson warned that such factually inaccurate articles "spread negative stereotypes rather than understanding, and thus encourage hatred and fear, which in turn lead to hostile policy responses which are unconstructive and even damaging not only to Russia but also to the interests of Western states."

Far from being a "Russian supremacist state," as the Washington Post claims, the Soviet leadership of the Soviet Union pursued a policy of "nativization" (korenizatsiia) during the 1920s and then from the 1950s onwards, which developed the culture and economy of the socialist republics.

Starr fundamentally misunderstands the Soviet project if his argument is that nationality policy centered the Russian Slav.

​​Mass education programs were implemented in local languages, which eventually helped to awaken national self-consciousness across the Soviet Union. The belief that the march towards socialism would one day render nations obsolete contributed to this policy.

Commentators also pointed out that the Soviets' rejection of nationalism was also demonstrated by their rejection of religion, a major factor in national identity.

I would invite Starr to talk to the ethnically Russian priests who put their lives on the line for faith. Supremacy really protected them.

The author is a great "expert" on post-Soviet world pic.twitter.com/MtdX60dGl1

Some users dredged up old posts by Starr, which demonstrate a lack of basic geographical knowledge of the region.

Starr's article refers to the Holodomor tragedy, a famine which killed several million people across the USSR in 1932-33, during the reign of Stalin.

Yasha Levine, an investigative journalist, pointed out that Stalin's policies could hardly have been a result of Russian supremacism, since he was himself Georgian.

You idiot, Stalin was Georgian. https://t.co/3pZxvaMhb6

​Starr also tried to exaggerate the number who died during Holodomor with a claim that "some estimates have that figure [of victims] upwards of 10 million." As his source, the Washington Post journalist cites a contributor in the comments section of The Economist.

Starr's other source is an old man he met in Lviv. The man came up to him and said, "Ukraine is a colony of Moscow and Russia wants to take it back."

Starr said he "welcomed his insight," apparently in the belief that old age and a Ukrainian passport conveyed to this man some inside knowledge from the Kremlin.

In contrast to his readiness to listen to old men from Lviv, the columnist doesn't seem to appreciate any insight from people with a better grasp of Soviet history. Starr boasts of having blocked over 2,400 people on Twitter, as somebody pointed out.

i think if you block 2400 people you're probably not into taking criticism well, whether justified or not. https://t.co/k449uVl79l

My advice to writers out there: write for yourself, not your critics. Someone is destined not to like you.

​​Starr has reacted to criticism by pinning a tweet to his account which advises "writers out there" to "write for yourself, not your critics."