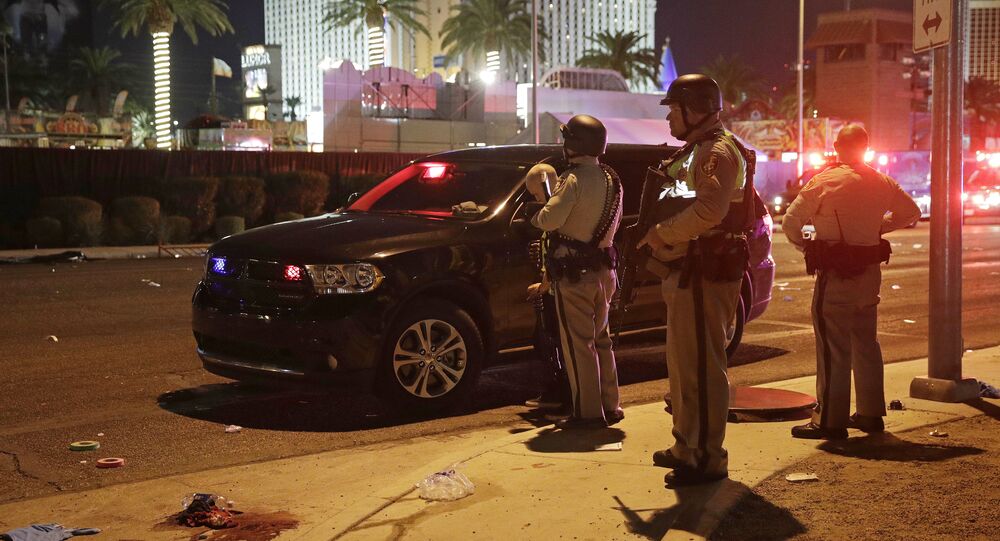 The mass shooting in Las Vegas should prompt American policymakers to take steps to try and prevent such incidents, according to political science researcher at SUNY Cortland Prof. Robert Spitzer. He, however, suggested that the recent tragedy is unlikely to push President Donald Trump to change his stance on gun control.

"After a coal mine disaster, talk turns immediately to how and why it happened, and what steps should be taken to prevent future coal mine disasters. The same logic can and should apply to gun shootings like this one. What are the lessons to be learned, and what policy steps might be taken to minimize such events in the future? It is a proper and necessary question," Spitzer, who authored the book "The Politics of Gun Control," told Sputnik.

The expert also suggested that one of the possible measures that could help prevents such incidents is making the current national check system "more thorough."

© REUTERS / Lucy Nicholson
Police Still Can't Find Motive in Vegas Massacre After Chasing Over 1,000 Leads
He, however, warned, "Checks will never stop everyone with bad intentions, but they do stop some, or at least flag authorities that someone may be suspicious."

Commenting on the possible impact of the Las Vegas massacre on the gun control debate in the United States, Spitzer suggested that two options are possible, including making it illegal to obtain bump stocks or stopping the measure in Congress to weaken gun laws regarding silencers and concealed gun carrying.

Bump stock is a device that can be mounted on a semi-automatic weapon to make it capable of shooting at a rate similar to a fully-automatic one. The Las Vegas shooter reportedly used a bump stock, which made his shooting so deadly.

Recently, a group of Democratic senators launched an effort to ban the sale and possession of bump stock equipment. While the purchase of automatic weapons is strictly restricted in the US, bump stocks are legal and can be purchased for less than $200.

At the same time, the expert suggested that the US government is unlikely to take any significant steps regarding gun control after the tragedy.

"I do not believe it will have any material impact on Trump’s policies," he said.

On the night of October 1, Stephen Paddock, 64, opened fire on a country music festival from his room on the 32nd floor of the Mandalay Bay Resort and Casino, killing 59 people and injuring more than 500 others. He killed himself before police entered the hotel room.

Police say that the gunman had spent years stockpiling weapons before the attack. He also stored more ammunition and explosives in his car at the time of the attack. Paddock had 23 weapons in the room as well as cameras fixed on the corridor outside which he used to see if security or police were approaching. An investigation is underway, but his motives are as yet unknown.