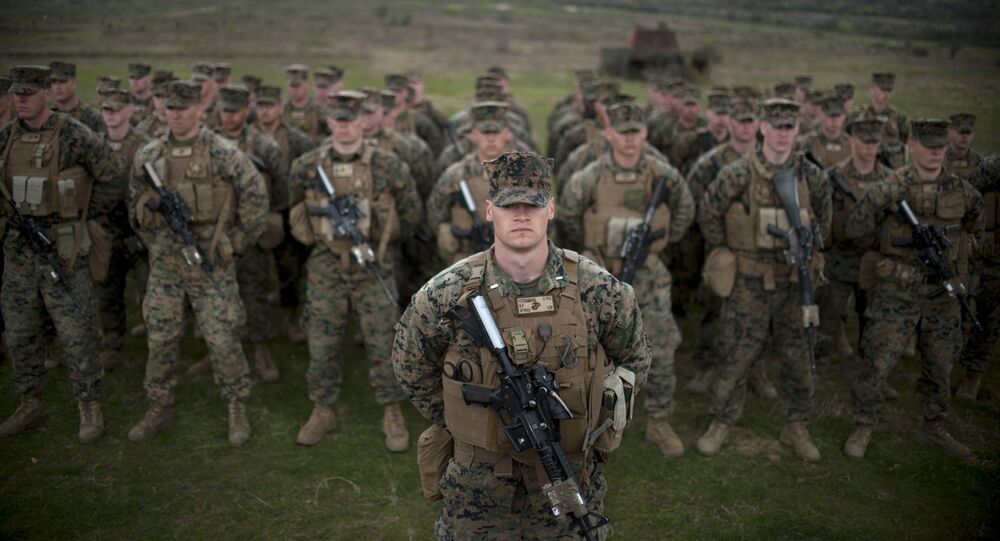 If the EU implements the much-discussed "military Schengen" for US troops it would de facto cede European sovereignty to the Pentagon, RIA Novosti contributor Alexander Khrolenko noted, adding that in that case NATO forces would have no obstacles on their way to Russia's borders.

On Monday Hodges called upon EU member states to create a "military Schengen" — an analogue of the European Schengen zone with no ID control at mutual borders.

According to the US commander, "the alliance needs to be able to move as quick, or quicker, than Russian Federation forces if we want our deterrent capability to be effective."

© REUTERS / Major Jeff Landis,USMC (Ret.)/Naval Base Guam/Handout/File Photo
Pentagon's Power Projection: Most Important US Military Bases Overseas
Lt. General Hodges is, in fact, urging EU member states to cede their sovereignty to the Pentagon, Khrolenko pointed out, adding that the US has already deployed half of its overseas military bases in Europe.

The old continent hosts about 80,000 US troops at 350 American military installations, while 40 of them are owned by Washington.

The EU countries' national borders and their "imperfect" transport system is preventing US "assets" from seamlessly crossing Europe, therefore Hodges wants America's allies to give the green light to US troops, voluntary and unlimitedly, Khrolenko explained, dubbing the trend " colonialism lite."

​Anna Wieslander, director for Northern Europe at the Atlantic Council, a neoconservative US think tank, has also endorsed the idea, saying that the US needs "to move troops across Europe at a much faster pace "because "conflict happens very-very fast."

​Speaking to Deutsche Welle in mid-September, Hodges bemoaned the fact that "he needs to stop at every national — sometimes regional — border and deal with unique controls" when he wants to move tanks and other heavy weaponry across Europe.

"[Putin] is able to move a lot of stuff real fast which is what got my attention and made me start thinking, how do we achieve at least the same speed that he has," Hodges told the media outlet.

© AP Photo / APTV
US' Plan B? From Alleged Evacuation of Daesh to the Murder of Russian General
According to the Russian journalist, the "military Schengen" concept raises justified concerns, especially in light of US war planners' weighing the pros and cons of a potential conflict with Russia.

In April 2017 the RAND Corporation, an influential US think tank, urged the Pentagon to consider options for the 'neutralization' of Russian military systems in Kaliningrad.

Furthermore, in September the Pentagon's "Russian New Generation Warfare Handbook" was released over the Internet. The 68-page document described the authors' vision of strengths and weaknesses of Russian Armed Forces and proposed ways to counter Moscow's military tactics.

Nikolay Lakhonin, the spokesman of the Russian embassy in the United States, voiced concerns that the handbook "included serious assumptions of military clashes between US and Russian armed forces."

"One may not believe in apocalyptic scenarios, but the West is analyzing options for a [potential] war with Russia," Khrolenko remarked.

Additionally, the US is beefing up its military presence in Eastern and Central Europe — in close proximity to Russia's borders — and urging Ukraine to refit its army along NATO standards by 2020.

"Sometimes it appears that the West is merely dreaming of a military confrontation [with Moscow], and trying to provoke Russia into war," he remarked.

© AP Photo / Militant Photo
Russian Aerospace Forces Ready to Prevent Daesh Attacks From Areas Controlled by US in Syria
However, in contrast to the US, which is capable of launching an unmotivated "global strike" against any nation, Russia reserves the right to use its military force (and nuclear arsenal) only as retaliation to external aggression, when all peaceful means to prevent the conflict are exhausted, the journalist emphasized.

On the other hand, Pentagon war planners have apparently forgotten that the US is no longer a monopolist in using high-precision long-range weapons, Khrolenko noted, adding that Russia is now able to successfully "limit access" to many areas of the planet.

Meanwhile, Moscow is developing effective electronic warfare tools, fifth-generation stealth aircraft and anti-ship missiles with a striking range of more than 1,500 kilometers (932 mi), while Russia's capability of rapidly deploying its forces in Syria caught Pentagon officials by surprise in 2015.

"Perhaps, it is time for Europe to give the green light to American troops on their way home, to the US," the journalist concluded.