Closing Border With Iraq Will 'Damage Interests' of Iran and Turkey

Iran has said it had closed border checkpoints with Iraqi Kurdistan in response to its referendum and in respect to the sovereignty and territorial integrity of the neighboring country. Salih Meleomer, an advisor to the Prime Minister of the Kurdistan Regional Government told Sputnik the move could damage the interests of both Turkey and Iran.

The issue of the independence referendum is also expected to top the agenda of Turkish President Erdogan's talks with the leaders of Iran. The Turkish leader is visiting Tehran on Wednesday.

Salih Meleomer has commented to Sputnik Turkiye on Iran's move, saying that if Turkey joins it both countries will experience serious economic losses as it will greatly damage their own interests.

© AFP 2019 / Safin Hamed
Here's 'The One Thing' Iran Wants From an Independent Iraqi Kurdistan
He further noted that for 25 years the Kurdish region has been on very good terms with Ankara, Tehran, Baghdad and other countries and has been developing its economic and trade cooperation.

"We would like to maintain a relationship with Turkey, Iran and Iraq. However if Ankara and Tehran shut down their checkpoints on the border with Iraqi Kurdistan it will inflict serious economic damage to their interests," he told Sputnik.

"Any disputed issues should be resolved through dialogue and negotiations. Baghdad, Tehran and Ankara should not introduce any sanctions against Iraqi Kurdistan. We think that their possible blockade of our autonomy is unacceptable and is not a solution to the problem," he said. 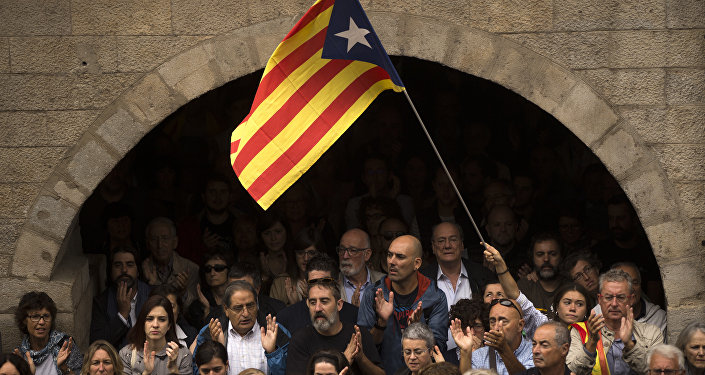 © AP Photo / Francisco Seco
Viva la Independence: Iraqi Kurdistan Backs Catalonia’s Independence Aspirations
There are two positions in Iran regarding Iraqi Kurdistan, he went on to say: a radical and a reformist. The adherents of the first oppose the achievements of the Kurdish people in their fight for their rights, while the reformists respect the results of the referendum and insist on a dialogue with Erbil.

One way or another, the results of the referendum saw the overwhelming majority vote for their independence. The neighboring countries should respect the results and the will of the people, Salih Meleomer concluded.