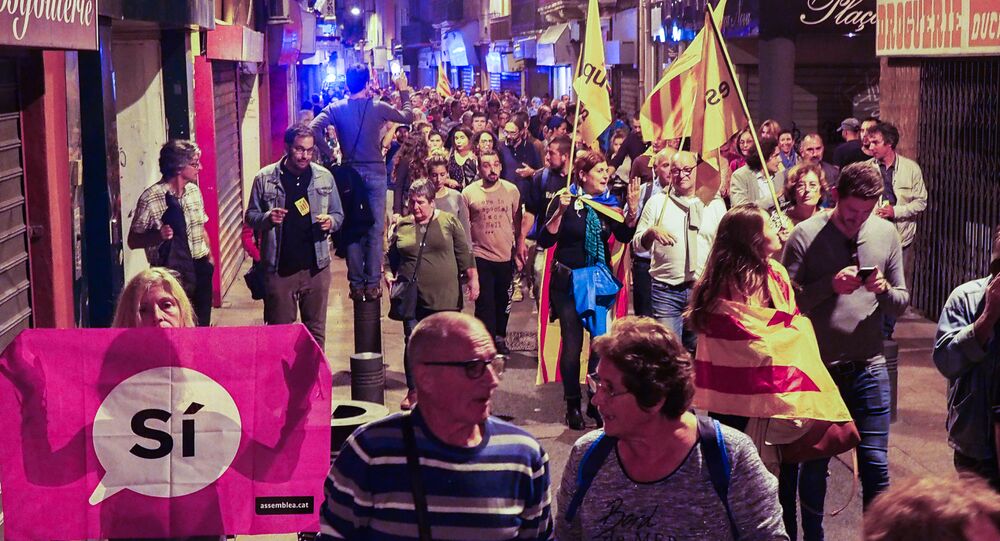 While Paris has taken a dim view of the Catalan independence referendum, members of French autonomist group Breizh Europa praised the vote as an example of the people’s right for self-determination.

Even as French President Emmanuel Macron voiced his support of Spain’s constitutional unity in the wake of the October 1 Catalan independence referendum, the proponents of Brittany’s autonomy welcomed Catalonia’s choice and even sent their representatives to act as observers during the vote.

Caroline Ollivro, president of the autonomist Breton movement Breizh Europa that promotes the concept of an "autonomous Brittany within the federated Europe," told Sputnik France that her group regards the Catalan referendum as a glimmer of hope.

"Our unitary Jacobin state is unable to organize referendums even though all the mechanisms are detailed in the constitution. A French president would never organize such vote because he’s too afraid of the outcome. A referendum on the simple autonomy of a French region, let alone independence, is simply not possible," Ollivro said.

© AFP 2019 / FREDERICK FLORIN
European Parliament Debates Results of Catalonia Independence Referendum (VIDEO)
She pointed out that Breizh Europa has been asking for a referendum on the reunification of historical Brittany (the Loire-Atlantique department and the city of Nantes which used to be part of the historical Brittany currently belong to another administrative unit of France, the Pays de la Loire region). However, the French government continues to ignore these requests despite the fact that “each year opinion polls show that 60-65 percent of respondents support the reunification,” apparently due to concerns that the referendum could be followed by calls for greater autonomy of the region.

Ollivro also added that even if Madrid “currently opposes the events in Catalonia, one day the law would have to be changed” in accordance with the people’s right for self-determination.

"France does not have the kind of cultural and historical unity that is being presented by Paris or the textbooks. The unity of the French nation is determined by the so-called ‘republican unity pact’ which was not brought forth via a referendum. The centralized France is a centuries-old tradition that is being actively supported by a press which strives to diminish the scale of autonomist movements," she explained.

Meanwhile, historian and Catalan affairs expert Garcia Dorel-Ferre told Sputnik that the issue of separatism is a concern for the region as a whole, and lamented that no one in Europe appears willing to deal with this problem.

"Minority issues are not limited to Lombardy, Catalonia and Corsica; the scope of this problem is much greater. There are many countries in Europe that have minorities… with which these countries have to come to accord and to respect their peculiarities. This is a real problem for Europe, and one day this matter needs to be taken seriously," Dorel-Ferre warned.

On Sunday, October 1, Spain's northwestern autonomous region of Catalonia held an independence referendum despite the fact that the vote had been previously outlawed by Madrid, with over 90 percent of more than 2.26 million Catalans who took part in the referendum voting ‘Yes’.

Following the vote, Catalonia's President Carles Puigdemont announced that the region will declare independence in a matter of days.