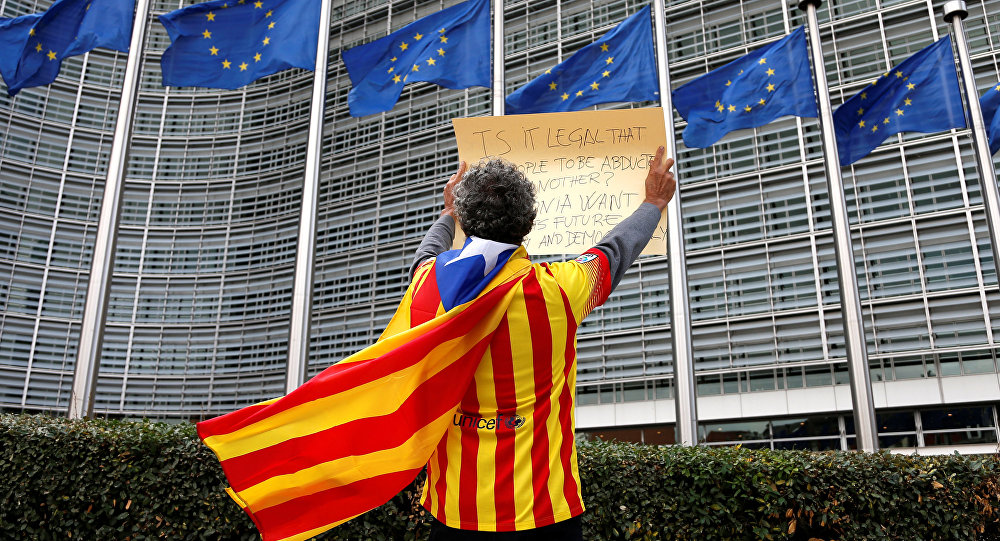 The EU's 'Tough Spot': Why Brussels Is Largely Silent on the Catalan Referendum

EU leaders have remained largely silent on the unfolding crisis in Catalonia, Spain. A Spanish politics expert has told Sputnik Brussels' silence is a testament to the "tough spot" EU leaders are in - and that Catalonian independence could represent the "biggest existential crisis" the bloc has faced in decades.

The October 1 Catalonian independence referendum has been blighted by violent clashes between protesters and police, mass arrests and brutality, and major alleged rights infringements before, during and since — however, European Union leaders have remained largely silent on the fast-developing crisis erupting in a pivotal bloc member state.

Dr. Pablo Calderon Martinez, a lecturer in Spanish politics at Aston University, UK, believes Brussels' silence is a testament to the "tough spot" EU leaders are in.

"The EU's position is simple — Spain is an EU member and Catalonia isn't, so leaders will support the Spanish government. There are also different separatist movements around Europe the EU opposes. If Catalonia achieves independence, which is possible but not likely, it will represent bigger existential crisis to the EU than Brexit or the refugee crisis, or indeed anything it has dealt with in the last 20 years," Dr. Martinez told Sputnik.

Ultimately, the EU's desire for "things to remain as they are" leaves leaders little choice but to support the Spanish constitution, Dr. Martinez said — "no matter how flawed… and despite the unacceptable violent scenes." 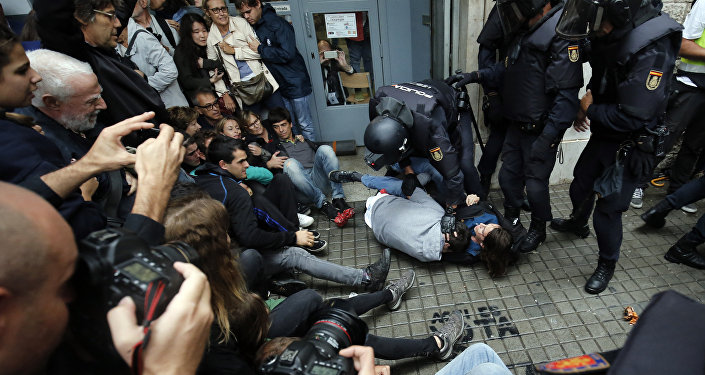 Catalan authorities allege over 800 have been injured in brutal police crackdowns at polling stations over the course of polling day, with leader Carles Puigdemont stating Brussels couldn't continue to ignore the burgeoning crisis, as the rights and freedoms of European citizens were being violated, and the situation in Catalonia was "a matter of European interest."

Nonetheless, his pleas appear to have largely fallen on deaf ears. Perhaps the most high profile EU politicians to comment on the day were former European Parliament president Martin Schulz and Guy Verhofstadt, President of the EU Parliament's ALDE group. Schulz called for de-escalation in his tweet:

Tweet: "The escalation in Spain is concerning. Madrid and Barcelona must immediately de-escalate and seek dialogue."

In a tweeted statement, Verhofstadt said that while he didn't want to "interfere" in Spanish domestic issues, he absolutely condemned "what happened" — although opprobrium was heaped on both sides.

It's high time for de-escalation. Only a negotiated solution is the way forward. Read my full statement on the #CatalanReferendum here pic.twitter.com/v1OMgFJFIj

"On the one hand, Separatist parties went forward with a so-called referendum forbidden by the constitutional court, knowing only a minority would participate. On the other hand, the use of disproportionate violence to stop this. It's high-time for de-escalation. A negotiated solution in which all parties are involved is the way forward," Verhofstadt said.

Statement on the events in #Catalonia — https://t.co/XkrW28XLu6

​An official statement issued by the European Commission echoed Verhofstadt's isolationist tone. Whether it will adopt the role of mediator between Spanish and Catalan authorities seems unlikely.

"This is an internal matter for Spain that has to be dealt with in line with the constitutional order of Spain. If a referendum were to be organized in line with the Spanish Constitution it would mean the territory leaving would find itself outside of the EU. These are times for unity and stability, not divisiveness and fragmentation. We call on all relevant players to now move very swiftly from confrontation to dialogue," the statement said.

However, while the bloc may have been largely mute, member state leaders have flocked to Twitter to voice their condemnation and support.

Belgium's premier Charles Michel was the first — a notable intervention, given Belgium has its own separatist movement in its Flemish region, headed by the country's largest party, the New Flemish Alliance (N-VA), which participates in Michel's government.

Spain is a close ally and a good friend, whose strength and unity matters to the UK. (2/2)

Violence can never be the answer! We condemn all forms of violence and reaffirm our call for political dialogue #CatalanReferendum #Spain

'Condemning violent political repression is not the same as 'interfering' in Spain's domestic politics'
— my comments on #Catalonia pic.twitter.com/B4lTBhfDe1

Let this sink in. An EU state is using armed police to forcibly prevent citizens from voting!
Silence isnt an acceptable response #Catalonia

Scottish First Minister Nicola Sturgeon, whose Scottish National Party has long argued for a second independence referendum after voters opted in 2014 to remain part of the UK, also expressed concern over the violence.

2/2 and call on Spain to change course before someone is seriously hurt. Let people vote peacefully.

With a European Parliament plenary week starting October 2, the parliamentary Green group has called for a debate on the situation in Catalonia.