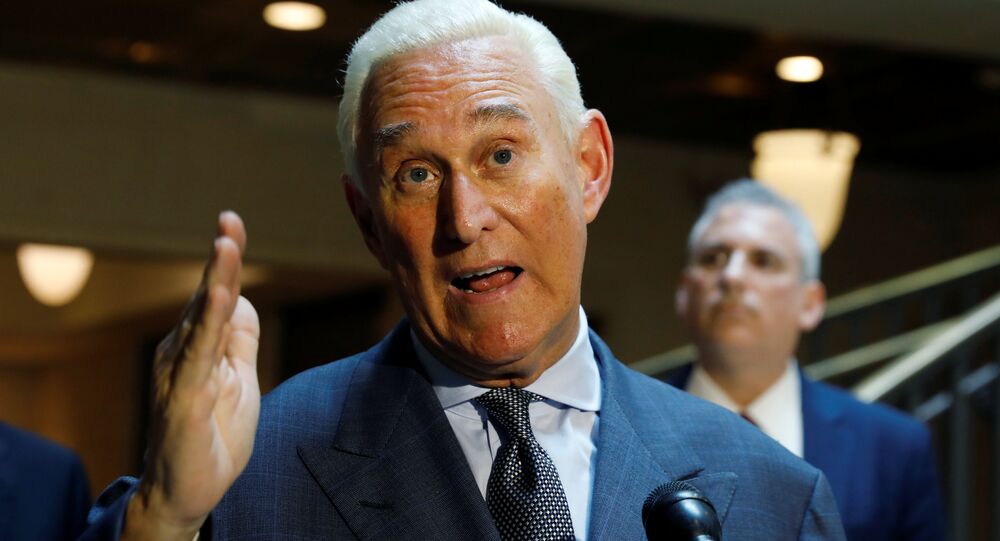 Following his dramatic and colorful testimony before the House Intelligence Committee (HIC) about his alleged ties to Russia, Roger Stone - a veteran Republican strategist and former adviser to US President Donald Trump - popped in on Sputnik Radio to elaborate on his statements.

Stone made his appearance on Fault Lines, hosted by Garland Nixon and Lee Stranahan. The flashy and oft-incendiary strategist detailed what it was like to testify before the HIC, as his testimony was never released to the public. He said that there was a drastic difference in the way he was treated across party lines by the Republicans and Democrats.

"I found that Republicans were very methodical and logical in their questioning," said Stone, who served in the administrations of Republican presidents Richard Nixon and Ronald Reagan. "'Do you know, or have any evidence, of anyone in the Trump family, the Trump entourage, Trump himself, Trump associates, Trump friends, who conspired, or coordinated, or colluded with the Russians, or any Russian, or the Russian state, or any Russian company to affect the election?' Answer: 'No.' Simple."

Meanwhile, "the Democrats [asked me questions like:] 'Do you remember if you've ever erased a tweet that you maybe put up for a few minutes and then took down?' 'Yeah, I guess so.' 'Do you remember anything specific?' 'No not really.' 'Aha! You don't remember this one!'"

The tendentious tweet that Stone deleted was from March 2017. In it he claimed that he "never denied perfectly legal back channel to [WikiLeaks President Julian] Assange who indeed had the goods on [Democratic Presidential Candidate Hillary Clinton.]" On Fault Lines, Stone said that the tweet claimed that "it wouldn't have been illegal for me to speak to Assange if I had."

WikiLeaks was the outlet that released the DNC information, which it maintains was leaked, not hacked, to the public. WikiLeaks has also said that their source for the DNC data was not Russian.

Stone elaborated on his relationship with Assange — or lack of one. "Well, guess what? It wouldn't have [been illegal to talk to Assange]. He's a journalist. Now, I never had any direct contact with him in the year of the election or the year before — but even if I had, that would make me like about 4,000 other journalists who have interviewed him."

The topic of conversation also turned to the controversial entity known as Guccifer 2.0, a hacker who claimed responsibility for the hack of the Democratic National Committee, but has been accused by outlets such as The Guardian and The Washington Post of being Russian. Moscow and Guccifer 2.0 both deny that the hacker is Russian.

Stone communicated with Guccifer 2.0 in August and September 2016, after the hack. Stone also claimed that Guccifer 2.0 was not Russian, and that their communications over Twitter and email were "innocuous."

When asked if he had any idea of the identity of Guccifer 2.0, Stone replied that he had "none whatsoever. In fact, the truth is I'm not even sure it's a person. For all I know, it's a group of people. For all I know, as Trump would say, it's a 300-pound guy sitting around in his underwear."

Stranahan then speculated that it was possible that Guccifer 2.0 was a "false flag" planted by the Democratic party to try to discredit Trump. "The documents that he put out with a Word document were registered to Warren Flood," Stranahan explained. "Warren Flood is the tech rep for [former Democratic Vice President] Joe Biden. In fact, we know that through forensics. I've never heard anyone question that. Now, [that] means that at some point the documents went through that computer, but I don't know what that means either."

Moscow: Russia to Resume Cybersecurity Cooperation With US When Washington Ready

New US Ambassador May Arrive in Russia in Coming Days