The Iraqi Kurdish issue should be solved only through diplomatic means, Israeli political analyst Avigdor Eskin told Sputnik. According to Eskin, one should take into account both the political and economic interests of regional and global players in the region, as well as the unstoppable Kurdish enthusiasm to gain independence.

In case Middle Eastern powers take a military option against Iraqi Kurdistan, blood will flow and a process of self-destruction by most of the region's states will become inevitable, Israeli political analyst and commentator Avigdor Eskin told Sputnik, commenting on the results of the Kurdish independence vote.

On Wednesday, Iraqi Kurdistan's High Elections and Referendum Commission announced that more than 92.73 percent of more than 3 million voters said "yes" to the region's separation from Baghdad.

The Kurdish referendum has triggered protest from the governments of Iraq, Iran and Turkey. The three have signaled that they are ready to consider a wide range of options to tackle the Kurdish secessionism.

What's Behind Iran, Turkey and Iraq's Opposition to Kurdish Independence?

According to the political analyst, the states' motivation is understandable: "While Iraq is losing a part of its territory, Turkey and Iran as well as Syria have every reason to fear that their Kurdish population would try to join their jubilant brethren in Iraqi Kurdistan."

He highlighted that "Turkey is already suffering from an internal armed struggle with the Kurds."

"The situation in Iran is less dramatic," Eskin continued. "However, some fights with radical elements within the ethnic minority are taking place in the Kurdish region of Iran."

And of course, one shouldn't forget about the Syrian Kurds' incentives to gain independence from Damascus, he noted.

"However, this does not mean that the war is the only option," the Israeli analyst stressed.

According to the Kurdish media outlet Rudaw, the Kurdish Regional Government (KRG) started exporting oil to the Turkish Mediterranean export terminal of Ceyhan in May of 2014 after Baghdad "froze payments to Erbil from the national budget as pressure and punishment for trying to go ahead with the oil sales."

Still, according to Eskin, it is unlikely that Turkish President Recep Tayyip Erdogan will deliver on his promise to impose an embargo on the Kurds given the substantial investments Ankara and other powerful players had made in the region.

Why Oil Embargo on Iraqi Kurdistan is Highly Unlikely

As The Financial Times reported on September 21, Ankara has "helped build the KRG's infrastructure, including constructing a $550m airport in Erbil," with about 1,300 Turkish companies having business ties with the autonomous region.

One should also keep in mind that in June 2017 the KRG signed a 20-year-long deal with Russia's Rosneft to cooperate on the exploration and production of hydrocarbons.

In accordance with the agreement, the Russian company "will get access to the major regional transportation system with the throughput capacity of 700,000 barrels per day (bpd)" with the prospect of expanding the existing pipeline up to "1 million bpd by the end of 2017."

Furthermore, Rosneft and Iraqi Kurdistan are planning to launch a pipeline to export gas to Turkey and Europe by 2019.

Besides Rosneft, Russia's Gazprom Neft company is currently engaged in three oil projects in the region.

The other two players interested in the uninterrupted flow of oil from Iraqi Kurdistan are the US' ExxonMobil and France's Total.

Iraqi Kurdistan has an estimated 45 billion barrels of oil reserves and 5.66 trillion meters of natural gas, according to the KRG's Ministry of Natural Resources.

"We can guess that Rosneft, for example, would not have signed the contract for $4 billion if there were no certain assurances from the Turkish side. The same is in the case of major Western companies," Eskin underscored, adding that Ankara's threats were largely directed toward "rebellious Kurds."

The Israeli analyst drew attention to the longstanding alliance between Erdogan and Barzani.

"The Kurds in Iraq and their folks in Turkey are deeply divided," Eskin said. "While the Barzani family leans more towards the West and towards Israel the secular Kurdish Workers' Party (PKK) was rather 'Marxist' in Western terms."

© Sputnik / Dmitry Vinogradov
'Good Cop, Bad Cop': US, Israel 'Interested in Creation of Kurdish State'
The analyst underscored that Israel has supported Iraqi Kurdistan since the early 1960s and it "will not abandon friends after 50 years of alliance."

"Israel was the first country to assist the Kurds when ISIS [Daesh] started their extermination," Eskin highlighted. "Israel always tried to develop friendship with other minority groups such as Kurds, Christians and Persians (before 1978)."

The current progress in relations with the Arabs will not alter Israel's stance toward the Kurdish struggle for independence, he noted.

'US, European Powers Not Interested in Splitting Iraq Up'

Eskin doesn't agree with those who believe that the West is interested in splitting Iraq up: According to the Israeli political analyst, the US and its European NATO allies "want to see in Iraq a balance between different religious and ethnic groups rather than any kind of partitions."

"Americans especially invested a lot of efforts and money in post-Saddam Iraq and they do not want to admit the failure of their foreign policy," Eskin explained. "Britain and France do not want to admit that their map drawing [the 1916 Sykes-Picot Agreement] for the Middle East was a gross mistake. And nobody in Washington wants to get a reminder from the Kurds that their invasion in Iraq was a total failure."

Therefore, on September 21 the UN Security Council members almost unanimously warned about "the potentially destabilizing impact" of the Kurdish referendum and "expressed their continuing respect for the sovereignty, territorial integrity and unity of Iraq."

Mutually Acceptable Compromise is the Only Way Out

However, the reality on the ground now dictates its own rules. While a military solution would obviously deal a heavy blow not only to the Middle Eastern region, but also to the geopolitical and economic interests of global players, the only way out is a mutually acceptable compromise and non-violent concessions, the analyst suggested.

Eskin emphasized "the great wave of enthusiasm among the Kurds" adding that those who predicted that the plebiscite would be used as just a bargaining chip between the KRG and Baghdad had obviously misread the situation. 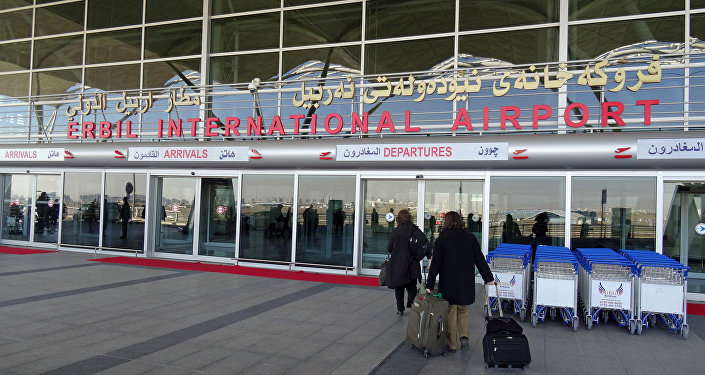 © CC BY-SA 2.0 / Jeffrey Beall / Erbil International Airport
Iraqi Kurdistan Ready to Discuss Hosting Baghdad's Observes in Local Airports
According to Eskin, "the compromise is obvious: [Iraqi] Kurdistan will not encourage the Kurds in Turkey and Iran to rebel and in exchange — no military pressure and no sanctions [will be imposed on it]."

On the other hand, however, Baghdad risks losing both oil revenues and face in case Iraqi Kurdistan secedes.

Therefore, "there is an urgent need for cooperation between Russia and the US [on the issue]," the analyst believes.

While Washington still has influence on decision-makers in Iraq, Moscow has recently emerged as a powerful negotiator and broker in the Middle Eastern region. According to the analyst, the two may potentially help solve the Baghdad-Kurdish dilemma.

Meanwhile, the Russian Foreign Ministry emphasized "the need to avoid anything that could further complicate and destabilize the already conflict-ridden Middle Eastern region," while commenting on the Kurdish independence vote.

Moscow underscored that it "maintains… unwavering commitment to the sovereignty, unity and territorial integrity of the friendly Iraq and other Middle Eastern states." On the other hand, the ministry stressed that it "respects the national aspirations of the Kurds."

It pointed out that "all disputes… between the Iraqi federal government and the government of the Kurdish Autonomous Region… should be resolved through constructive and respectful dialogue with a view to devising a mutually acceptable formula of coexistence within a single Iraqi state."