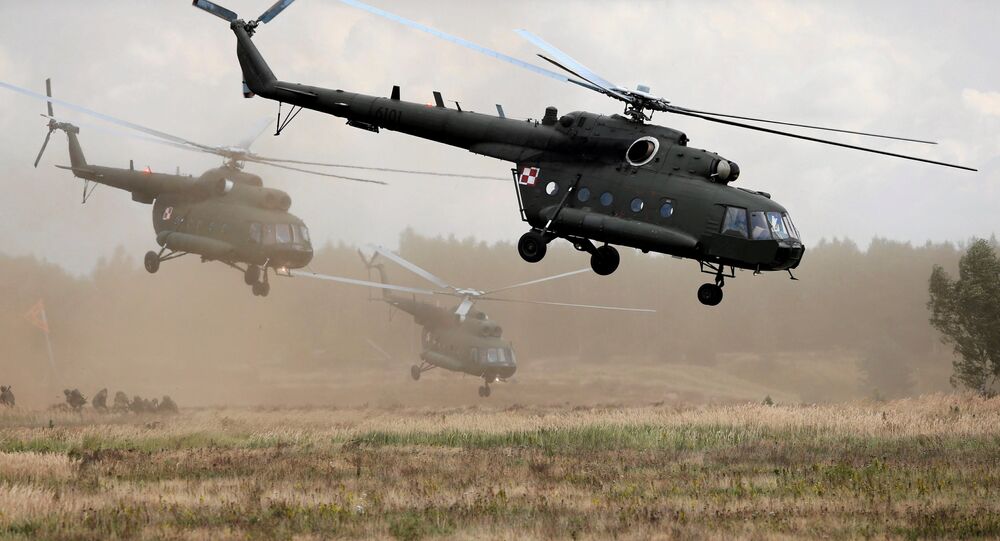 Some 17,500 troops and 3,500 vehicles kicked off five days of drilling in Poland on Monday, the exercise coming on the heels of the Russian-Belarusian Zapad-2017 drills, which Polish officials and media described as preparations for an invasion of Europe. Speaking to Sputnik, political analyst Konrad Rekas said the hypocrisy was delicious.

The NATO drills, whose active phase runs until Friday, involve troops from Poland and NATO allies the US, Lithuania, Latvia, the UK, Germany, Slovakia, Italy, Bulgaria, Romania, as well as NATO hopefuls Georgia and Ukraine. Ahead of the exercises, Polish Defense Minister Antoni Macierewicz said the drills would carry a "very aggressive" character, and involve 122,000 troops, rather than the aforementioned 17,500.

Speaking to Sputnik Polska, Polish political observer Konrad Rekas suggested that the gap between Warsaw's assessment of the Russian-Belarusian Zapad-2017 drills ('aggression', 'preparation for an invasion') and the NATO Dragon-17 exercises is nothing short of astounding.

"It's gradually becoming clear what caused the hysteria in the Polish media about the Zapad-2017 drills in Belarus," Rekas said. "Simply put, as is typical in Western propaganda, and especially that of NATO, it was necessary to justify NATO's own aggressive actions while scaring people about the alleged aggression of other countries."

© Sputnik / Stringer
DRAGON-17 Large-Scale Military Drills Start in Poland
"This is an old NATO strategy," the observer stressed, and one which the Poles should recall, since it was the same strategy Nazi Germany used on the eve of World War II. "It's worth recalling that Hitler's Germany also always justified its aggression as a defensive action. NATO acts in the same way. Each new act of aggression by the alliance is preceded by propaganda about drilling, and explanations about how its poor member countries must defend themselves against the aggression of others."

In the meantime, Rekas noted, the Dragon-17 drills are larger than the Zapad-2017 maneuvers, which involved 12,700 servicemen. Ahead of those drills, NATO politicians and media claimed that between 60,000 and 100,000 troops would be involved, and that their 'non-transparent' nature would be a threat to Europe.

"It is worth noting that those drills did not culminate in a Russian attack on Poland or Lithuania, as stated on the covers of some Polish weekly publications at the time," the observer quipped. "Zapad-2017 was treated almost like a declaration of war. Of course, these same complaisant analysts don't see the several thousand foreign troops and massive amount of NATO military equipment assembled in our country as an act of aggression," he added.

© Photo : Evgeni Meshkov/Russian Defense Ministry
Zapad-2017: Why Poland's Media Getting Hysterical Over Russia-Belarus Drills
Asked to comment on Defense Minister Macierewicz's claim that the drills would involve over 120,000 troops, and that part of the NATO contingent would remain on Polish territory after they wrapped up, Rekas said the escalation on NATO's eastern borders with Russia was all part of a propaganda war.

"All these huge masses of troops arriving in Poland are, in a sense, an element of military propaganda," he said. The reality, on the other hand, is that over the last 25 years, the Polish military has lost much of its military effectiveness, its stocks of weapons filled with decommissioned German or American systems.

"These are suitable, of course, when it comes to conducting colonial missions at America's behest, but completely useless from the point of view of Poland's strategy," Rekas said.

Finally, the observer noted that Dragon-17 is not the first large-scale drill in the region in recent weeks, with the alliance carrying out drills in the Mediterranean, Latvia, Germany, Slovenia, Romania, Bulgaria and elsewhere.

© AP Photo / Mindaugas Kulbis
‘Deterrent Capabilities’: US Military Armor Pours Into Poland
"They're doing it wherever possible, and this provokes a reaction by the Russian side," Rekas noted. It is only natural that this strategy increases the dangers of a hot war breaking out, he warned.

Ultimately, the observer stressed that what's needed is an end to the sanctions war, détente, a return to relations based on genuine mutual respect. "But instead of extinguishing this economic and political war, the 'dangerous dreamers' at the helm are dreaming of a real war…We must remember that if it ever came down to a real military conflict with Belarus or with Russia, Poland would be its first victim. Therefore, it is in our interest to do everything possible to prevent this from happening. And Warsaw must be the one to propose détente between East and West, rather than sparking the flames of war."