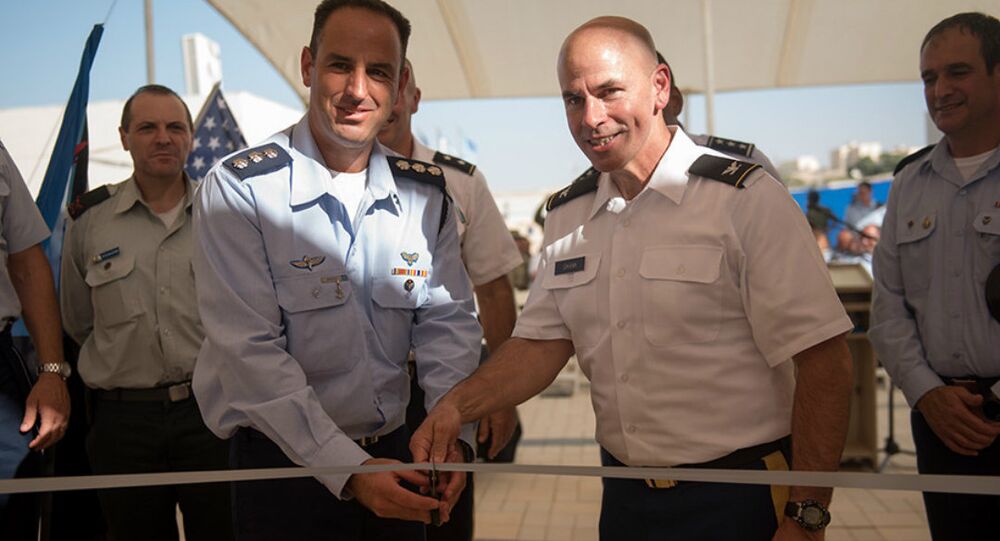 There is nothing strange about the opening of a new US military facility in Israel given the long record of collaboration between the countries' armed forces, Israeli scholar Dr. Ely Karmon told Radio Sputnik. According to Karmon, the latest development sends a signal to Tehran and Hezbollah to stop their military buildup in Syria.

If the opening of what the US dubbed a "military facility" in Israel is intended to send a signal, its major addressees are Iran and Hezbollah, Dr. Ely Karmon, a senior research scholar at the International Institute for Counter-Terrorism, told Radio Sputnik.

Earlier Israeli media outlets reported that the US had recently a new building cluster in the country, adding that it was initially called "a base" by Israeli Defense Forces officials, but then the term was scrubbed from reports and replaced with the word "facility."

Israeli Defense Forces
US Denies Reports it Opened Military Base in Israel
The reported misinterpretation had immediately prompted a debate.

According to Karmon, a mere "misunderstanding of terminology" lay at the root of the situation. The new US facility in Israel does not have "extraterritorial" status, he argued.

"It's a facility for American personnel who are working together with the Israeli military in this specific base [sic]," the Israeli scholar elaborated. "Israeli and American personnel have been cooperating on [various] issues since… the First Gulf War [1990-91] when Iraq under the Saddam Hussein regime fired 39 [Scud] missiles against Israel."

Under the Clinton administration Israel acquired advanced military equipment from the US bolstering its defensive and offensive capabilities.

Since those times the countries have boosted military cooperation: According to The Washington Post, the US has provided more than $3.3 billion over the last 10 years to support the country's defensive system, comprised of David's Sling, Arrow-2, Arrow-3 and Iron Dome.

Israeli Defense Forces
‘Nothing Less Than Historic’: US Christens First Military Base Ever in Israel
Karmon emphasized that there is nothing strange about this kind of cooperation, referring to the new installation on Israeli soil: there are dozens of American and Israeli military specialists working together to operate the country's complex multi-layer air defense system.

When asked whether the implementation of the new building cluster is a symbol of further rapprochement between Washington and Tel-Aviv, Kamron noted that under the previous administration Israel enjoyed the same level of US military support.

However, observers had witnessed a certain chill in relations between the Obama administration and Israeli Prime Minister Benjamin Netanyahu over the Iran nuclear deal. To add to the controversy the US withheld its veto power in December 2016 allowing the UN Security Council to pass a resolution demanding that Israelis stop building settlements in Palestinian territories.

The move came under heavy criticism from then President-elect Donald Trump who tweeted: "Stay strong Israel, January 20th is fast approaching!" in reference to his inauguration day.

not anymore. The beginning of the end was the horrible Iran deal, and now this (U.N.)! Stay strong Israel, January 20th is fast approaching!

Trump's tough stance toward Tehran and the Iran nuclear deal has received high praise from the Netanyahu cabinet.

"@POTUS rightly called the nuclear deal with Iran an embarrassment. I couldn't agree with him more. Iran vows to destroy my country every day," Netanyahu tweeted on September 19.

@POTUS rightly called the nuclear deal with Iran an embarrassment. I couldn’t agree with him more. Iran vows to destroy my country every day

​The US president's first ever UN speech, which contained a verbal attack against Iran, was dubbed by Netanyahu as the most "bold" and "courageous" statement he had heard ever in the UN.

Karmon echoed Netanyahu by saying that Iran poses a threat to Israel: According to the scholar, Tehran is determined to strategically "build a ground bridge between Iran, Iraq, Syria and Lebanon" and take the necessary steps to build platforms for missiles and ground forces "and, perhaps a naval base in Tartus," thus moving toward Israel's borders.

"Clearly Israel is very worried by this trend," the scholar stressed. "As long as Iran tries to establish this extraterritorial presence… the situation continues to be very tense."

On Monday, the US Air Force formally cut the ribbon on its installation in Israel at Bislach Air Base in a move Israeli Defense Forces (IDF) Brig. Gen. Zvi Haimovitch called "nothing less than historic."

"This is the first time that we have an American flag flying in an IDF base," the general said and added: "The base is here to stay."

However, shortly afterward, the Israeli Defense Forces removed all references to a US military "base" from its website. Citing an Israeli military source The Times of Israel clarified that US military representatives had contacted the IDF to ask for the change in phrasing because of an apparent legal discrepancy.

US Denies Reports it Opened Military Base in Israel