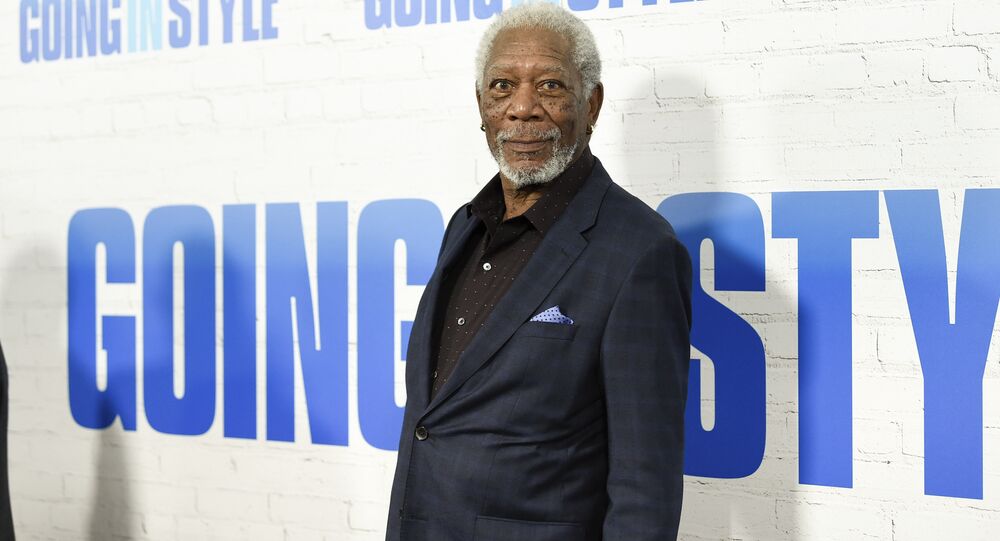 Hollywood actor Morgan Freeman has enjoyed a lucrative career playing American presidents in a variety of big budget, blockbuster movies. However his latest role as narrator of a crude anti-Russian propaganda video, produced by a group of disaffected Washington and Hollywood liberals, suggests that he has now lost the plot.

At the height of the McCarthy anti-communist witch hunts in the United States in the 1950s, Hollywood threw up its share of courageous men and women who refused to kowtow to the crude propaganda that was a ubiquitous feature of the nation's cultural values during this period — propaganda designed to demonize Russia, its people and government, as America's mortal enemy, bent on its destruction and global domination.

© AP Photo / Chris Pizzello/Invision
Driving Miss Crazy: Morgan Freeman Declares War on Russia at Rob Reiner's Behest
The witch hunts (Red Scare) also exposed its share of charlatans and snitches, people who fell into line with the fabricated anti-Russian hysteria that had been whipped up, pointing the finger at alleged traitors and miscreants in their ranks and earning themselves a cold place in history as a consequence.

The world renowned playwright Arthur Miller, who refused to cooperate with the House Un-American Activities Committee (HUAC) hearing when he appeared in front of it in 1957, based one of his most famous and critically acclaimed plays — The Crucible — on this low point in US history, using the actual witch hunts that took place in the town of Salem, Massachusetts in the 17th century as an allegory.

As Miller said of the period, "The Red hunt, led by the House Committee on Un-American Activities and by McCarthy, was becoming the dominating fixation of the American psyche," unleashing a "veritable holy terror among actors, directors, and others."

In 2017 McCarthyism is back bigger, bolder and uglier than ever — evidenced in this crude propaganda video in which Morgan Freeman makes the astonishing assertion that "we [the US] are at war with Russia," throwing up the baseless allegation, tirelessly repeated by a liberal establishment that remains in denial over the failure of Hillary Clinton to be coronated (elected) President of the United States in 2016, of Moscow's interference in the election as evidence of the fact.

Morgan Freeman was just one of the countless Hollywood celebrities that went to bat for Clinton during her campaign, narrating a campaign video that was so saccharine in its unfailing praise of her attributes and legacy in public office, that watching it, even today, brings with it the risk of contracting diabetes. On the back of Clinton's new book — What Happened — a poorly written work of self pity and self justification in which she blames everyone and everything apart from herself for her election defeat, this video and the organization behind it, the self-styled Committee to Investigate Russia, leaves no doubt that liberal America is in meltdown.

The only thing that liberal America is at war with today is the truth — the truth of its mendacity, sense of exceptionalism and entitlement. For people such as Morgan Freeman liberal values are universal values, the only ones deserving of respect and support.

They continue to torture themselves with that fact that Hillary Clinton's divine right to rule was denied by not just any political candidate, but this candidate — a man, in Donald Trump, who appeared so unqualified and unsuited to the lofty office of US president that the very idea of him getting elected would have been laughed out of the room by Hollywood executives if it had been pitched as the basis for a new reality TV show.

That Trump is a moral monster is, by this point, hard to argue with; his reckless disregard for international law and diplomacy is concerning to say the least. But let us not make the mistake of believing that Clinton and her ilk bring anything better to the table. On the contrary, Hillary Clinton's record is a monument to mendacity, proof of her attachment to the virtues of the mass incarceration of young black men at home and the virtues of cruise missile diplomacy abroad.

The Committee to Investigate Russia is the latter day equivalent of the House un-American Activities Committee (HUAC). It represents all that is egregious about a political culture that speaks the language of democracy and freedom while engaging in hysterical scaremongering in order to detract from the many and manifold problems that afflict American society.

It was these problems and accompanying revulsion of the liberal class that were responsible for Trump's election last year, nothing else. They are the kind of problems that rich celebrities such as Mr. Freeman are fortunate enough not to have to grapple with in their lives, or at least certainly not now — problems of crippling inequality, low pay, lack of healthcare, and job insecurity to which a darling of Wall Street such as Hillary Clinton has nothing to offer apart from the a series of oft-repeated cliches and platitudes.

Russia-Putin/Putin-Russia: the very words strike fear and dread into the hearts of every "freedom-loving" liberal and celebrity in the land of the free. The truth is they owe both Russia and Putin a huge debt of gratitude; for without them who and what else could they possibly blame for their own inadequacies? Indeed, without a convenient bogeyman to point their very rich fingers at, their lives would be devoid of meaning.

With this astonishingly crude video and its attempt to frighten the kids with big bad Russia, Morgan Freeman calls to mind Gore Vidal's scathing critique of US politics. To wit:

"We are permanently the United States of Amnesia. We learn nothing because we remember nothing."