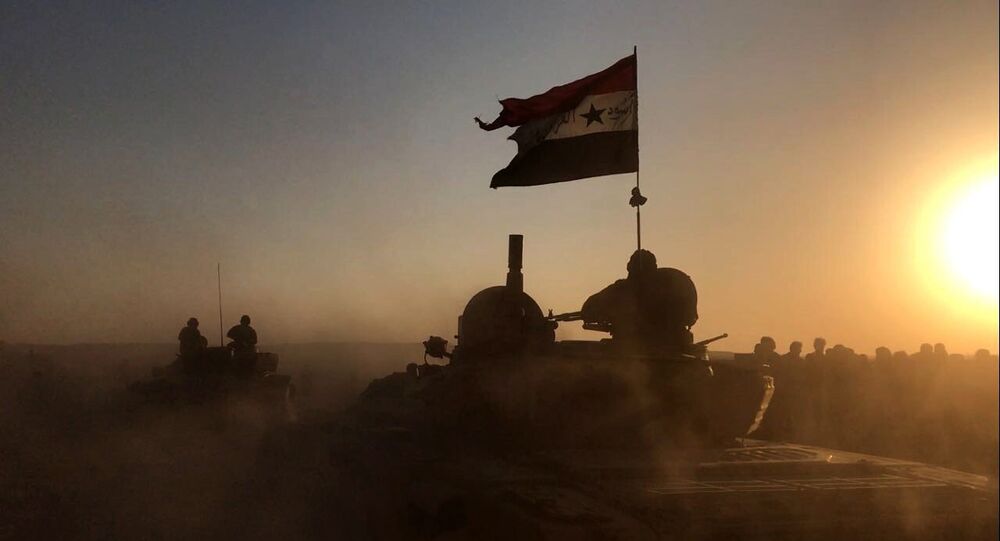 The Syrian Arab Army (SAA) has crossed the Euphrates River and is trying to restore full control over its west bank. RIA Novosti correspondent Mikhail Alaeddin was on the ground to witness a unique operation that could lead to the complete encirclement of the terrorists in Deir ez-Zor.

Mikhail Alaeddin (RIA Novosti) — Syrian government forces have conducted a forced crossing of the west bank of the Euphrates River, to ensure the security of the perimeter of Deir ez-Zor's airbase and crushing any hope of survival that Daesh (ISIS/ISIL) terrorists may still be harboring in the region.

Having achieved a series of successes in the south-east and east of Deir ez-Zor, the forward detachments of the Syrian Arab Army (SAA) closed in on the Euphrates river bank.

The river is flowing fast toward the Iraqi border. Along its shores, stories of Mesopotamia and paradise, which according to legend was located between the Tigris and the Euphrates rivers, come to mind. It really feels like a little paradise on the Euphrates at 6 am: it's cool, humid and very green, while just a 2-minute drive from here in any direction is a dusty desert.

Before launching their operation, the fighters are busy filling their canteens with water from the river, each platoon lining up, preparing for the river crossing. At night, a group of scouts managed to cross the river on small rubber dinghies, on a mission to identify the location of the main forces and firing positions of terrorists.

© Photo : Youtube/Sputnik
Syrian Army Liberates South-Eastern Deir ez-Zor Village
In the morning the heavy machinery of the Syrian government forces starts moving to the river at the command of a senior officer.

Four platoons of assault detachments are getting on floating conveyors one after the other. The fighters have to maintain a security perimeter around the pontoon crossing. The river crossing is made more complicated due the strong current. The amphibian vehicles are being carried aside like matchboxes, but still the helmsmen manage to overpower the force of nature.

In less than half an hour, the troops have hidden behind the bushes on the shore and the battle has begun.

"The terrorists obviously did not expect such a visit. We will now move the equipment. Drop the boat and the first pontoon. Hurry up, our guys need support," the Syrian general barks, and the military servicemen around him start acting quickly.

A multi-ton sophisticated engineering construction quickly unfolds to make a stable platform in the river. Ten to fifteen fighters are holding the pontoon bridge by the rope, preventing it from sailing away. The intensity of the battle on that shore is increasing, and bullets are beginning to whistle and in the area of the pontoon.

"Help, please, we need to fix the pontoon, one lock is defective, we'll have to turn it around, now we'll bring a crowbar," the officer shouts and runs toward the boat to load the next group.

The assault detachment is loaded ready for the river crossing. The soldiers are preparing their guns and spurring on the driver. "Hurry up, we need to help our people, they need ammunition," a commander of one of the groups shouts.

Having moved to the opposite side of the river the military servicemen put on distinctive ribbons, cheering each other with jokes, tighten their belts and give their equipment a final check.

An intense battle is raging one or two kilometers away from the Euphrates. On the shore we meet reconnaissance squad fighters. They are dirty but look happy. Their clothes smell of gun powder.

In the first hours of battle, Syrian soldiers manage to capture two cars loaded with terrorists along with weapons and ammunition.

"We caught them by surprise, they couldn't escape," says one of the Syrian soldiers. "But now the situation is getting worse. The enemy has realized what's happening, and is trying to counterattack on the flanks. A fierce fight is going on in the area of ​​Jafra."

In Jafra, a separate grouping of SAA troops received an order to expel terrorists from the island closer to the center of the city. However, the jihadists there were better prepared for an attack.  According to the Syrian officers' reports, the terrorists kicked off a counterattack backed by heavy mortar fire. Two of the terrorists' suicide cars exploded in the space of a couple of few hours.

"Come here. Do you want to talk? We have captured a jihadist, you can make an exclusive report for old times' sake, ask him what you want, you have five minutes," Captain Raid, with whom we have met repeatedly in different hot spots of Deir ez-Zor, shouts to me.

A bearded man lies tied-up in a car, with a bullet wound to the leg.

"My name is Mohammed, I'm from the city of Raqqa, and I've been living in Mejadin for two years [the city east of Deir ez Zor]. Please, give me water, I'm bleeding," the captured militant responds when asked to introduce himself.

"Come on, doctor, we are not animals, and we need him alive. I'm sure that Mohammed of Raqqa will tell us a lot of interesting things. Isn't that so, Mohammed?" the commander asks, holding out a bottle of water to the prisoner who nods in response.

Having drunk his fill, the jihadist provides us with interesting information. He says that after the breach of Deir-ez-Zor's blockade many of his counterparts escaped. Being afraid of being encircled, the militants transported their families to Mejadin and Bukemal at night. To date, there are no civilians left in the territory held by the terrorists in Deir ez-Zor.

"I am from Daesh, I've been in the organization for two years," the prisoner says, "I've been working in the treasury. There are many foreigners [in the terrorist organization], among them are commanders from Arab states and the Caucasus, they are fighting hard."

"Okay, time's up, he'll tell the rest to the specialists. Put him on the pontoon and drive him to the hospital first," Raid orders, and they take the prisoner away. Meanwhile, the body of a deceased Syrian soldier is being loaded onto the pontoon.

Later, we are driving toward the tank platoon headed by General Salam, an acquaintance of mine.

"You are on time, now we will begin," Salam says. "I want to share good news. We have managed to create a safe zone around the airfield. About half an hour ago the first cargo plane with ammunition landed, another one is approaching. We need to go about eight kilometers. Here, we have cleaned up almost all the territory."

© Sputnik / Mikhail Alaeddin
Why Lifting Deir ez-Zor's Blockade is 'the Beginning of the End of Syria's War'
Just a week ago, the Air Force base was encircled by terrorists. Syrian soldiers had been defending the airfield for nine months. It seemed a hopeless dream that the airport would open again, while the Syrian troops did not even dare think that the river would be crossed, just focusing on trying to keep what little they had.

Since the breach of the three-year Deir ez-Zor blockade on September 5, considerable forces of the Syrian army have begun to amass in the city. The Daesh group has also concentrated the most efficient units in this region.

Having realized that the situation is deteriorating, the terrorists began to mine entire blocks, villages, and underground tunnels inside the city, Syrian intelligence reports say.

By gaining ground near the Euphrates the SAA have managed to sever the main supply route of Daesh in the Deir ez-Zor region.

Meanwhile, fighters of the elite Syrian unit the "Tigers" are moving to the city from the west. Once the control over the west bank of the Euphrates river is restored and the fifth corpus of the Syrian Army joins the "Tigers," the ring around the jihadists hiding in the residential areas of the city will be closed unless the terrorists manage to escape before the encirclement is complete.