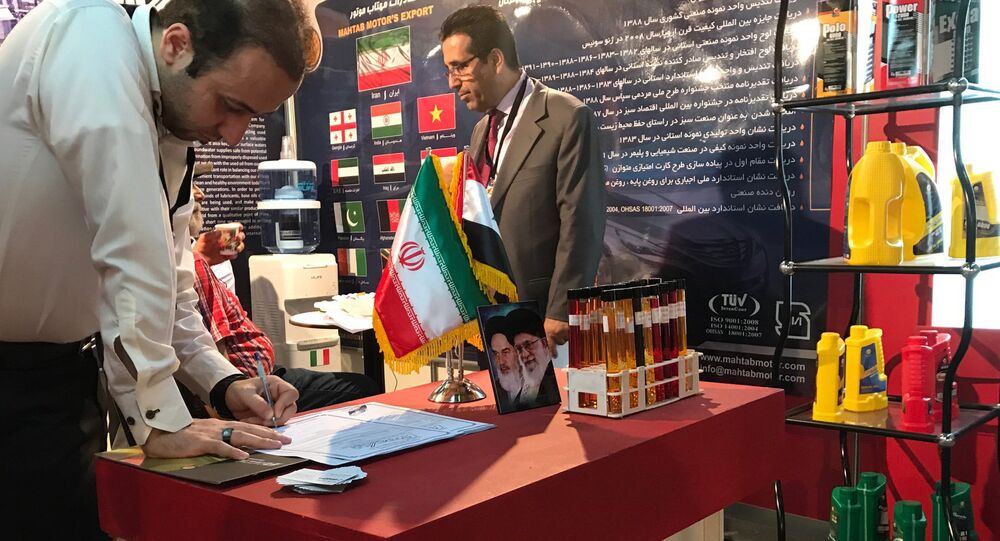 Over the past year, Iran has signed several business deals in various sectors of the Syrian economy, including telecommunications, energy, agriculture, and mining. An opinion piece titled Assad is Selling Syria to Iran, Which is Bad for the Rest of the World, was published on Haaretz, an Israeli news site, earlier this month.

The article, written by David Rosenberg, criticized the increased economic cooperation between Iran and Syria, wrongly suggesting that only Iran, particularly the commercial wing of the Iranian Revolutionary Guard Corps (IRGC), stands to gain from the agreements.

Iran's investment has been welcomed by the Syrian government, headed by President Bashar al-Assad, as it will not only directly improve the war-torn nation's infrastructure, but will also allow Syria to exploit and monetize its natural resources, including its vast phosphate reserves, providing it with an additional revenue stream to fund nationwide reconstruction.

"Tehran regards the contracts as payback for the money, men and materiel it provided that kept Assad in power when his own army couldn't. If Assad resents it, he hasn't said so in public. And there's no reason to think that he does," the article reads, suggesting that the contracts are not in Syria's interests, and have only been granted to Iran due to its support of the Syrian government throughout the ongoing crisis.

On the topic of bolstering Syria's infrastructure, Iran recently signed a memorandum of understanding (MoU) with the Arab state, outlining plans for the restoration of Syria's energy grid, and the construction of a 540-megawatt capacity power station in the Latakia governorate.

The coastal province of Latakia provides sanctuary to hundreds of thousands of internally displaced refugees, many of whom are from Aleppo, and neighbouring Idlib. The huge influx of refugees has placed strain on the electricity network; with demand far outstripping supply, electricity from the main grid is only available for a few hours per day.

The additional power station, and restoration of the electricity grid, should ease the power shortage, aiding business activity, while also improving living conditions.

As Rosenberg's article mentions, Iranians have begun purchasing land and residential properties in Syria, especially in the city of Damascus, to serve as holiday homes. Although increased Iranian interest in Syrian real estate may add inflationary pressure, local businesses, and the wider economy will benefit from tourism.

"But Iran can also act because no one else is there to compete with it. Russia doesn't have the resources and China probably has too much sense to risk involving itself in a country that's economically dead in the water," David Rosenberg claims.

The piece wrongly states that China has no interest in the Syrian economy, despite the east Asian economic superpower agreeing to spend around US$2 billion to build an industrial park in Syria, while hinting at wider investment in Syria's post-war economy. The exact meaning of David Rosenberg's comments about Russia's lack of resources is unclear.

In any case, Russian corporations have signed a number of contracts to operate in the energy sector, and negotiations for further economic and trade cooperation are ongoing.

"We already started with some of the companies after his (Russian Deputy PM Dmitry Rogozin's) visit…. the Syrian market is free now for Russian companies to come and join and to play an important part in rebuilding Syria and investing in Syria. The process of signing the contracts, the final, let's say, steps of signing the contracts is underway," President Bashar al-Assad said, highlighting Russian interest in Syria's post-war economy.

Given the fragile state of the Syrian economy, it's unsurprising that foreign firms are being drafted in to help with the extraction of natural resources, or the rebuilding of imperative infrastructure.

Although Iranian businesses may benefit from operating in the Syrian market, there's no indication that such economic activity will be to Syria's detriment. In reality, Iran (and other investors) are bolstering the Syrian economy at its most critical juncture in several decades.

It's abundantly clear that the article was written with the primary goal of discrediting any Iranian activity in Syria, as Israel views the Syrian-Iranian alliance as a threat to Zionism. If the same deals and contracts were signed with the US, or a European country, there wouldn't be such harsh criticism.

As pro-government forces continue to rapidly regain captured territory, we can expect to see more and more collaboration between Syria and its trade partners, throughout various fields of the economy.