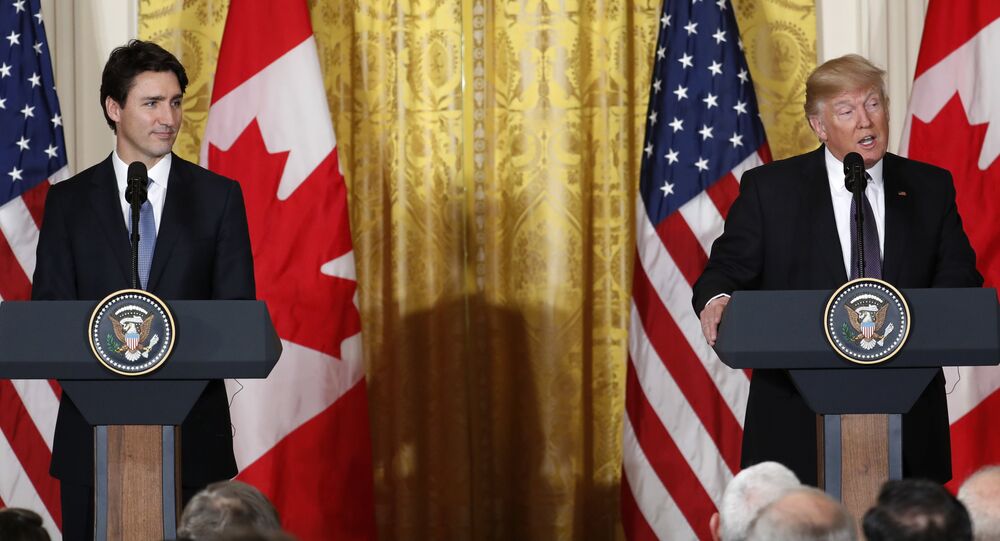 The Boeing-Bombardier Feud: 'Rich of US to Accuse Canada of Subsidizing'

The British Prime Minister Theresa May has arrived in Canada on Monday, September 18, with the row between Boeing and Bombardier on her agenda. Sputnik spoke to an expert who said the dispute could "escalate."

Boeing claims huge Canadian government subsidies allowed them to sell a new fleet of planes at substantially less than the market price.

​But David Collins, a professor of international economic law at City University of London, said the case smacked of "double standards."

"It's a bit rich of the United States to say that Canada is subsidizing Bombardier, because the US has been doing the same for Boeing for years," Professor Collins told Sputnik.

"Lots of industries are subsidized. The convention is that everybody is doing it and you just turn a blind eye to it. Now there is a worry that this could escalate," he added.

Justin Trudeau and Theresa May speak in the PM's office ahead of their private meeting #cdnpoli #ukpoli pic.twitter.com/nREbPzSinJ

Later this year, the United States International Trade Commission is due to announce whether it believes the Canadian plane manufacturer Bombardier is in breach of anti-dumping legislation.

"The maximum fine should be no more than the amount of the injury sustained by Boeing. They are not supposed to be punitive like anti-trust fines," Professor Collins told Sputnik.

But if Bombardier and Canada feel hard done by, they could they hit back at one of the many US industries which has been subsidized or it might encourage other countries to ignore the convention of "turning a blind eye" to state subsidies.

Clip of me on the BBC this morning talking about potential aircraft subsidy dispute between the US and Canada https://t.co/q5S4CYaMHv

"The research and design is so expensive, so governments can depict it as having research and innovation elements," he told Sputnik.

Professor Collins, who is himself Canadian, said Bombardier had been receiving "massive subsidies" from governments for years.

"Even when I was a boy it was happening. It's based in Quebec, which carries a lot of political clout, a bit like Northern Ireland does at the moment in Britain," he told Sputnik.

Bombardier owns several factories in Northern Ireland and recently announced 4,500 job losses, and Mrs. May will be raising the issue when she meets with Canadian Prime Minister Justin Trudeau this week.

She has already lobbied US President Donald Trump about the dispute, which stemmed from Boeing crying foul over Bombardier's sale of 75 of its CSeries mid-range jets to Delta Airlines.

Boeing claims Bombardier sold the planes for US$19 million each, despite them costing around US$33 million each to build.

It said they could only do this because they received huge subsidies from the Canadian government.

In 1989, Bombardier bought the Shorts aircraft factories in Northern Ireland and the Unite trade union, which represents workers there.

"Bombardier benefited from state investment from the UK, Canada and from Invest NI all of which was entirely lawful and legitimate — a fact that the UK government should clarify," said Davy Thompson, Unite's regional coordinator.

Next time @Boeing's president lectures another country about its aerospace industry, keep this chart in mind. https://t.co/lPECtp3MLG pic.twitter.com/3Sns1KQpbH

​"Boeing's attempts to link this public investment to the allegation of unfair competition are unsustainable, indeed, in the case of the sale of planes to Delta airlines which has been raised, Boeing did not even make a bid. Prime Minister Theresa May is reported to have had a phone conversation with President Trump on the matter but it is our understanding that the President can have no input into this decision," said Mr. Thompson.

"What is needed is for the Prime Minister to phone the head of Boeing and direct them to end their corporate bullying. The UK government is the second largest purchaser of Boeing products. These present ample leverage to end this damaging course of action," he added.