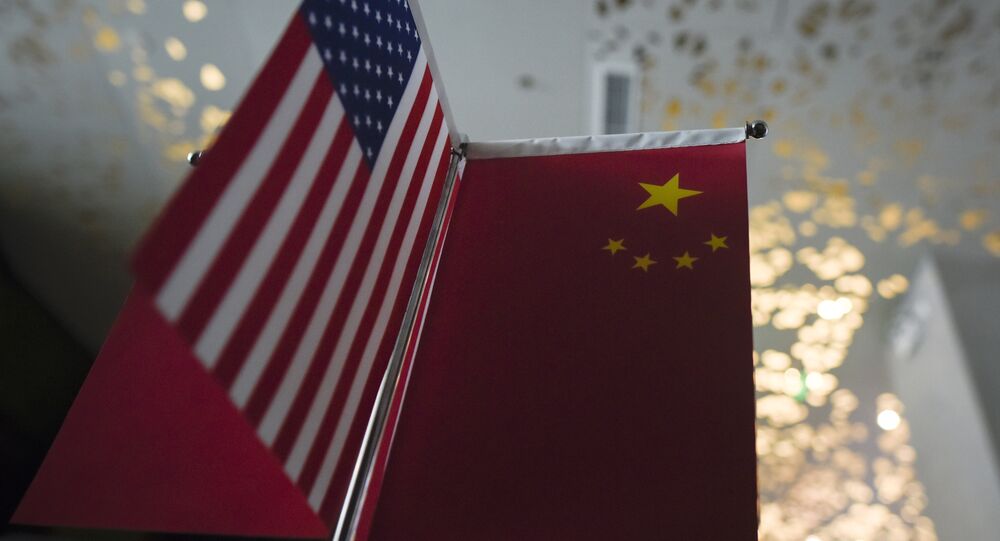 By threatening to cut off trade with China, Washington is demonstrating inflexibility and openly blackmailing Beijing in an effort to solve the North Korean problem at China's expense, experts told Sputnik, referring to the fact that Beijing has just approved a new package of UN sanctions against Pyongyang.

Treasury Secretary Steven Mnuchin's statement that the US can stop trade with any country that does business with North Korea, including China, appears to be nothing but blackmail aimed at forcing Beijing to exert more pressure on Pyongyang, Alexander Lomanov, an expert at the Institute of the Far East in Moscow, told Sputnik China.

On Wednesday, Mnuchin stated that the Trump administration may cut off trade with Beijing.

"We can stop trade with any country that does business with North Korea," the Treasury Secretary told Fox News' Bret Baier. He confirmed that "nobody would be off the table" when asked whether the administration is ready to go as far as halting trade with China.

The remark came just two days after the United Nations Security Council passed a new package of sanctions on Monday in retaliation for North Korea's nuclear test, conducted on September 3.

"This is blackmail, because America isn't waiting until these sanctions against the Democratic People's Republic of Korea (DPRK) start working," Lomanov explained. "Sanctions do not begin to work the next day after their adoption. We must look at the results at least after a few months, maybe six months, or maybe more."

North Korea's Nuke Program Won't End Until 'Equilibrium of Real Force' With US Achieved
Although Russia and China supported the recent UN measure, they urged the international community, most notably the United States, to implement a "double freeze" strategy aimed at easing tensions on the Korean Peninsula.

The expert underscored that the US has adopted an "intransigent posture," while coping with the North Korean issue. Lomanov believes that the "double freeze" initiative offered by Beijing and Moscow could create favorable conditions for the resolution of the crisis on the peninsula.

The Sino-Russian plan envisages the suspension of North Korea's missile and nuclear tests as well as joint military maneuvers by the US and its regional allies near borders of the Democratic People's Republic of Korea (DPRK).

"The Americans, however, continue to 'raise rates'," Lomanov told Sputnik. "North Korea is responding in the same manner… The DPRK has joined this race aimed at escalating the situation with great enthusiasm."

Under these conditions, "the US is openly blackmailing China, by threatening to cut off trade," because Washington wants to emerge as a winner in the US-North Korean standoff, Lomanov said.

"In the last century, [the US] did not talk to China in this tone, because they believed that nothing depends on [Beijing]. Now one shouldn't talk in this tone to China, because today a lot of things rest on [Beijing's] shoulders," the expert pointed out.

Yang Bian, an expert from the Center for International Relations Studies at the China Institute of Communications (CIC), expressed doubts that the US could suspend trade with Beijing, given the enormous scale of US-Chinese trade.

© AP Photo / Ng Han Guan, File
North Korean Nuclear Tests Cause Rockslide, Mountain Closure in Neighboring China
US goods and services trade with China totaled an estimated $648.2 billion in 2016, according to the website of the US Trade Representative, which added that exports totaled $169.3 billion and that imports were worth $478.9 billion. The value of US trade with China exceeds that of US trade with any other single country, and was worth more than the entire US defense budget for that year.

"The Treasury Secretary statement is only an attempt to exert pressure on China," Yang told Sputnik, adding that following the imposition of a new set of UN sanctions against Pyongyang, Beijing imposed tough embargo on North Korea.

Yang stressed that from the very beginning China acted as "a responsible player" in contrast to the United States, which is trying to "asphyxiate" the North Korean regime with the hands of Beijing.

According to Yang, the US has become the main obstacle to the solution of the North Korean problem: Washington hasn't made any steps to reach a compromise with Pyongyang, placing the whole burden of responsibility on China.

"This is an extremely irresponsible position, it reflects the US' helplessness," the Chinese scholar said.

© AP Photo / South Korea Defense Ministry
Majority of US Adults Back US Military Strike on N Korea if Talks Fail - Poll
Earlier, on Tuesday, Mnuchin told reporters that if China doesn't follow the United Nations' new sanctions on North Korea, the US would "put additional sanctions on them and prevent them from accessing the US and international dollar system."

The statement coincided with reports announcing Donald Trump's probable state visit to China in November, as part of his first official tour of Asia.

At the same time, observers have called attention to the fact that Mnuchin's Wednesday "warning" came amid State Councilor Yang Jiechi's visit to Washington. On September 13, Yang met at the White House with National Security Adviser H. R. McMaster and Jared Kushner, a senior advisor to the US president.

Commenting on the meeting, the South China Morning Post remarked that Yang used the Washington stopover to talk to Kushner after the latter cancelled plans to travel to Beijing. The media outlet reported that the two discussed Trump's upcoming visit to China in November, suggesting that Beijing "still regarded Kushner as a communication channel, even though its effectiveness had been reduced."

Previously, Ivanka Trump and Jared Kushner's trip to China was cancelled over reported doubts among White House officials if it was proper for the US President's family to make preparations for Trump's China visit.

To add to the tension simmering between the US and China, President Trump issued an order prohibiting the acquisition of Lattice Semiconductor Corporation (Lattice) by China's Venture Capital Fund Corporation Limited (CVCF), citing potential security risks related to such a transaction.

Trump highlighted the importance of maintaining the integrity of the semiconductor supply chain in the United States and the use of Lattice products by the US government, according to the White House's press release.

China to Share Satellite Resources with Belt and Road Countries