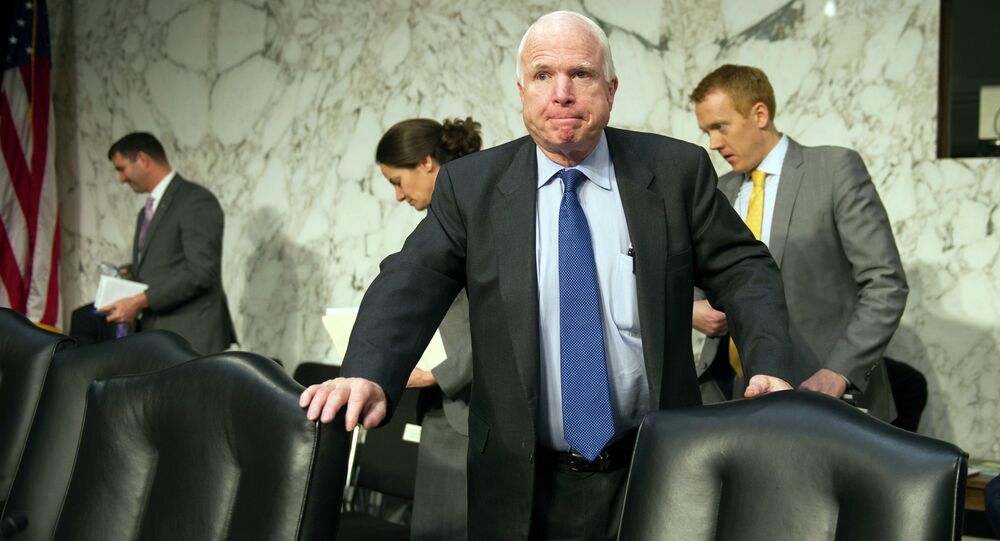 Senator John McCain's foundations and political endeavors deserve to be thoroughly scrutinized, Wall Street analyst Charles Ortel told Sputnik, sharing his views on what is behind a more than decade-long cooperation between the Arizona senator and US billionaire George Soros.

There is one thing Republican Arizona Senator John McCain and the Clintons definitely have in common — their passion for power games.

Ortel, who has been looking into the Clintons Foundation's alleged fraud for the past few years, told Sputnik that the McCain-hosted annual Sedona Forum, the Clinton Global Initiative (CGI) and other private gatherings which bring together senior foreign officials and American serving politicians "seem highly suspect" and "deserve tough scrutiny" concerning "related party transactions" that likely are created behind closed doors at such events.

The McCain Institute for International Leadership

The McCain Institute for International Leadership at Arizona State University (ASU) was founded in 2012 with $8.7 million in funds leftover from McCain's 2008 futile presidential campaign.

In the introduction video, Michael M. Crow, the ASU president explains that "in the spirit of John McCain himself and the spirit of multiple generations of the McCain family, The McCain Institute for International Leadership… is an opportunity to step out and depart from the standard think tank model," which means that they are "not sitting and talking about things" but "facilitate the making of decisions."

© AFP 2021 / SERGEI SUPINSKY
McCain: Mattis' Ukraine Visit Opportunity to Provide Lethal Assistance
The departure from "the standard think tank model" could be seen in the Institute's unwillingness to disclose the amount of donations made by its most generous foreign donors, as The Daily Caller's investigative journalist Richard Pollock found in his July report.

Pollock pointed out that the Institute's web site "only lists donors who have given '$100,000 and above,' which can be misleading," especially given Bloomberg's 2016 disclosure that the non-profit "with ties to Senator John McCain" received "a $1 million donation from the government of Saudi Arabia in 2014, according to documents filed with the US Internal Revenue Service."

The embarrassing revelation coincided with McCain seeking his sixth term in the US Senate prompting the politician to vehemently deny that he had anything to do with The McCain Institute "except that they use [his] name."

To add to the confusion, the senator rushed to cut off questions about the Saudi donation to the non-profit asked by Arizona broadcaster, KPNX Channel 12.

According to Ortel, McCain's words didn't sound convincing. It is no secret that foreign actors seeking to get along with current US  politicians sometimes donate money to non-profits somehow linked to these policymakers.

"John McCain does love his foreign adventures and does cultivate foreign government (and wealthy individual) contributions," Ortel says, "Now, if the McCain Institute were in Arkansas or Bosnia, rather than Arizona, I might find his denials potentially plausible, but two words leap to mind: 'Come on!'"

© AP Photo / Matt Dunham
Why Foreign Gov'ts Seem Reluctant to Expose Clintons' Alleged Fraud
The analyst stressed that he finds this Saudi sponsorship "deeply disturbing" especially given McCain's role in the Senate on a key committee [Committee on Armed Services]," since it amounts to a probable conflict of interest.

He also poses the question whether individuals and firms working for the McCain Institute "have appropriately registered under FARA [The Foreign Agents Registration Act], or under US state laws/regulations that require such persons to register before soliciting 'contributions.'"

FARA requires agents representing the interests of foreign powers to disclose their relationship with the foreign government and information about related activities and finances.

"There is also talk that McCain/his staff remain close with the Qataris," he remarked.

The rumor isn't surprising in light of John McCain's involvement in the Syrian crisis and his support to Saudi and Qatari-backed militants.

​In 2015 the delegation of US senators led by John McCain met with Saudi and Qatari leaders during their regional tour aimed at dealing with issues related to training Syrian rebels.

On the other hand, McCain was spotted equally enthusiastically supporting the so-called Euromaidan Revolution in Ukraine which resulted in a coup d'etat in February 2014.

"John McCain has never recently seen an intervention he did not care to support," Ortel said, expressing doubts that these activities truly correspond to America's national interests: "The US record intervening abroad, particularly since 2000 (so bi-partisan) has done a lot more harm than good to geo-political balances, has cost trillions of dollars, and resulted in great bloodshed."

However, there is yet another reason why McCain and like-minded American politicians and financiers could be interested in instigating instability abroad: these are possible vested interests, according to the Wall Street analyst.

A glaring example of such a "trouble-maker" is George Soros, a Hungarian-American investor and business magnate who has a long record of profiting from currency crises and economic instability.

"Most individuals are not investors and most investors are not familiar with how one can profit from instability and from declines in the values of securities," Ortel explained, adding that George Soros has a long career of profiting from adversity while covering himself "in the cloak of his 'charities.'"

"Soros and many others can 'short' government bonds of nations that descend into chaos and/or enter into financial contracts where, by paying a modest set of premiums, they stand to gain as values of underlying securities decline in value," the Wall Street analyst elaborated.

© AP Photo / Kevin Wolf
Soros and Hydrocarbons: What's Really Behind the Rohingya Crisis in Myanmar
According to Ortel, the practice "actually should be encouraged to regulate governments using market forces but only if such transactions are regulated and free from insider knowledge."

It is no coincidence that Soros and McCain have been repeatedly spotted endorsing US regime change operations here and there: their cooperation goes back over a decade, according to Jerome Robert Corsi, an American author and political commentator, who highlights that McCain has been "funded" by Soros since 2001.

In his 2008 article Corsi opined that in 2001, McCain founded the Reform Institute, not-for-profit think tank based in Alexandria, VA, "as a vehicle to receive funding from George Soros' Open Society Institute and Teresa Heinz Kerry's Tides Foundation and several other prominent non-profit organizations."

However, in 2006 the senator was forced to "sever his formal ties with the Reform Institute" due to a controversial $200,000 contribution from Cablevision, which was viewed as a potential conflict of interest.

Corsi believes that McCain is still being financed by Soros: "McCain lives in Soros' back pocket," the political commentator told Sputnik.

For its part, The Daily Caller in June 2017 drew attention to the fact that George Soros is among the McCain Institute's donors.

"I am not accusing McCain of trading on advance knowledge of looming instability in a particular nation or region," Ortel told Sputnik, "But I imagine there is enormous temptation for speculators to cultivate politicians to try to learn about future government actions or policies that might adversely affect exiting conditions in a particular foreign nation."