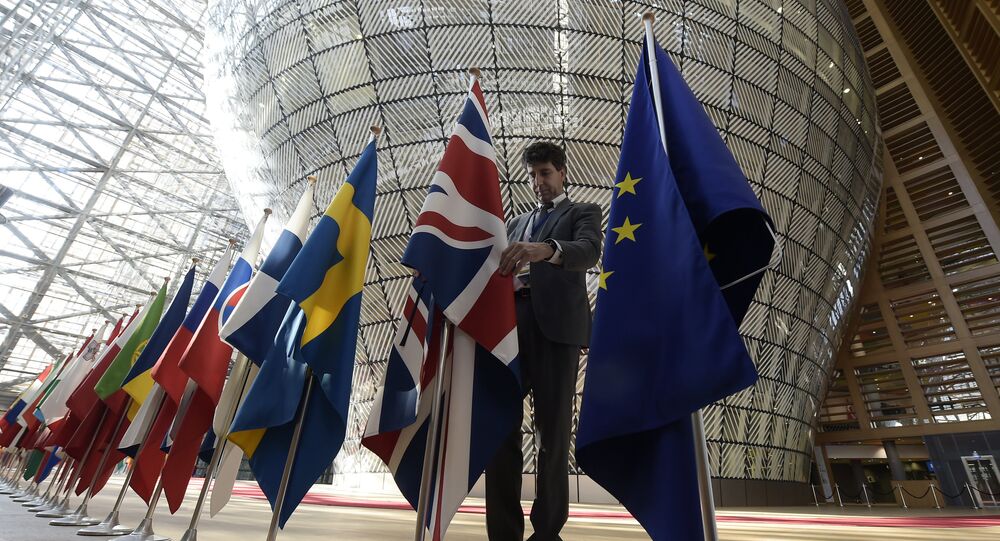 'EU Designed on Principle of Colonization of Central and Eastern Europe'

The Czech Republic could have gained more from withdrawing from the European Union rather than remaining within the bloc's ranks, Vladimira Vitova, the chairwoman of the Alliance of National Forces told Sputnik, adding that major EU powers are using Central and Eastern Europe as their 'colony.'

Right from the outset the EU was designed on a principle of inequality with Western European member states exploiting Central and Eastern Europe as their 'colony,' Vladimira Vitova, the chairwoman of the Alliance of National Forces movement, told Sputnik Czech Republic.

"From the very beginning the EU was arranged in such a way that Central and Eastern Europe only serve as a colony for the West and ensure its enrichment," Vitova told Sputnik. "Otherwise, our salaries wouldn't have been 3-4 times lower than, for example, those in Germany (and this is not related to labor productivity)."

The Alliance of National Forces, a Czech political platform, which brought together a number of minor patriotic parties, movements and organizations, is looking forward to the upcoming Czech legislative election. Those who support the movement's agenda are running for Parliament for the Czech National Social Party, one of the oldest in the country.

© REUTERS / Francois Lenoir
New Political Movement Calls for Czech Republic's Withdrawal From NATO, EU
One of the major imperatives of the movement is the withdrawal of the Czech Republic from the European Union and NATO. According to Vitova, the country will not only lose nothing from its exit from the EU and the Atlantic military bloc, but will benefit from it.

"Some of the best economists of our party confirm that after withdrawing from the EU the economy of the country will not collapse, quite the contrary — it will start to grow!" Vitova underscored.

The politician specified that judging from the publicly available data provided by the government, the membership of the Czech Republic in the EU is not profitable for the country, as the republic donates more than it receives from Brussels.

Vitova remarked that contrary to popular belief that a vast number of Czech political parties are advocating the country's exit from the European bloc, facts on the ground prove otherwise.

© Sputnik / Alexei Druzhinin
NATO to Send Experts to Massive Russia-Belarus Zapad-2017 War Games
The truth of the matter is that neither the Communist Party of Bohemia and Moravia (KSCM), nor the Civic Democratic Party, nor Freedom and Direct Democracy have clearly articulated the demand to leave the European Union in their election programs yet, she pointed out, adding that the parties are actually championing a nationwide referendum on the Czech Republic's future within the bloc.

According to Vitova, the upcoming legislative elections are far more important than referenda, since they could have provided the Czech electorate with a unique opportunity to voice their stance on the republic's EU membership.

"The same goes for the issue of leaving NATO — in regard to this the parties' programs seem to be even more vague," Vitova said, bemoaning the fact that many Czech voters do not even read the programs of the participants of the 2017 legislative election.

However, although the ruling Social Democratic Party is not calling for leaving the EU, it has repeatedly stressed that there is no need for NATO military bases in the country.

Speaking to Sputnik on August 25, the Czech ambassador to Russia, Vladimir Remek, signaled that Prague "continues to hold the view that there is no need for any military bases, including American ones."

© AP Photo / Petr David Josek
Why 'There is No Need for American Military Bases' in This European State
Most Czechs share his viewpoint: the country's opinion polls show that the people fear that the Czech Republic may fall prey to a confrontation between more powerful geopolitical players.

Vitova emphasized that although the Alliance of National Forces has no access to radio and television broadcasting, there is public demand for the movement's agenda.

The politician pointed out that according to the movement's estimates, with the participation of 7 million eligible voters, the Czech National Social Party could receive 9.07 percent of the votes and 19 seats in Parliament.

The 2017 Czech legislative election is scheduled to be held in the Czech Republic on October 20-21, with 31 Czech political parties running for Parliament. During the vote all 200 members of the Chamber of Deputies — the lower house of the bicameral Parliament of the Czech Republic — will be elected while the leader of the ruling coalition will become the country's prime minister.

A Nail in the Coffin: Merkel Considering Killing Turkey's EU Bid for Good

Hundreds of Farms in 26 EU States Affected by Fipronil Scandal