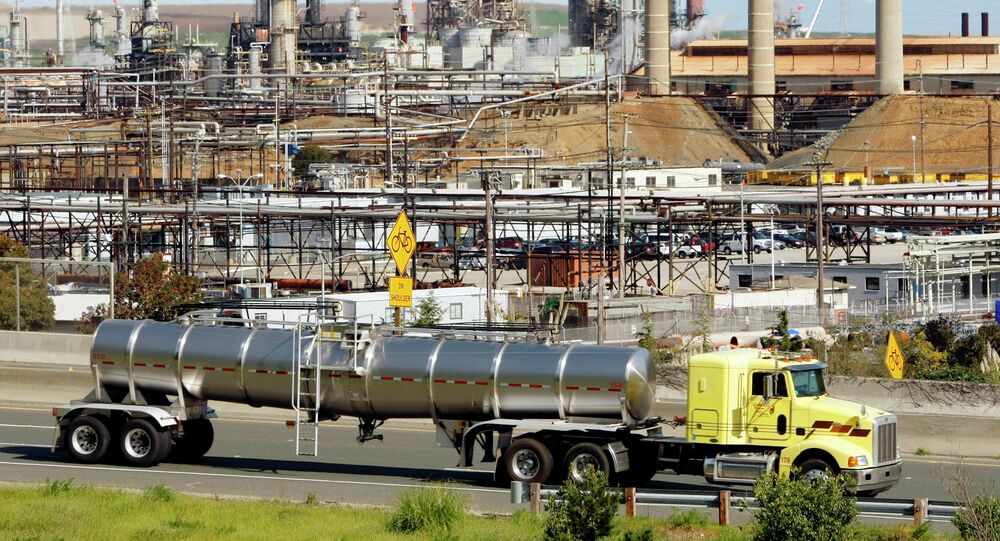 Oil refineries across the Midwest region of the United States are likely to enjoy maximum demand and increased profit margins because of the damage inflicted by Hurricane Harvey on Texas, analysts told Sputnik.

© AP Photo / Michael Dwyer
US Coast Guard Rescues Over 4,300 People in Texas Amid Harvey Flooding
WASHINGTON (Sputnik) — Floods generated by the hurricane forced the shutdown of oil refineries along the Texas Gulf Coast on Wednesday, including the Saudi-owned Motiva refinery in Port Arthur, the largest in the United States.

Roughly 25 percent or one quarter of all oil refining capacity across the United States was shut down, at least temporarily.

However, the oil refining industry in other parts of the United States would benefit from the disruptions inflicted by Harvey, Seaport Global Securities Macros Strategist Richard Hastings told Sputnik.

"There are benefits to refiners that are not damaged, and this typically refers to those in the Mid Continent of what we call PADD 2, in the Midwest. Refiners that are mostly in this region are going to benefit very much," he said.

However, the entire United States still faced the risk of supply restrictions and enduring gasoline price rises resulting from the devastation inflicted by the record-setting Hurricane, Hastings warned.

"The demand for gasoline in the US is enormous, and the risk of gasoline supply and price disturbances is beginning," he said.

The hurricane presented the US oil refining industry with a challenge it had not faced in at least 12 years, Hastings pointed out.

"Hurricane Harvey is the first major natural disaster to hit the US petroleum industry, on this scale… certainly since 2005," he said.

The Trump Administration already recognized the scale of the potential disruption and was taking what action it could to avert it, Hastings pointed out.

"The EPA today announced a waiver regarding gasoline blends, so we are already seeing how serious is the situation and that the Trump administration is apparently acting aggressively to prevent systemic damage like what occurred in 2005 after Hurricane Katrina," he said.

The US government and Congress would have to approve massive spending on infrastructure, fuel and raw material for construction to repair the widespread damage on industrial and refinery facilities the hurricane had caused, Hasting advised.

"The US is going to see a gigantic recovery operation here, with enormous demand for adhesives and asphalts, and also for diesel fuel for trucks delivering materials for reconstruction. Roads and power infrastructure will require immediate attention," he said.

The damage inflicted on the Houston region by the Hurricane Harvey would have consequences for many months on the entire US economy, Hastings warned.

"There are serious offsets here. The region is a major contribution to US GDP, and it will be partially disrupted and impaired for many, many months. In the most basic sense, some of what is lost right now is an absolute loss, and not offset by higher activity afterwards," he said.

© AFP 2020 / GREG WOOD
Pentagon Begins Surveillance Flights Over Hurricane-Affected Texas
Global Petroleum Research Institute Director of Technology David B. Burnett said the forced shut down of so many refineries had further depressed the market for crude oil, which was already suffering from over-production. But he said the damage to the refineries would be repaired

There would be in the "long term, very little effect… to the overall industry," he said.

Spot prices for crude had dropped somewhat as demand for refineries had been reduced, Burnett acknowledged. However, this was only a temporary effect," he said.

"Long term, very little effect however to the overall industry," he concluded.

At least major 15 refineries were reported going off line across Texas on Wednesday from Corpus Cristi to Port Arthur, Texas, the Department of Energy announced.

According to published estimates, roughly 25 percent or one quarter of all oil refining capacity across the United States was shut down, at least temporarily.