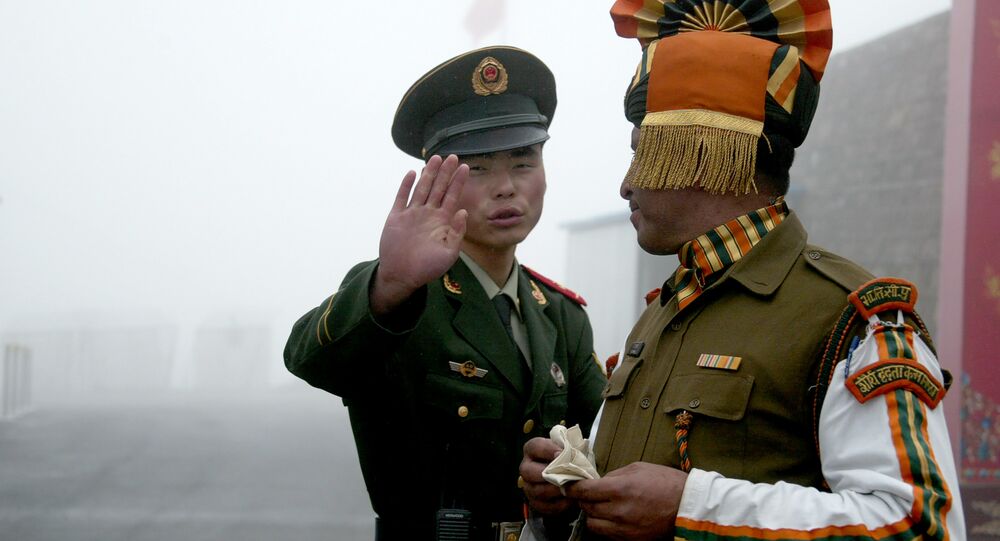 Sputnik spoke to experts from both India and China about the Doklam area border dispute between the countries, which has been recently eased as New Delhi and Beijing agreed on troops' withdrawal from the territory.

MOSCOW (Sputnik), Tommy Yang — Experts from India, China and the UK told Sputnik that while being the host of the upcoming BRICS Summit in the southern port city of Xiamen, China had to make some concessions to try to ease tenions over its the border dispute with India which in recent months in order to avoid any unintended surprise at the event.

China and India had been locked in a border standoff since mid-June. The confrontation began after Indian troops blocked Chinese road construction in the disputed area of Doklam (Donglang) near the Sikkim state, where New Delhi supports Bhutan’s territorial claims.

© AP Photo
China Hopes India to Prevent Future Border Standoffs Like Doklam
However, this week they have finally agreed on the accelerated withdrawal of troops from Doklam.

© AFP 2021 / PRAKASH SINGH
Modi to Visit China for BRICS Summit Amid Uncertainty of Doklam Pact
Amid tensions over the dispute, there had been growing concerns over whether Indian Prime Minister Narendra Modi would skip the upcoming BRICS summit in China as he did in May when Beijing hosted an international event to celebrate the One Belt One Road Initiative championed by Chinese President Xi Jinping.

However, India’s Ministry of External Affairs (MEA) said on Monday that both countries agreed to end the standoff through a "mutual disengagement" agreement. The Chinese Foreign Ministry's spokeswoman confirmed Monday that both sides managed to reach understanding on the issue.

Political analysts told Sputnik that they believe that pressure from hosting a trouble-free BRICS summit in its territories forced Beijing to make concessions that brought an end to the 10-week standoff.

"The pressure is more on China to resolve the border dispute, because they’re the host of the BRICS Summit. There is more pressure on Beijing to make sure nothing comes in the way of the summit and ensure its success. I think this [the border dispute] was the biggest roadblock," Harsh Pant, a professor of International Relations at King's College, London, and a distinguished fellow at Observer Research Foundation, told Sputnik.

The expert pointed out that the latest border dispute started when China started to build a road in the disputed area and it also ended with China suspending the road construction project.

"If the road is not being built, it’s legal enough for India to pullback, because the boundary dispute is not the problem and has been going on for ages. The real issue was China’s desire to construct a concrete road in this conjunction under dispute. If the Chinese made the concession to not build the road, the whole problem went away," Pant said.

© Sputnik / Zhanna Manukyan
India Still Committed to BRICS Amid Tensions With China – Ambassador to Russia
The Chinese Foreign Ministry's spokeswoman said on Tuesday that China would adjust its road building plans in the disputed area taking into account of various factors such as the weather.

In his turn, Prime Minister Modi would not have gone ahead with the visit to China if the border dispute remains unresolved, according to the expert.

Following the resolution of the border dispute, India’s MEA said Tuesday that Modi plans to visit Xiamen in China’s Fujian province during September 3-5, 2017 to attend the 9th BRICS Summit.

Chinese experts argued that Beijing’s decision to suspend road construction is indeed due to weather conditions in the region.

"The weather condition is still the main reason. We all know that heavy snowfall is expected in the Donglang region by late September. The snow will block off the mountain completely, making it impossible to continue road construction," Hu Zhiyong, a research fellow at the Institute of International Relations of the Shanghai Academy of Social Sciences, told Sputnik.

"This incident has allowed China to clearly understand potential threat from India. I would call India an ‘incompetent bungler.’ That’s because India always is a spoiler in all the international organizations it becomes a part of. It always takes outrageous and irrational actions. After this incident, China realized that India is not a friendly partner, but a trouble-maker," Hu claimed.

Chinese Foreign Minister Wang Yi said on Wednesday that Beijing hopes that New Delhi will remember the lessons of latest border confrontation and will avoid such incidents in the future.

Despite both China and India agreeing to deescalate the border dispute for the sake of the BRICS summit, the temporary compromise may not last long, as tensions could quickly flare again, experts argued.

"The standoff has ended without resolving the dispute over the Doklam plateau. The Indian forces have retreated 500 meters to their ridge-top post at Doka La and can quickly intervene if the Chinese People’s Liberation Army (PLA) attempts to restart work on the military road — a construction that triggered the face-off. As for China, it has withdrawn its troops and equipment from the face-off site, but strongly asserts the right to send in armed patrols. A fresh crisis could flare if the PLA tries again to build the controversial road to the Indian border," Brahma Chellaney, a professor of strategic studies at the New Delhi-based Center for Policy Research, told Sputnik.

The Chinese Defense Ministry said on Monday that China will maintain a high combat readiness level in the disputed area near the border with India and Bhutan and will decisively protect China's territorial sovereignty.