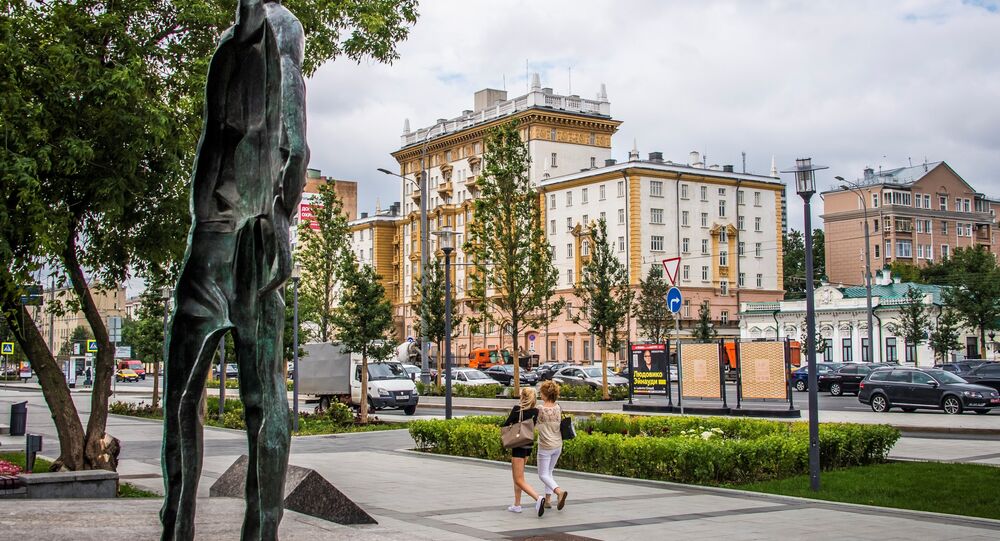 Washington's suspension of nonimmigrant visa processing for Russians is obviously a "childish" move, Earl Rasmussen of the Eurasia Center told Radio Sputnik. Per Rasmussen, the US State Department has chosen the wrong way to deal with Russia.

The suspension of US nonimmigrant visa processing throughout Russia is yet another step down a very dangerous path, which may result in Washington's alienation, Earl Rasmussen, the executive vice president of the nonprofit Eurasia Center, told Radio Sputnik.

The US Embassy in Moscow announced Monday that "all nonimmigrant visa operations across Russia will be suspended on August 23." While the operations would resume in Moscow on September 1, they will still remain suspended "indefinitely" at US consulates in other Russian cities.

"The staffing changes will also affect the scheduling of a limited number of immigrant visa applications," the US diplomatic mission highlighted, adding that those Russian citizens who had paid a visa fee before the implementation of the recent measure will not be able to either receive a refund or transfer their applications to another country.

© AFP 2021 / Mladen ANTONOV
US Embassy's Move on Russian Visas 'Evidence of Further Deterioration of Ties' - Senator
Justifying the move, the embassy referred to Moscow's requirement to cut its diplomatic staff by 755 people and added that the restrictions would remain in place for as long as staffing levels are reduced.

On July 28, the Russian Foreign Ministry suspended the use of all US Embassy warehouses and its compound in Moscow and also requested the US cut down the number of its diplomatic staff in Russia to 455 people by September 1.

Commenting on the US Embassy's move Russian Foreign Minister Sergei Lavrov said that the US decision to sharply scale back its visa services in Russia appears to be nothing but an attempt to stir up acrimony among ordinary Russians against the authorities.

Radio Sputnik got in touch with Earl Rasmussen asking him to share his views on the recent developments.

Rasmussen echoed Lavrov suggesting that the suspension of nonimmigrant visa processing could have been aimed at creating certain public pressure on Russian authorities.

The scholar condemned the US State Department's move as "childish" and expressed cautious hope that what is going on wouldn't spin out of control and lead to yet another Cold War scenario.

"I don't know whether it will stop soon…. I think it's a dangerous path and not just for US-Russian relations," Rasmussen stressed, suggesting that the US State Department could potentially try to put pressure on its allies to put obstacles in the way of Russians getting visas.

"Personally, I think that the US is going down a very dangerous path which will result in the alienation of themselves," he told Radio Sputnik.

© Sputnik / Iliya Pitalev
'Demarche': Russian Senator Vows Moscow's Response to US Embassy Suspending Issuing Nonimmigrant Visas
The further deterioration of US-Russian relations is obviously beneficial to no one, given the fact that there are many matters that are in need of joint Russo-American cooperation, the scholar noted.

Rasmussen called attention to the Ukrainian issue, the simmering North Korean crisis and most notably to the Middle East, where Russia is playing a significant role in tackling the terror threat.

As for American domestic affairs, the US space program cannot evolve without Moscow's participation, he pointed out, referring to the Russian state-of-the-art RD-180 rocket engines.

"And there are tons of other things [where US-Russian joint cooperation is needed]," the scholar emphasized citing the problems of the distribution of arms and drugs and the spread of terrorism.

"Russia is a very important partner in countering terrorism and I think that [US President Donald] Trump is getting cornered and I think he is being put in position, politically, where he really doesn't want to be in and there are a lot of 'dark forces' that are influencing the US [foreign] policy right now," Rasmussen said.

To add to the controversy the US is losing its credibility, he remarked.

"What we are truly missing and this is what I truly hope is going to emerge is a true leadership, a leadership to work with other countries, not to dominate and be the world's hegemonic power but be a true leader. And I think that the US could be that, a leader of the free world, a leader of the world in general. Unfortunately, I don't see it happening right now," Rasmussen underscored.

Meanwhile, Russian lawmakers consider the recent US' diplomatic move as a clear "demarche."

"This is, of course, a demarche," Andrei Klimov, the head of the commission on state sovereignty protection of the Russian Federation Council, told Sputnik.

"We cannot stay in debt. Everything here is obviously going to be mirrored," Klimov noted, specifying that Russia is likely to give a "mirror" response to the move by the US Embassy and consulates that are going to limit their visa operations.

US Embassy in Russia Denies It 'Deliberately Increased Visa Refusals'