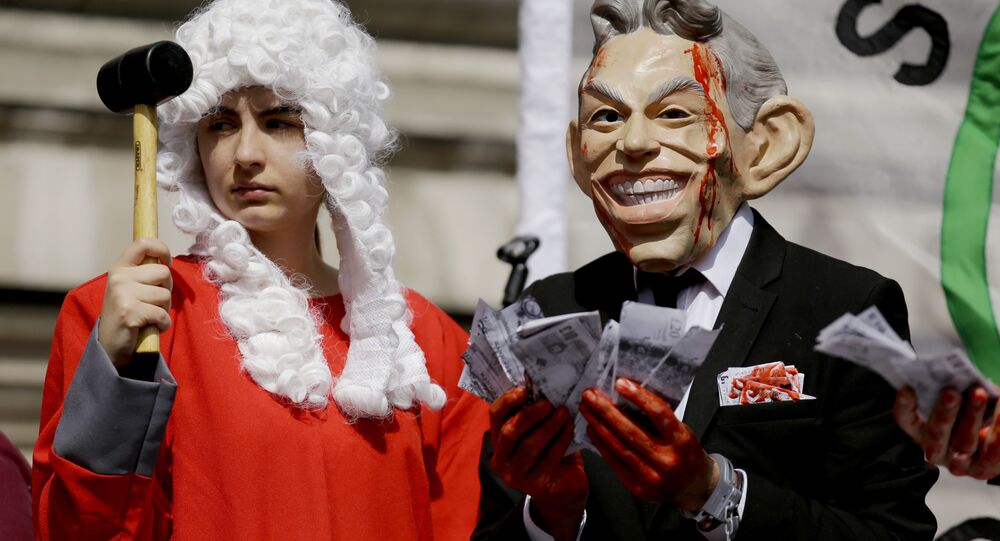 If Tony Blair can't be prosecuted for war crimes then no one can. If a man who played a key role in waging a war that was directly responsible for the deaths of up to one million people cannot be made to face justice then there is no justice - or at least not for its poor victims in a world owned and controlled by the rich.

Blair's deeds are now so well known it almost seems futile repeating them. However lest anyone make the mistake of associating them with the past, it is important to emphasize that people in Iraq, the entire Middle East, and the wider world continue live with the consequences of those deeds today.

The UK High Court's decision to block the attempt by former Iraqi Army General Abdul Wahed Shannan Al Rabbat to introduce proceedings against Blair for the crime of aggression by invading Iraq in 2003 brings the UK legal system into disrepute. In claiming that there was "no prospect of the case succeeding," the three High Court judges responsible for the decision relied on the argument that that the "crime of aggression" is not one recognized in English law.

The crime of aggression was first established at the Nuremberg Trials after the Second World War, in which leading figures and officials of Hitler's Nazi regime were prosecuted. At the time the crime of aggression was not recognized in German law, yet this did not prevent justice being served against men who were responsible for some of the most heinous crimes against humanity ever known.

Similarly, Slobodan Milosevic, former President of the Federal Republic of Yugoslavia and former President of Serbia, was arrested and stood trial in The Hague at the International Criminal Tribunal for the Former Yugoslavia (ICTY). He was charged with crimes against humanity and of violating the laws or customs of war. In his testimony in court, Milosevic said, "Our defense was a heroic defense, a heroic defense from the aggression launched by NATO."

Milosevic, it should be pointed out, was exonerated of the charges, though in a tragic denouement to the man's attempt to prevent the disintegration of his country, he did not live to see it.

Of Milosevic's trail, author John Laughland wrote: "Mere anarchy was loosed upon the world when the Cold War ended and the US sought to create a unipolar world system by destroying the old one. After the 1991 Iraq war, the US and Britain claimed the right to bomb Iraq to protect the Kurds and Shias, which they did for 12 years. NATO bombed the Bosnian Serbs in 1995 and Yugoslavia in 1999. The ICTY, created in 1993, operates on the basis of this doctrine of interventionism, which has come to its ghastly conclusion in the bloodbaths of Iraq and Afghanistan."

Laughland continued, "Created and controlled by the Great Powers, the ICTY, like its sister courts for Rwanda and the new international criminal court, corrupts the judicial process for political ends, the most important of which is to support the US's supposed right to act as the world's policeman (my emphasis)."

The key words here are "supposed right to act as the world's policeman." For it is in this precise context that the war of aggression unleashed on Iraq in 2003 by the then Bush administration and its ever-willing lackey, the Blair government in London, should be understood. It is also why we have a disjuncture between international law in doctrina (theory) and its application in praxi (practise). It is the difference between those who are not powerful enough to escape justice, and those who are deemed too powerful to meet justice.

Tony Blair is a symbol of everything that is wrong with a world in which the rights of the powerful exist at the expense of the powerless, enabling the former to slaughter and terrorize the latter with impunity. As such, what we have is not so much international law as international hypocrisy, thus plunging the so-called international community into disrepute.

The Iraq War stands as the 21st century's Vietnam War. It was an imperialist war of aggression unleashed against a country and people systematically weakened and starved over 13 years of savage economic sanctions beforehand. The war had absolutely nothing to do with WMD, little to do with removing a dictator, and everything to do with hegemony and oil. Moreover, rather than give birth to democracy, the Iraq War gave birth to Salafi-jihadi terrorism and extremism on a scale hitherto unimaginable.

People in Iraq and all over the world do not need a trial to determine Tony Blair's guilt. To them he is and will always be guilty as sin.

With the inordinate and obscene wealth he has accumulated in the years since Iraq, Blair can buy anything he wants except a clean conscience. The one he carries around is akin to a foul smelling, putrefying swamp of desolation.

Every single day it reminds him "there is no flag large enough to cover the shame of killing innocent people."