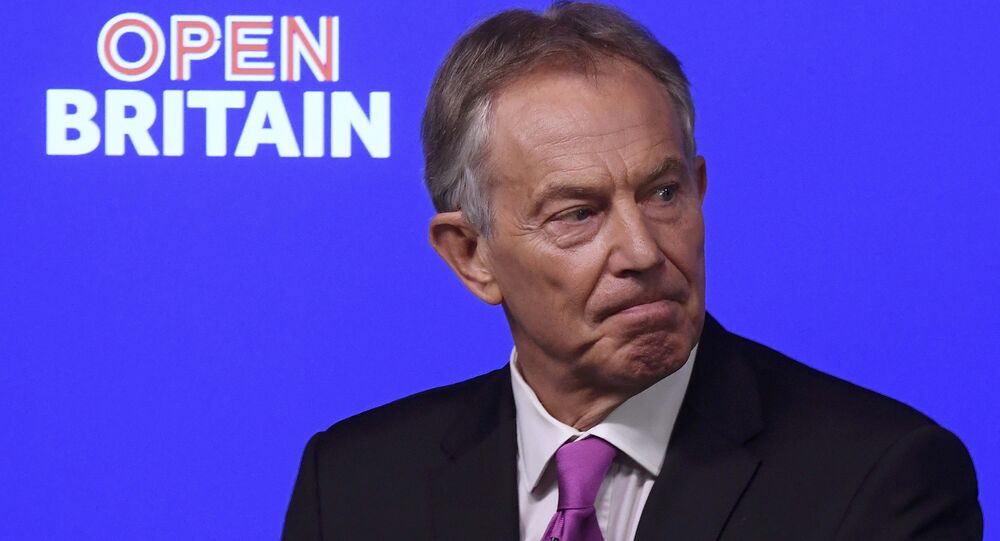 The timing of Tony Blair's latest foray into British mainstream politics, on the question of Brexit and Jeremy Corbyn's leadership of the Labour Party, could not have been any more significant or offensive.

With the US-backed Iraqi military operation to retake Mosul from Daesh having just been completed at enormous human cost, Blair's every appearance and utterance reminds us of his role in unleashing the catastrophic war on Iraq in 2003. This he did as the more than eager junior partner of the neocon fanatics of the Bush administration to produce not democracy but devastation and societal collapse, planting the malignant seeds out of which groups such as Daesh and al-Nusra later grew.

At time of writing, Blair is yet to face justice for the mayhem and carnage he was party to in Iraq, even though its consequences are still being felt not only throughout the region but across the world, what with the growing proliferation of extremism and terrorism that has ensued since. And when we consider that having just marked the anniversary of the 1995 Srebrenica massacre, adjudged to have been an act of genocide by the International Criminal Tribunal for the Former Yugoslavia (ICTY), the double standards implicit in one of the co-authors of the 2003 war of aggression against Iraq being allowed to ride off into the sunset to amass the wealth of a latter day Crassus, while Serbia's Slobodan Milosevic, who was exonerated by the ICTY of any responsibility for Srebrenica or other war crimes in Bosnia, died in prison, are truly shocking to behold.

Since the Second World War bombs dropped in the name of democracy have killed and maimed more people than any other kind. Yet in what counts as a grotesque and perverse inversion of morality we have been conditioned to accept that human slaughter and the wholesale destruction of countries — Afghanistan, Yugoslavia, Iraq, Libya — committed in the name of democracy are not war crimes or crimes against humanity, but well intentioned attempts to make the world a better place. A better place for whom exactly? Certainly not for the countless legions of dead and maimed that has been the bitter harvest of the crazed proponents of "humanitarian intervention" and regime change. And most certainly not for those societies that have been left to pick up the shattered pieces in the aftermath.

A world whose support for justice is sincerely held can no longer accept such flagrant and contemptible double standards, which is precisely why the ability of Tony Blair to continue to parade himself as a serious and credible political voice, provided with a platform in the mainstream media, is akin to spitting on the countless graves of the dead in Iraq.

With that being said, his intervention in the continuing swamp of UK politics, otherwise known as Brexit, has come at a point in proceedings where there is no longer any gainsaying the unalloyed disaster the vote on the part of the British people to leave the EU has produced.

Let us here drive a stake through the heart of the underlying myth upon which the entire premise of Brexit rests. The particular issues being grappled with by more and more people across the UK today — issues of inequality, low wages, lack of job security, the pressure on public services, and so on — are not and never have been due to Britain's membership of the EU. Instead they are a result of the maldistribution of wealth and resources that is and has been a feature of British politics for over a generation, beginning with Margaret Thatcher's arrival in Downing Street as the country's prime minister back in 1979.

Neoliberalism, free market orthodoxy, Thatcherism, call it what you will, the UK is a major ideological and economic repository of this particularly virulent and unfettered model of capitalism, which is why the notion that the erection of a border or firewall between good old Blighty and those accursed foreigners in Europe will usher in a new dawn of happiness and freedom is delusional at best.

That the EU in its current form is untenable is something that no one can seriously disagree with. Monetary union without political union has proved its undoing, producing a crude mishmash of both to the detriment of both. While the single market, customs union and close cooperation in the realms of scientific research, security, environmental protection, and other sundry matters are eminently progressive, the lack of democratic transparency and accountability, combined with a one size fits all juridical and legal framework regardless of historical, national or cultural factors, is not.

In addition, the balance between respect for national sovereignty and integration has erred too far in favor of the latter at the expense of the former, which has been exacerbated by the economic dislocation wrought by the 2007/08 global economic recession and resulting austerity to produce a dangerous rise in xenophobia, nativism, and nationalism across Europe in recent years. Of this phenomenon Brexit is its UK manifestation.

Ultimately, though, the structural weaknesses of the EU make a strong case for reform not disintegration, with Europe's history of brutal conflict, rooted in nationalism, providing a warning of the very real dangers contained in the latter destination.

Yet despite this warning, and despite the clear evidence of the sharp and, at time of writing, unending economic consequences headed the Britain's way as the process unfolds, the Brexit-or-bust brigade continue to be prisoners of a condition known as "rational irrationality." It involves the irrationality of the herd, or collective, superseding the rationality of the individual to produce bad outcomes, whether in economics, politics, or social issues in general. Friedrich Nietzsche said it best:

"Madness is rare in individuals, but in groups, parties, nations, and ages it is the norm."

Ironically, the very same "madness" fueling Brexit or bust has long fueled the worldview of liberal interventionists like Tony Blair. He is a man shorn of ethics and a man without ethics, as Albert Camus reminds us, is a "wild beast loosed up this world."