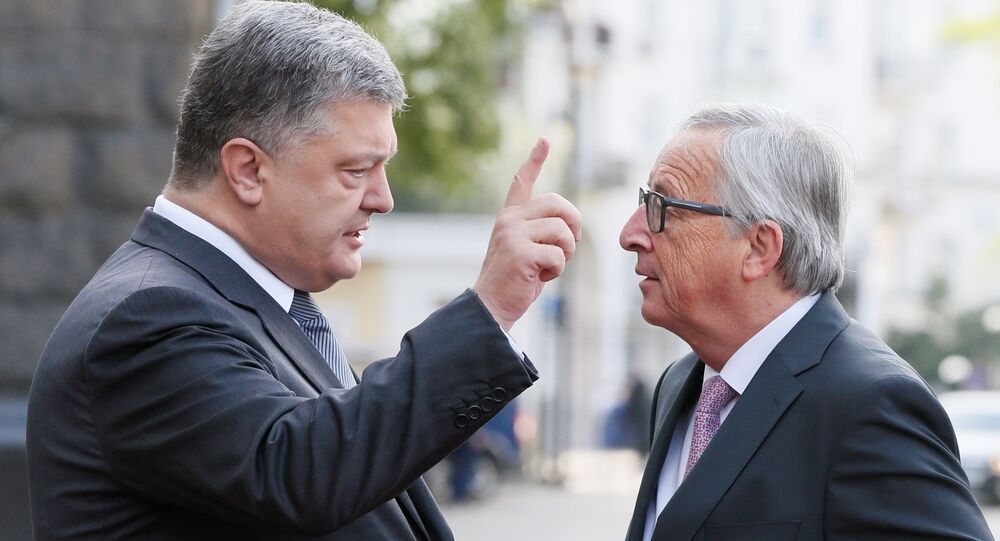 The 19th EU-Ukraine summit in Kiev summed up the results of joint work on the reforms in Ukraine and the development of bilateral relations, but failed to deliver any joint statement, traditional document for such events, in which the parties declare plans for further cooperation.

© Sputnik / Alexander Vilf
NATO's Attitude Toward Ukraine Contributes to Deadlock Over Situation in Donbas - Russian Nato Representative
KIEV (Sputnik) — The 19th EU-Ukraine summit in Kiev summed up the results of joint work on the reforms in Ukraine and the development of bilateral relations, but failed to deliver any joint statement, traditional document for such events, in which the parties declare plans for further cooperation, reportedly due to disagreements within the bloc on the vision of future relations with Ukraine, which aspires to ever become a member of the European Union.

Ukrainian President Petro Poroshenko, in the presence of EU leaders, several times stressed the country's European aspirations and proposed to draw up a "road map" for Ukraine's integration into the EU. European colleagues did not respond to this initiative. The head of the European Council Donald Tusk stressed that the main document in the relations of the two sides at this stage is an association agreement, which will enter into force on September 1.

Experts believe that this summit has become a "cold shower" for Ukraine, as it showed that Europe was moving away from serious commitments to Kiev in terms of prospects for cooperation.

EU UNSATISFIED WITH FIGHT AGAINST CORRUPTION

The summit, which was announced as a two-day event, in fact lasted about two hours. According to the presidential administration, the main topics on the agenda were the conflict in the Donbas, the implementation of reforms in the country, the European Union's support for Kiev, as well as the implementation of the association agreement with the EU.

The introductory part was short, as well as the speeches at the end of the summit. Poroshenko spoke the longest, mentioning the path that the country had to go through in three years, and the changes that had been achieved. The head of state noted that Kiev expected further support from the European Union both in its reforms and in the settlement of the crisis in Ukraine's eastern region of Donbas.

"Today we discussed the possibility of preparing a new long-term support plan for Ukraine, which was proposed at the European People's Party summit, something like the Marshall Plan for Ukraine," Poroshenko said, adding that such a plan should contribute to stabilization and economic growth in Ukraine, and the possibility of organizing an investment conference in Brussels at the beginning of 2018 would also be considered, as well as a meeting to discuss the future of the Ukrainian gas transportation system.

In their speeches, EU leaders praised Ukraine for progress in implementing reforms that allowed to introduce a visa-free regime for citizens of the country, and congratulated Kiev on completing the ratification of the association agreement with the EU. At the same time, the European Union was dissatisfied with the pace of fighting corruption in Ukraine.

"What we are concerned about is combating corruption. I do understand that the president and the parliament are doing everything possible and there is some progress to show in this regard, but the situation is not satisfactory yet, and we still need to do a lot because this is a huge and major issue," President of the European Commission Jean-Claude Juncker said after summit. He added that the EU supported the creation of an anti-corruption chamber within the existing judicial system, instead of creating a separate anti-corruption court.

Despite Poroshenko's assurances in the success of the summit, following its results, a joint statement or declaration that was traditional for such events was not adopted.

According to the Evropeiskaya Pravda media outlet, Kiev insisted that the joint statement should refer to a phrase from the EU-Ukraine Association Agreement that "the European Union acknowledges the European aspirations of Ukraine and welcomes its European choice, including its commitment to building a deep and sustainable democracy and a market economy." However, the EU categorically opposed this allegedly because of disagreements on this issue among the members of the union.

The Netherlands demanded the addition of new restrictions to the Ukraine's European dream. The Hague was supported by several other countries, and eventually the negotiations simply broke off, and the Council of the European Union at the ambassadorial level decided that the draft (statement) prepared for the summit should go to trash bin, the publication reported.

Donald Tusk avoided the answer to the question on failure to adopt a joint statement at the end of the 19th EU-Ukraine Summit.

"I said about the most important document, I mean the association agreement. It’s not a slogan. After visa normalization decision, after association agreement and the FTA this is our new reality. And I will repeat this quote, ‘European Union acknowledges the European aspirations of Ukraine and welcomes its European choice," Tusk said during the press conference in Kiev, asked if the joint statement might not be adopted because of discord in positions on Ukraine’s integration prospects.

Poroshenko added that he also considered the association agreement to be the main document in the relations between Ukraine and the EU.

"Ukraine will not make any compromises regarding its European plans, which are fixed in the agreement," the president said.

He also expressed hope that the withdrawal of the United Kingdom from the European Union would not become an obstacle to the expansion of the bloc and would not have an impact on relations between Kiev and Brussels.

In 2014, Ukraine firstly signed the political provisions, and several months later — the economic part of the Association Agreement on the free trade area with the European Union, which came into effect on January 1, 2016. The document stipulates the implementation of a series of political and economic reforms in Ukraine aimed at improving political and social institutions and eliminating corruption to gain access to the EU market. On June 11, the visa-free regime between Ukraine and the European Union entered into force, following the April 6 approval by the European Parliament.