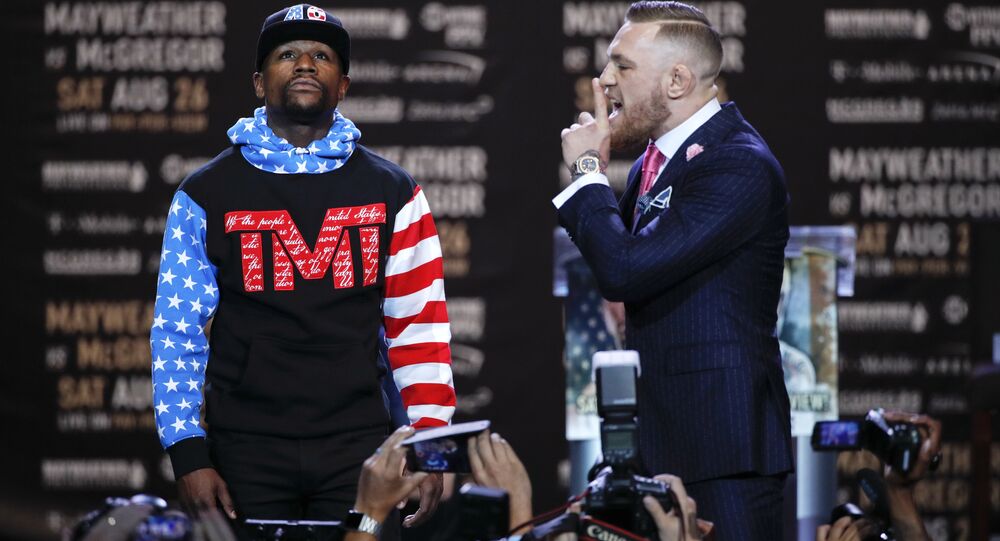 We knew it was going to be vulgar. What we did not anticipate was that it would be "this" vulgar.

The opening press conference of a scheduled four city tour to sell Mayweather vs McGregor on August 26 at the T-Mobile Arena in Las Vegas kicked off at the Staples Center in downtown Los Angeles, where 20,000 fans were whipped up into a frenzy over the spectacle of two of the highest profile athletes in their respective sports, boxing and MMA, coming together for the first time to promote their upcoming non-title bout, set to take place under Marquis of Queensberry — i.e. boxing — rules.

This is not a serious fight. It is not even an event. Instead it is a spectacle of unfettered vulgarity and greed that has little if anything to do with sport. As such, the decision of the World Boxing Council (WBC) to sanction the fight brings that organisation into disrepute.

Amid the obligatory pyrotechnics, booming Hip-Hop, and promo films of both fighters training and talking trash, Conor McGregor appeared onstage first to a blast of his by now signature ring song, The Foggy Dew.

For those who don't know, this is a song that was written to commemorate the men of the 1916 Easter Rising in Dublin — men who rose up, arms in hand, to free Ireland from British colonial rule. The Ireland they fought and died for in 1916 is most assuredly not the country represented by a multi-millionaire who flashes money and wealth around like a latter day pimp, dressed in tailor made suits with the words "f*** you" embroidered all over them, as he did at this press conference in LA.

On the contrary, it is perverse distortion of everything they represent and an indictment of the values that dominate the country a century later.

As for Mayweather, what can be said that hasn't already? In the ring, there is no arguing the sublime skill set and sheer winning mentality of one of the all time greats of the squared circle. Outside the ring, though, we're talking a man who has succeeded in making a dollar bill seem like the most disgusting thing in the world. When he isn't cavorting around shopping malls weighed down with more jewelry than Liberace, he's flaunting one of the fleet of monstrously expensive vehicles he owns, always while surrounded by an entourage of flunkies and sycophants whose every smile is bought and paid for.

At one point onstage at the Staples Center, Mayweather called over one of those flunkies, who duly arrived bearing a backpack — which no doubt cost more than what the average person in the crowd earns in a month.

Mayweather reached into the backpack and pulled out a check, which he boasted was for US$100 million, flashing it aloft while assuring the crowd he is yet to touch it he's so rich. The crowd whooped and hollered in response, intoxicated with the vicarious thrill of watching an obscenely rich man flaunt his wealth in their faces. This, to be sure, was a glimpse of the moral sickness that feeds the obsession with individual wealth and fame in the land of the free.

Meanwhile, not more than a five minute drive from the Staples Center where this circus was being held, you come to one of the largest colonies of homeless people anywhere in the Western world. They call it Skid Row and it is here where you see the other America, a society with its mask removed, one in which economic failure is treated as a crime and punished accordingly.

The expletive-laden back and forth between both fighters onstage together, the synthetic animosity, was acting of the B-movie variety. It failed to compensate for the fact that the entire thing is a joke, a charade, involving two athletes looking to cash in on their fame at the expense of anything resembling the integrity of competition or sport.

While the intimate relationship between big money and professional sport is nowadays a given, there is a line beyond which it becomes a violation of man's evolutionary development, leading us to ponder if it may not have been better if as a species we had remained in caves eating grass.

It doesn't have to be this way. When the great Cuban amateur heavyweight Teofilo Stevenson was offered millions to face Muhammad Ali in the 1970s, he turned it down, saying:

"What is a million dollars compared to the love of 8 million Cubans?"

The only chance Conor McGregor has of laying a glove on Floyd Mayweather when they meet in the ring is if Mayweather allows him to. But by then it will be too late, as professional boxing will have been dragged through the mud with its reputation tarnished - perhaps beyond repair.

The start of a great day in my storied career. pic.twitter.com/By4KPEtQwZ

Until then we will be forced to suffer the antics of two very rich and very vulgar clowns prancing around to Hip-Hop music, dressed in garish outfits spouting profanities and epithets at one another.

Like the proverbial car crash, you cannot help but watch it unfold.