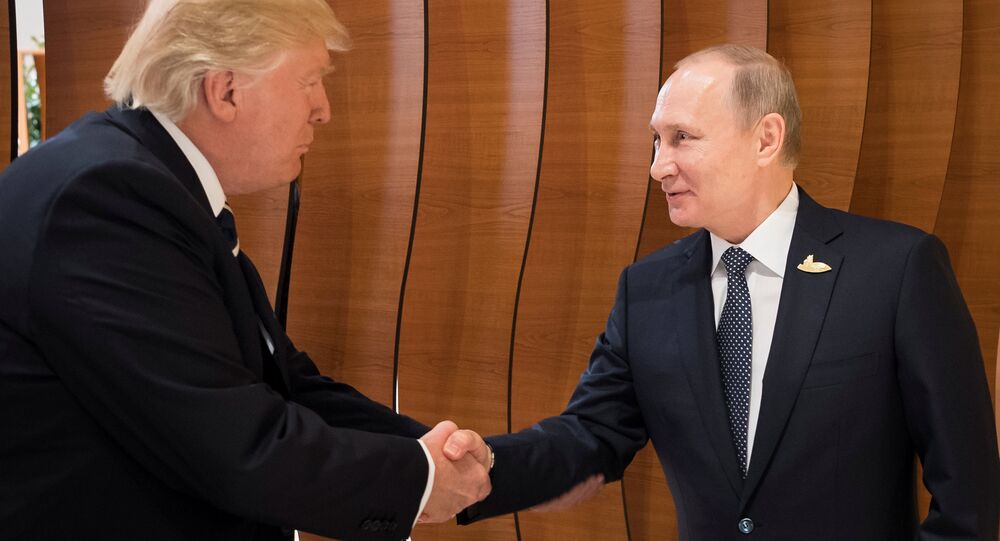 Agreements reached by US President Donald Trump and Russian President Vladimir Putin in their highly-anticipated meeting on the sidelines of the G20 summit in Hamburg could represent serious steps towards defusing tensions over Syria and Ukraine.

© REUTERS / Maxim Shemetov
Trump-Putin Meeting Important to End US Hostile Approach to Russia - Think Tank
WASHINGTON (Sputnik) — Earlier on Friday, US Secretary of State Rex Tillerson in a briefing said the first meeting between Trump and Putin revealed that a clear and positive chemistry and connection existed between the two leaders.

The meet was initially scheduled for 30 minutes, but lasted for over two hours, during which the leaders addressed some of the most pressing issues in US-Russia relations including sanctions and cyber warfare along with the conflicts in Syria and Ukraine.

Trump and Putin agreed on Friday to enforce a new ceasefire across southern Syria that will come into effect within two days at noon Damascus time on Sunday. And for the first time ever, Trump committed the United States to active involvement in implementing the Minsk Accord on Ukraine.

As for the crisis on Russia’s border, the US State Department announced that Secretary of State Rex Tillerson appointed former Permanent Representative to NATO Kurt Volker as special representative for Ukraine negotiations. Tillerson said he named Volker as a representative upon Putin’s request.

"I am encouraged. The meeting produced substantial progress on two of the most important and dangerous issues that had separated Russia and the United States during the Obama administration: Syria and Ukraine," Boyle said.

Syria especially was developing into a serious potential flashpoint between the Russian and US armed forces but Trump and Putin in their meeting on the sidelines of the G20 summit in Hamburg had both recognized the danger, Boyle pointed out.

"This was an existentially dangerous situation because at any time Russian and American military forces could have struck each other with unpredictable and catastrophic consequences," he said.

Trump’s decision to appoint veteran US diplomat and former Washington ambassador to NATO Kurt Volker as the new first US envoy to Ukraine to help implement the Minsk agreement was also a historic step forward, Boyle explained.

"For the first time ever, the United States government has bought into the Minsk accord, which is the only way forward on dealing with the situation in Ukraine," Boyle said.

Volker served as US permanent representative to NATO for presidents George W. Bush and Barack Obama. He refused to sign a 2016 open letter from scores of foreign policy experts associated with the Republican Party denouncing Trump during his successful election campaign.

"Of course the anti-Russian Factions here in the United States in the news media, the Deep State, punditry and academia will fight back ferociously," Boyle warned.

However, Trump and Putin had succeeded in laying the potential foundation for an improved relationship between the superpowers that could end the poisonous legacy of the Obama years, Boyle suggested.

"Their G20 Meeting will hopefully commence a new and constructive relationship between the US and Russia instead of the anti-Russian warmongering by Obama, Clinton, Brzezinski," he said.

Obama while president continued to use former national security adviser Zbigniew Brzezinski, known for his lifelong hostility to Russia, according to many reports.

Relations also deteriorated markedly when Hillary Clinton served as Obama’s first secretary of state from 2009 to 2013.

Historian and retired US Army Major Todd Pierce told Sputnik he welcomed the emerging reports of Trump’s talks with Putin, showing that the US president’s focus on improving ties with Moscow is paying dividends.

"If true, these headlines are very good news," he said. "Of the many reasons to complain of about Trump, avoiding war with Russia should not be one of them."

Pierce praised Trump for his repeated efforts to improve relations with Russia, often in the face of scurrilous and unproven personal allegations against him in the US media.

Trump had outraged warmongering elements in the United States, Pierce pointed out.

"Unfortunately, many of his American opponents oppose him because he has talked rationally of the need to maintain peace with Russia," he said.

Pierce also acknowledged the value of the ceasefire agreement on Syria that Trump had reached with Putin.

The US leader had agreed "to work with Russia in reducing violence in hotspots, such as Syria," he said.

However, such moves flew in the face of the long-running campaign by other groups in the United States to stir up hatred and suspicion against Russia in order to justify massively bloated arms expenditures and aggressive international policies, Pierce noted.

Trump’s attempt to reduce the danger of clashes over Syria, therefore, "goes against US militarist’s constant incitement of war with Russia that we’ve now seen for many years," he remarked.