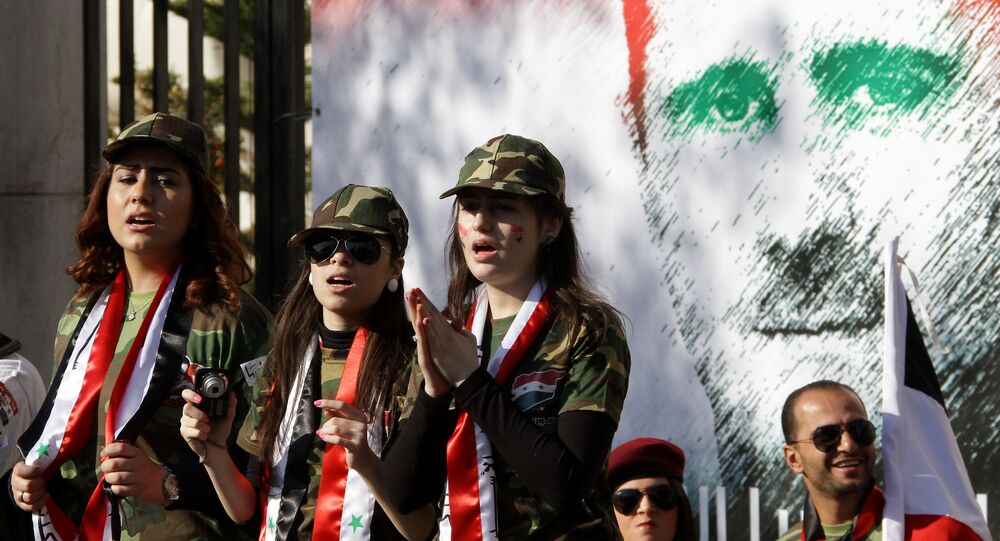 The establishment of de-escalation zones in Syria is a welcome step forward, drawing a clear line in the sand between those who are serious about fighting terrorism and those who are not, rhetoric notwithstanding.

The measure, brokered by Iran, Russia and Turkey with the support of the Syrian government, involves four opposition-held areas of the country being demarcated safe zones into which humanitarian aid will be given unfettered access, and over which no airstrikes will be conducted by Syrian or Russian aircraft.

© Sputnik / Mikhail Alaeddin
Astana Considers Recent Round of Talks to Be Major Step Toward Peace in Syria
The plan is underpinned by a six-month revolving truce between pro-government forces and those opposition forces deemed "moderate" (and Syrian), continuing the process of separating those moderate elements from Daesh and the various al-Qaeda affiliates that have been active in central, western, and northern Syria.

It is a development that emerged from the latest round of the Astana talks in Kazakhstan between the aforementioned parties. Beginning in January, the Astana talks have continued since with the objective of achieving and maintaining a cessation of hostilities between pro-government forces and so-called moderate opposition groups, and have made substantive progress in this objective over the past few months.

Success in this endeavor is crucial if a political settlement is to be achieved at the UN-brokered Geneva talks, involving, in conjunction with the governments and entities involved in the Astana talks, the US, France, Germany, Saudia Arabia, Qatar, Kuwait, and various other international governments under the auspices of the International Syria Support Group.

The challenges involved in achieving the objectives embarked upon by the introduction of de-escalation/safe zones in Syria should not be underestimated. Within opposition held territory there has been little if any demarcation between "moderates" and extremists during the course of a conflict that recently entered its seventh year. Indeed there has long been compelling evidence of close cooperation and joint-operations being conducted between both.

How could it be otherwise given the contours of a conflict between non-sectarian forces on one side, fighting for the survival of a secular, pluralist Syria, and on the other sectarian forces, whether moderate or extremist, committed to the opposite?

Be that as it may, the need to arrive at a political and diplomatic solution is self-evident. The sheer magnitude of death, destruction, and suffering that has been wrought in the course of what has been a pitiless and brutal conflict is impossible to quantify. This is is why it is in everybody's interests, and most of all the Syrian people, for the peace process to move forward, driven by three non-negotiable principles:

To identify the past few weeks of the Syrian conflict as more pregnant with the risk of escalation than it ever has been is putting it lightly.

President Trump's unilateral missile strike, launched without any UN authorization or congressional approval at the beginning of April, in response to the as yet unproven claim that the Syrian Air Force carried out an attack on civilians with chemical weapons, could well have had catastrophic consequences in the form of direct military confrontation between Russia and the United States. It came as a damning indictment of Trump's leadership, exposing him as reckless, unpredictable, and capricious as he plunged US-Russia relations to an all-time low.

The unintended consequence (though perhaps intended) was to give succour to the very extremists and terrorists that Trump had pledged to crush throughout his campaign for the White House. It also breathed new life into the dying corpse of regime change fanaticism, which for too long has been the fulcrum of US and Western foreign policy in relation to a region over which the West has long claimed ownership.

But now, with the establishment of safe zones at the behest of Syria's legitimate government and its allies, the anti-terrorism credentials of Washington and its allies are about to be tested.

© REUTERS / Ammar Abdullah
Chemical Weapons Attack on Idlib: Why Questions Need to Be Asked
Here it bears repeating: Western and Western-supported regime change is not and never has been the solution to the problems afflicting the Middle East. On the contrary, regime change is and has been the cause of those problems, delivering chaos rather than democracy, terrorism instead of human rights, and carnage rather than prosperity.

Putting the genie of extremism and fanaticism back in its bottle must be the priority of all right thinking people, not only in the Middle East but across the West, what with the increasing frequency of terrorist atrocities that have been erupting in our midst. This extremism and fanaticism encompasses both variants: the one that comes in a long beard waving the black flag of jihad, and the one that appears in a tailored suit waving the flag of democracy.

Both pose a danger to human progress, both are inimical to peace and stability, and both must be resisted at all cost.

Damascus to Abide by Russia-Backed Safe Zones, Ready to Respond to Violations