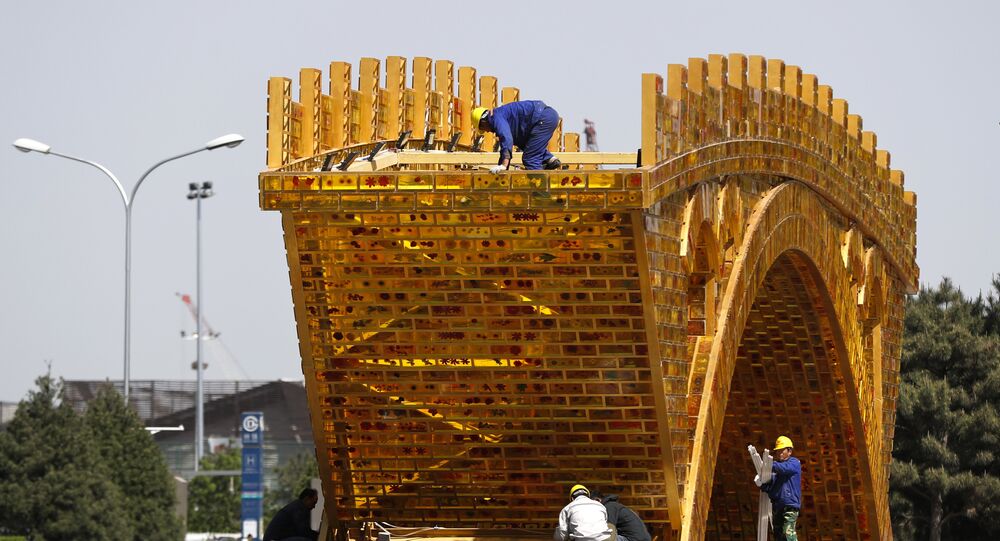 China's One Belt, One Road Strategy: Big Dream, Not a Conspiracy

There's much ado about nothing when it comes to One Belt, One Road (also known as the Belt & Road, or B&R) initiative that Chinese President Xi Jinping introduced in 2013 during a state trip to Kazakhstan.

The projects are costly and could take decades to build, but it's a win-win for companies going global on trade and investments. There will be an easier flow of transporting goods, people can move at greater convenience and less hassle to exchange foreign currencies when signing cross-border business deals.

Beijing benefits most, but deservedly so

China and Chinese companies are expected to profit most of all, since Beijing can reduce its overcapacity glut of steel, and Chinese contractors get top priority on building key infrastructure for other countries.

© AFP 2021 / MARK RALSTON
Russian Direct Investment Fund to Announce Major Deals at China's Silk Forum
But considering that Beijing is the biggest investor of the Belt & Road, they deserve the right to determine the over-all rules, so long as other countries agree to their terms. And if there's disagreement, then the project can get built in another country that would want it even more.

It makes pragmatic sense, for China to invest so heavily in global infrastructure projects and expect some a return on investment.

For example, CPEC (China-Pakistan Economic Corridor) envisions a bold plan to open up new factories, power plants and medical centers on Pakistan side of the border. Chinese companies will receive generous long-term rental fees and low to zero tax rates for the next 30 years.

Nonetheless, "Pakistan First" economic nationalists have denounced the deal as a land grab for China, but they are overlooking the simple fact that without CPEC, Pakistan has no sufficient FDI (foreign direct investments) to transform its long-dormant economic conditions for truly sustainable development in the long-term.

© REUTERS / Caren Firouz
What's CPEC, and How Does the Future of the Multipolar World Depend on It?
Hence, construction of CPEC remains stalled with unnecessary bureaucratic delays and appears unlikely to come to fruition anytime soon.

Beijing is learning a hard lesson that no good deed goes unpunished. CPEC offers a grand opportunity for Pakistani companies to succeed as they can conduct more business with China.

But Pakistani politicians, journalists and activists remain suspicious of Beijing's motives. Conspiracy theories have been swirling that the B&R will force sovereign governments to bow down to China forevermore.

Instead of seeing the economic benefits, the anti-B&R crowd has concluded it’s better for countries not to build infrastructure if the Chinese are involved, no matter how generous the terms of an agreement are.

Overcoming suspicions by enrolling in AIIB

© REUTERS / Hyungwon Kang
Zero-Sum Game: This is Why a US-Chinese 'Trade War' Under Trump Will Not Likely Happen
China's Belt & Road offers mutual benefits for all participating nations. If you need more railways lines to export rail freight abroad then give China a call. The AIIB (Asian Infrastructure Investment Bank) was set up by Beijing to serve as a finance-funding mechanism to build major infrastructure projects.

64 members states have enrolled in the AIIB, but the United States and Japan have not signed on yet. US President Donald Trump could negotiate a better trade deal by jumping on board, while Japanese Prime Minister Shinzo Abe can reduce Sino-Japan tensions with his signature as well.

President Trump has also pledged to rebuild America's infrastructure, but it would cost over $1 trillion. The AIIB can provide much-needed capital for American builders who are shovel-ready.

This month, the Chinese government will host the Belt & Road Forum, inviting government and business leaders from all over the world. Russian President Vladimir Putin is expected to attend.

The anti-China conspiracy theorists will never change their negative views on the B&R, but other governments with more neutral positions can attend the forum and discover for themselves if the Belt & Road is the right deal for them.

And when you think about it, the B&R comes down to a simple question: do you want the Chinese to build high-speed railways for your country or not?

Tom McGregor is a commentator and editor for CCTV.com news website, based in Beijing.