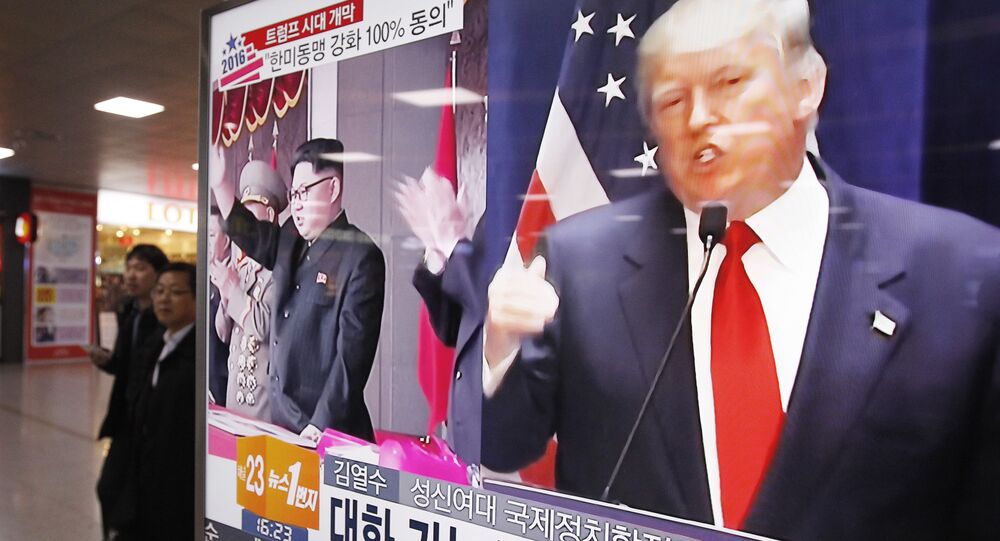 Imagine that you lead the US deep state, and you are observing the real-time flow of Western technology, industry and next-generation skills to the East with alarm. How will you reverse this trend with one master stroke and temporarily staunch the decline of Pax Americana?

© REUTERS / KCNA
What North Korea's Massive Artillery Drills Really Say About Pyongyang's Intentions
Mathew Maavak — A rapid socio-economic meltdown across Asia might produce this hypothetical outcome, and this is where the current North Korean "crisis" may provide an opening gambit.

Amidst "rising tensions" on the Korean Peninsula – while South Koreans are concerned with noodles, not nukes – the United States has pre-emptively decided what is best for the region.

But the US war machinery is vacillating for good reasons and is unable to get its narrative and geography right. On April 11, President Donald J. Trump supposedly despatched an "armada" to counter North Korean provocations, right after striking Syria. Yet the "armada" led by the USS Vinson was discovered drifting in the opposite direction in the Sunda Strait. This is nothing serious that can't be solved by hiring an American navigator who actually knows geography and game theorists with winning permutations on PlayStations.

© Sputnik
The Not So Great Armada

The US armada is back on course for a showdown in the Korean Peninsula.

Gaming out the Attack on North Korea

A pre-emptive naval strike against North Korea is the most likely option pursued if the madmen prevail in Washington. The strategic calculus here is "yuge" in its simplistic crudity: any North Korean retaliation may result in massive civilian casualties and Twitter-generated sympathies for the US-South Korea alliance.

Pyongyang has no other option. It will need to take out the Yongsan Garrison in Seoul which hosts the United States Forces Korea (USFK) headquarters, particularly the Combined Forces Command (CFC).

As Globalsecurity.org succinctly puts it: "The role of Combined Forces Command (CFC) during the armistice is to deter war. CFC's wartime role is to defeat external aggression. The CFC is commanded by a four-star US general, with a four-star ROK Army general as deputy commander. Throughout the command structure, binational manning is readily apparent: if the chief of a staff section is Korean, the deputy is American and vice versa. This integrated structure exists within the component commands as well as the headquarters. All CFC components are tactically integrated through continuous combined and joint planning, training and exercises."

Any unilateral US strike on North Korea would automatically drag South Korea as a junior partner in a war it never desired, simply because the Americans wrote all the rules of engagement since the 1953 armistice.

© Sputnik / Iliya Pitalev
All Against One: S Korea, Japan, US Agree to Tighten Pressure on N Korea
The Yongsan garrison is only a 3-minute drive away from Seoul's financial center and straddles heavily populated areas. For decades, US-scripted propaganda had invoked the specter of millions of South Korean casualties from Pyongyang's artillery range. Lost in this giddy script are the war crimes committed by US troops against the Korean people during the 1950-53 war. Was the CFC using 25 million people in the greater Seoul metropolitan area as human shields against North Korea? High civilian casualties are guaranteed in the event of a conflict as Pyongyang's projectiles lack precision-guidance.

Due to this manifest danger, the US was pressured for years to relocate the CFC to Pyeongtaek. But this will not happen before 2019 and by then, the US Army would probably be battling its own impoverished citizens back home.

Time is running out to take down Asia.

Rise of the Taeguk Warrior

Some genius in Washington may have been inspired by a redux of the orchestrated "Mi-Guk, Mi-Guk" (Mi-Guk is Korean for the United States) chants that greeted US soldiers in the 50s.

© REUTERS / U.S. Navy
North Korean Newspaper Vows Pyongyang Will Sink US Aircraft Carrier in 'Show of Force'
The modern reality is vastly different. South Korea (and Japan) is awash with anti-American undercurrents. During the 2006 World Cup in Germany, US army personnel in Yongsan were advised by their commanders to avoid passionate South Korean fans who would gather in their tens of thousands to watch giant open air live telecasts of their national team in action. There was a good precedent for this injunction: During the 2002 World Cup, a US military vehicle struck and killed two young schoolgirls in Seoul, sparking an unprecedented outburst of anti-Americanism that combined explosively with soccer-fuelled nationalism.

These are South Korea's Taeguk warriors. Imagine how they will react once even 200 South Koreans are killed in a tit-for-tat military exchange between Uncle Samael and Kim Jong-un? The lives of South Koreans naturally matter less to American uber-patriots like Senators John "I hate those Gooks" McCain and Lindsey Graham who was the "happiest dude in America" after the April 6 attack on Syria.

There is something more that may make Graham, McCain, Trump and the 130 million Americans who elected them even happier: the destruction of a thriving multi-trillion dollar Asian economy that is eclipsing the West in unprecedented ways.

© REUTERS / Dominick Reuter
Once Again, Trump Sparks Anger On Korean Peninsula, But Not Where You’d Expect
There is no way the West will countenance an ascendant Asia, and it has been probing every possible geo-economic Achilles Heel to bring the East to heel. The War on Terror now appears like a botched US-Saudi plot to control the flow of fossil fuel to an energy-dependent Asia. Yet, instead of allowing its destinies to be controlled, Asian nations launched a series of strategic fuel and grain reserve programs since the 9/11 terror attacks. Asia can no longer be held to joint US-Saudi petrol blackmail as long as Iran, Russia and Venezuela continue to pump and export oil and gas to the rest of the world. The demonization of these nations, therefore, should not come as a surprise.

From a geostrategic viewpoint, it is not the Westward contours of Middle Eastern pipelines that may have worried Washington and its hordes but rather the unfettered flow of Iranian and Russian oil to an ascendant Asia. Syria alone would have done well with untold millions levied on pipelines traversing its territory. Alternative motives behind the Arab Spring and Maidan coup should re-considered in the light of an Asian contagion that may be sparked off in the Korean peninsula.