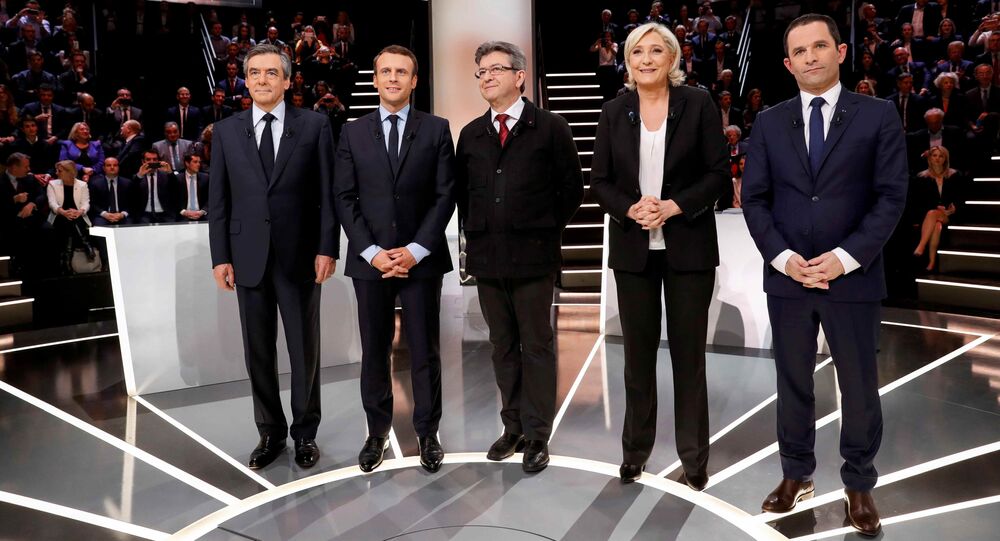 A day of pre-election silence marked Saturday in France as the presidential election campaign had concluded.

© AFP 2020 / JEAN-FRANCOIS MONIER
Withdraw From NATO, Devalue Euro: What You Need to Know About Left-Wing Presidential Hopeful Melenchon
PARIS (Sputnik) — The polling stations opened on Saturday in the French overseas collectivity of Saint Pierre and Miquelon, located off eastern Canadian shores, a day earlier than in France itself, French media reported.

The presidential election in continental France is slated for April 23, while the run-off is expected to take place on May 7.

Benoit Hamon, the candidate from the ruling Socialist Party, alongside six other presidential hopefuls, are not expected to make it through the first round of election due to the low level of support among the French people.

The main point of his pre-election campaign was France’s "national recovery."

"The state of emergency is everywhere — in economy, social sphere, financial sector, ecology, European [cooperation], as well as military sphere in the face of the Islamic totalitarianism. there is no time for half-measures any more. My project is powerful and conquering: the one aimed at national recovery. It is realistic and sincere, and it does not succumb to the demagoguery and illusions," Fillon said in his policy project.

Fillon vows to make France an independent country in terms of diplomacy, which has a balanced approach to the international agenda. He has pointed out that France should enhance, first of all, cooperation and dialogue with such countries as the United States, China and Russia.

© AFP 2020 / Christophe Archambault
French Presidential Hopeful Fillon Vows to Never Again Comment on 'Penelopegate' Scandal
Fillon was initially seen as likely to make it to the second round of the presidential elections, but the scandal around his wife's employment, the so-called Penelopegate, has seemingly hurt his chances, even though by the end of the pre-election campaign he managed to retain leading positions.

In January, the Canard Enchaine weekly was the first to report that Fillon's wife Penelope allegedly did not work as a parliamentary assistant to her husband, a job she was nevertheless paid for. The ensuing scandal led to an investigation into the circumstances of her employment. Mediapart also chipped in with its own allegations of Fillon's misuse of public funds.

The aftermath of "Penelopegate" had a positive impact on the chances of Fillon’s competitors, Le Pen and Macron, with their level of support significantly increasing after the scandal broke out.

Le Pen is projected to be the front-runner in the first round of the presidential election.

© AFP 2020 / Thomas SAMSON
Where is the Love? Trump Praises Le Pen, But She’s 'Saddened' by His Bombs
The far-right presidential candidate has vowed to start talks with the European Union’s partners on France's membership, or otherwise to hold a referendum on the country's withdrawal from the union. Le Pen has promised to resign in case the French nationals vote against France’s exit from the bloc.

Le Pen, who is also a member of the European Parliament, has also vowed to withdraw France from the Schengen zone and reinstate border controls, to deport all the foreigners on a radicalism watch list, to revoke French citizenship of the dual national citizens convicted of jihadist links. She has also promised to lower income taxes, reduce the minimum retirement age from 62 to 60, as well as to hold a number of referendums on the proportional representation, reducing numbers of deputies and senators.

"In the two first months of my presidency I will immediately take 10 necessary measures to verify democracy and respond to the pressing problems in the field of economy, social sphere and security that our country faces… Every second of my presidency will be useful to France and the French," Le Pen said.

Over the last weeks, the FN party leader has been in tight competition for public support with Macron.

© Sputnik / Irina Kalashnikova
French Presidential Hopeful Macron Pledges: I Can Manage to Get Putin's Respect
Macron, unlike Le Pen and Fillon, was not widely known to the public and the media were initially skeptical about his chances to win the presidential election. However, Macron’s level of support has significantly increased by the end of pre-election period.

In contrast to Le Pen, the independent candidate has repeatedly stressed his commitment to the pro-European policy.

Macron has pointed out that "living in fear means living without feeling free," which is why he made maintaining national security a cornerstone of his campaign. The independent candidate said that he intended to hire an additional 10,000 police officers and give them more authority. Macron has also stated his plans to increase the defense budget to 2 percent of France's GDP.

© Sputnik /
'Hand of the Kremlin'? Out of 11 French Presidential Candidates, 7 'Pro-Putin'
Left-wing presidential hopeful Melenchon, who initially had a low level of public support, has enjoyed a surge in popularity and voting intention figures during recent weeks and has a rather ambitious presidential policy, which includes plans to rewrite the constitution, devalue the euro and withdraw France from NATO.

"Our collective intelligence can overcome all the difficulties if we put all efforts into the common good. We must assume our responsibilities not only for ourselves but also for the universal humanity. I am ready for this. You are ready for this, I know it," Melenchon said in his program.

Protection of national economy is one of Melenchon's priorities. He believes that "Europe from the dreams of our ancestors is dead," while the European Union is nothing more than a common market where people are subject to the dictate of financial institutions. Melenchon has called for France's withdrawal from all European treaties which stipulate austerity policies, as well as the elimination of state action and public investments.

© Sputnik / Irina Kalashnikova
Macron Urges French Voters Not to 'Give In to Fear' After Paris Shooting, Vote for Him
The French presidential election may be targeted by terrorists, French counterterror experts told Sputnik in the wake of the Paris Thursday shooting, when a gunman opened fire on police officers in the center of Paris, killing one police officer and wounding two other police officers as well as a passer-by. Daesh terror group reportedly claimed responsibility for the attack.

The French government said on Friday that the country's security forces were fully mobilized, with 50,000 police officers and 7,000 army personnel being dispersed in order to ensure citizens' safety, ahead of the first round of the presidential election this weekend.

Macron was the first to comment on the matter, urging the French nation not to give in to fear when they go to the polls this Sunday and promised to protect them if he is elected.

"The president’s main job … is to protect the French. I am ready for it … This Sunday you will be choosing your future. Don’t give in to fear, divisions and intimidation," Macron said.

© REUTERS / Charles Platiau
Knife-Wielding Man Detained at Train Station in Paris Day Before Election
Speaking about the terrorist threat, Macron said that it would unfortunately "be a part of the everyday life of the French people in the near future." At the same time, the candidate expressed his readiness to tackle terrorism in France and abroad, including in Syria. The politician also welcomed the US anti-Daesh campaign and promised that he would, if elected, join Washington in airstrikes on Syrian government infrastructure allegedly used to stock chemical weapons.

When voicing her opinion on the attack, Le Pen said that the French authorities had not done enough to protect the country's citizens.

"Our law enforcement agencies do not wait for our compassion. They need means for protection, for struggle with the huge threat posed by the Islamic terrorism. I do not want to get accustomed to this threat. I do not want to tell our young people that they would live in conditions of daily and long term danger. We should implement a plan against the Islamic terrorism," Le Pen said.

Fillon said that counterterrorism would be the issue of high priority for the country's next president and called for a broad international coalition against terrorism.

"A broad international coalition is needed to destroy all totalitarian movements that stand at the origins of violence," Fillon said, referring to such terrorist groups as  Daesh, Boko Haram and Taliban, outlawed in many countries, including Russia.

The attack on police officers in Paris may boost the chances of Fillon and Le Pen in the election as they advocate tougher security and anti-terrorism cooperation, Nicolas Dhuicq told Sputnik.

"I think it can give an impetus to Fillon and Le Pen, because this symbolic attack brings up terrorism and security issues to the forefront. It may boost support for more realistic candidates and by that I mean candidates which are not saying that we should open our arms to everyone," Dhuicq, who is a member of The Republicans party, said.