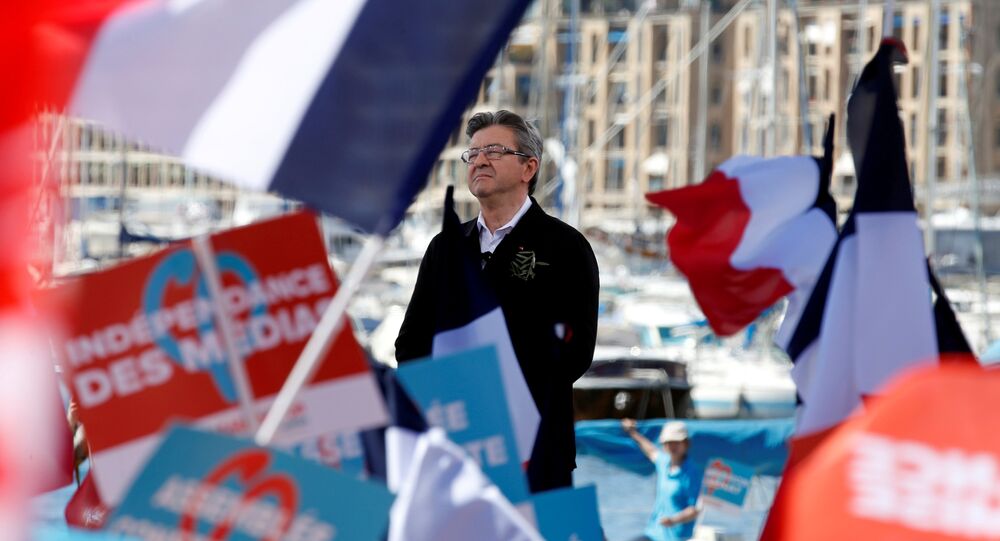 The battle over the potential third place in the first round of French presidential election between far-left Jean-Luc Melenchon and center-right Francois Fillon has recently overshadowed the contest between the front runners, centrist Emmanuel Macron and far-right Marine Le Pen, as Melenchon's popularity has unexpectedly surged in the polls.

MOSCOW (Sputnik) — According to an Ifop-Fiducial survey, Melenchon was polling at 9 percent in the beginning of February, while the Thursday poll him at 19 percent of potential votes in the first round. The Opinionway poll released on February 6 suggested that Melenchon might secure 11 percent of the votes in the first round, while the Friday poll showed that he might have 17 percent.

© Sputnik / Irina Kalashnikova
Macron Wants to Implement Vital Economic Reforms in France Amid Scandals
Melenchon's political career started back in 1976, when he joined the French Socialist Party at the age of 25. Before rising through ranks in the party and becoming a junior minister in the French Ministry of Education from 2000 to 2002, Melenchon, who moved to France from Morroco at the age of 11, had studied philosophy and worked as a journalist.

Melenchon ran for president in 2012, finishing in the fourth place in the first round, with 11.1 percent, behind Francois Hollande, who went on to win the run-off, Nicolas Sarkozy and Le Pen. In 2016, Melenchon founded the La France Insoumise (Unsubmissive France) movement.

The 65-year-old France's Communist-backed politician has often been called French Chavez by the media. Melenchon likely welcomes the comparison to late Venezuelan leader, whose life and work he called in 2013 "an everlasting ideal of the humanist hope and revolution."

Melenchon advocates the retirement at 60 at earliest, while at the moment the threshold is 62, promotes the increase of the minimum wages and of taxes for the extremely wealthy.

In terms of external affairs, Melenchon proposes either a joint renegotiation of all European treaties by all interested EU member states or the unilateral withdrawal of France from the European Union. The French should be able to support or reject the government's plans for European integration at a referendum, Melenchon said.

The far-left candidate extols the virtues of protectionism that would help protect the French economy against multinational corporations.

"The free circulation of capital and goods in the European Union and the whole world give all the power to the financial sector rather than the manufacturers, to multinational corporations rather than small and medium businesses, and to shareholders rather than employees," Melenchon's program reads.

© REUTERS / Patrick Kovarik
Macron, Le Pen Running Neck-And-Neck in 1st Round of French Presidential Elections - Poll
On April 7, the Odoxa polling firm said that, with a 3-percent margin of error for its survey, both Fillon and Melenchon could have between 15 and 21 percent of the potential votes, while the two favorites, Le Pen and Macron, might get somewhere between 26 and 20 percent. Therefore, it was possible, although extremely unlikely, as the press release stressed, that either Fillon or Melenchon could yet make it to the second round. According to that poll, Melenchon was expected to get 18 percent of the potential votes in the first round, while Fillon could hope for 18.5 percent.

"If you take into account a margin of error of the opinion polls around candidates’ scores, you can see that four main candidates have common zone of around 20 points. It means that there is a reasonable probability that Melenchon could be in the second round," Thomas Guenole, a political scientist and lecturer at the prestigious Sciences Po University in Paris, told Sputnik.

Philippe Moreau-Chevrolet, the president of MCBG Conseil, specializing in communication consulting and leadership strategy, in turn, told Sputnik that polls cannot be trusted at the moment, given that all four candidates have a relatively similar standing.

Both experts agree that a significant percentage of French voters have not decided for whom they are going to cast their ballots.

"A total of 38 percent of the French voters have not made up their mind yet, which is a record number. We also fear that 32 percent of the electorate could abstain on Election Day. That would be up 13 points from the last presidential election, in 2012. France is, electorally speaking, in a state of shock," Moreau-Chevrolet noted.

The Ifop poll on Thursday showed that 31 percent of the voters might abstain from casting their ballots in the first round.

© AFP 2021 / JEAN-FRANCOIS MONIER
Melenchon Refuses to Move in to Elysee Palace if Elected French President
Both Ifop and Opinionway polls indicate that the steady rise of Melenchon began after the first debates among the top five presidential candidates broadcast on March 20.

"Melenchon is a very gifted speaker, a very articulate politician with a deep knowledge of the history of the Left, and he stands well above the others in those respects," Jean-Yves Camus, a researcher with the think-tank IRIS and an expert on the far right in France, told Sputnik.

According to Camus, the fact that Melenchon has been in opposition to Hollande since 2012 has only strengthened his position.

"He left the Socialist Party long ago because of its ideological drift towards liberal policies. So, he is seen as a consistent politician," Camus noted.

Unlike another independent candidate Macron, who also started his political career among the Socialists, and resigned from his ministerial post only in August 2016, Melenchon broke with the party back in 2008 due to "irreconcilable ideological differences."

According to the Elabe poll done for the BFMTV broadcaster, the far-left politician was found the most convincing by 25 percent of the audience of the second debates, held on April 4, this time among all 11 candidates. Melenchon came ahead of one of the poll favorites Macron and his 21 percent and Fillon with his 15 percent.

The experts have also suggested that Melenchon rose in the polls at the expense of the Socialist Party's nominee, Benoit Hamon.

"Melenchon is strong also because Benoit Hamon does not really succeed in his campaign and lacks charisma. Besides, Hamon is too left-wing for the Social-Liberals and the moderate Social-Democrats, and he is not leftist enough for the radical left," Camus, who is also an author of the book "Far-Right Politics in Europe."

Guenole, in turn, called it the "Batman and Robin" effect explaining that "next to Melenchon, Hamon looks like a little boy, who does not really succeed in anything."

Adroit Use of New Media

"Melenchon is the only one who made a massively innovative campaign on social network and really knows his ways to shape his meetings in the modern, cozy, clear, methodological and lyrical way. His campaign is the best among all the candidates," Guenole said.

Melenchon's campaign has used holograms, which allowed him to appear at two rallies simultaneously.

On March 30, the candidate announced the release of the Fiscal Kombat video game. In the game, a pixelated Melenchon is walking across the city and stumbling upon famous French politicians and business people, including former French Minister of Economy and Finance Jerome Cahuzac sentenced to three years in prison over tax fraud, International Monetary Fund Managing Director Christine Lagarde, former French President Nicolas Sarkozy, Fillon and Macron. The character resembling Melenchon is supposed to shake money out of his opponents in order to finance his presidential campaign's promises.

Melenchon's program can be found on his website not only in traditional text format but also in the form of comic strips.

© AP Photo / Thomas Samson, Pool
Macron, Hamon Should Quit Race After Backing US Syria Strikes - Gaullist Candidate Office
Melenchon’s rise in the popularity does not surprise Guenole, who believes that his success is fully in line with the prevailing trend of new anti-globalist left parties emerging across the world following the disappointment with the center-left establishment, which has bet on the free movement of people and global free trade.

"Ideologically, the reason why Melenchon reaches so high is linked to the fact that the usual left-wing dominant party chose a very strong pro-globalization economic policy. As a result, it faces now the internal crisis and the rise of the left anti-establishment and anti-globalist movement. Two scenarios are possible in this situation: either a new leader, who is alter-globalization, like Jeremy Corbyn in the United Kingdom, appears to safe the traditional left or the party loses the election to a new anti-establishment left party. Last scenario is true for almost entire South America or Greece and now it is happening in France," Guenole explained.

According to Guenole, there were two possible ways the situation could develop: either through the emergence of a new anti-globalist leader in an established party or the victory of a new anti-establishment party. The expert said that the latter variant was seen in the case of Greece, most of South America, and might happen in France as well.

The first round of the French presidential election is scheduled for April 23, while the run-off between the top two contenders will take place on May 7. A total of 11 candidates will take part in the presidential race, according to the French Constitutional Council's president.