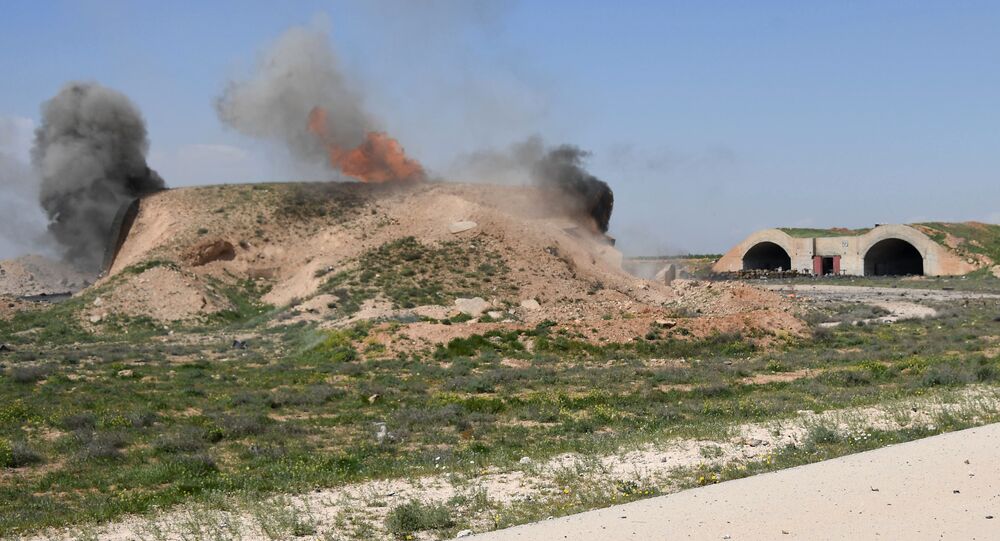 The recent bombing of a Syrian airbase by American Tomahawk missiles was preceded by several days of heavy media coverage centered on the presumed "chemical attack" against the Khan Sheikhun community.

Greg Simons — In fact, this press coverage was the only justification for the bombing, since the Organization for the Prohibition of Chemical Weapons (OPCW) and other international bodies simply had no time to properly investigate the circumstances.

© AP Photo / Alex Brandon
US Attack in Syria Proves US is 'the Most Unpredictable State in World', Result of 'Wars of Elites' - Moscow

This situation imposes additional responsibility on journalists, but were they up to the task? Unfortunately, just like in many previous cases, there were many immediate assumptions and immediate categorical statements that have been made concerning the presumed guilty party. The current situation is a vivid demonstration of the dilapidated state of the so-called fourth estate that is mixing, without any distinction, information and opinion in the news of this event.

If the hype and opinion are removed from the equation, what are the solid facts that are known about this really cruel act? The attack occurred on April 4, 2017 in the Khan Shaykhun area in the south of the Idlib province of Syria. This fact was recorded by OPCW and reflected in its press release.

For the Western mainstream media (MSM), at this point, the facts ended and allegations started. What is worse, these allegations bore all the hallmarks of propaganda. The MSM quickly assigned guilt and in many cases suggested a military course of action. In retrospective, the press coverage looks like a hasty justification for the US government's position on the matter, which resulted in the bombing.

Here is the press statement of the US secretary of state, Rex Tillerson, issued immediately after the attack in Khan Shaykhun: "While we continue to monitor the terrible situation, it is clear that this is how Bashar al-Assad operates: with brutal unabashed barbarism. Those who defend or support him, including Russia and Iran, should have no illusions… Anyone who uses chemical weapons to attack his own people shows a fundamental disregard for human decency and must be held accountable."

The first and the most frequently used technique of propaganda is assertion. It consists of presenting a disputed sequence of events or a debatable idea as a fact, with no further explanation. It reflects the public's longing for a quick and easy explanation of events. Even Tillerson's statement contains a lot of categorical and emotionally laden assertions, but offers very little in terms of hard evidence to back those claims. The guilt is also personalized (another typical element of propaganda), with Assad proclaimed guilty without any sort of trial or investigation.

Unfortunately, the MSM follow this tactic of distributing guilt by assertion. The MSM also adds to it guilt by association — a propaganda technique, in which previous misdeeds of some (possibly very different) actors are somehow associated with the demonized person. The scale of the blame is deliberately exaggerated or left unclear.

The MSM did not busy itself with any sort of balanced contextual understanding, what was being projected and promoted was the notion of a massive scale crime immediately associated with Assad.  A New York Times headline read "Worst Chemical Attack in Years in Syria; US Blames Assad".

© REUTERS / Ammar Abdullah
What US Officials Fail to Mention When Blaming Assad for Idlib Chemical Attack
This headline is deceptive and misleading as it can be deduced that this is the worst single act in six years of the Syrian civil war, even though a bigger attack took place just recently — in 2013, near Damascus. Many other attacks, some of them possibly coming from the opposition groups fighting Mr. Assad, were also recorded since then. The authors have not seen the scene of the attack, but they rush to dramatize what they have not seen: "One of the worst chemical bombings in Syria turned a northern rebel-held area into a toxic kill zone on Tuesday, inciting international outrage over the ever-increasing government impunity shown in the country's six-year war."

This one sentence contains a number of different elements of propaganda. One of them is bandwagoning — in this case the entire international community's reaction is represented as aligning itself with the US' position, without the authors specifying the positions of individual countries. In addition, the implication is that the Syrian government must abide by the NYT's representation of what the international opinion and reaction is. Assertion propaganda also appears, where there is little to no evidence provided to support the assertion (in this case concerning the ever-increasing impunity and the assigned guilt of Mr. Assad in person). The headline and the very end of the article also differ in terms of the strength of the assigned guilt. The headline contained "US blames Assad" (certainty is projected), but the last paragraph notes that "a chemical weapons attack, if carried out by the government…" denotes much less certainty of the guilty party.

Fox News, while representing a different, "illiberal" wing of the American MSM, is involved in the same kind of propaganda as the New York Times. The simplest technique is exaggeration. Here is the headline: "At Least 100 Dead in a Suspected Chemical Attack in Syria, Hospital Reportedly Hit".

Very soon we shall read that even by the most pessimistic accounts there were less than 90 victims, and not "at least 100" offered to us by Fox News. But Fox News never apologized or corrected itself. In the article they present a slideshow with "heartbreaking images of gas attack victims." This particular statement contradicts the headline that points to "a suspected chemical attack" and not a definite one. As to the "hospital reportedly hit", once again there is no certainty or due diligence concerning the verification of information, which should be a standard journalistic good practice. Fox's sources of information include the MSM standard source, the Syrian Observatory for Human Rights, which is a shadowy organization that has been actively campaigning for regime change in Syria. In addition to this source, they use the White Helmets, which are in fact a Western-funded organization that is called by some as "al-Qaeda's civil defense."

© AFP 2021 / LOUAI BESHARA
US State Senator Says 'Zero Probability' Assad Government Launched Gas Attack
The last, but certainly not the least effective means of propaganda is an emotional attack on the audience. The reader (or the viewer) is put face to face with such unbearable cruelty, that it spurs him to justify any military action (in this case — from the US government) that would remove the terrible descriptions from a newspaper page or the unbearable images from the screen before his eyes.

A headline appearing in Vox certainly is among the most emotionally-based ones — "Bashar al-Assad Just Gassed His Own People, Then Bombed the Clinic Treating Victims"

This article also uses a personalized form of character assassination against Assad, lacking any proof to back up the claims, and hypes the level and scale of the alleged atrocities committed. The information that is published in the article is not even verified, as it is admitted on the first page. Once more a great deal of stress is placed on the deaths of children. As with Reuters, some quotes by Syrian government and Russian sources are published, but hidden in the middle of the article. The end of the article confirms the conspiracy theory of the Syrian government's guilt in this matter, using selective historical accounts to try and create the picture of a pattern (as opposed to an isolated incident) of atrocities by the ‘bad' character of this story.

All in all, these practices of the MSM media should be remembered and in due time used against it. Not only politicians justifying war should be held to account, if we are allowed to use MSM's favorite formula. Journalism once more found itself in the situation of not only supporting war, but enabling it, war journalism at its very worst and supporting a narrow set of destructive political interests that are very far from the public interest of starting yet another war of choice.