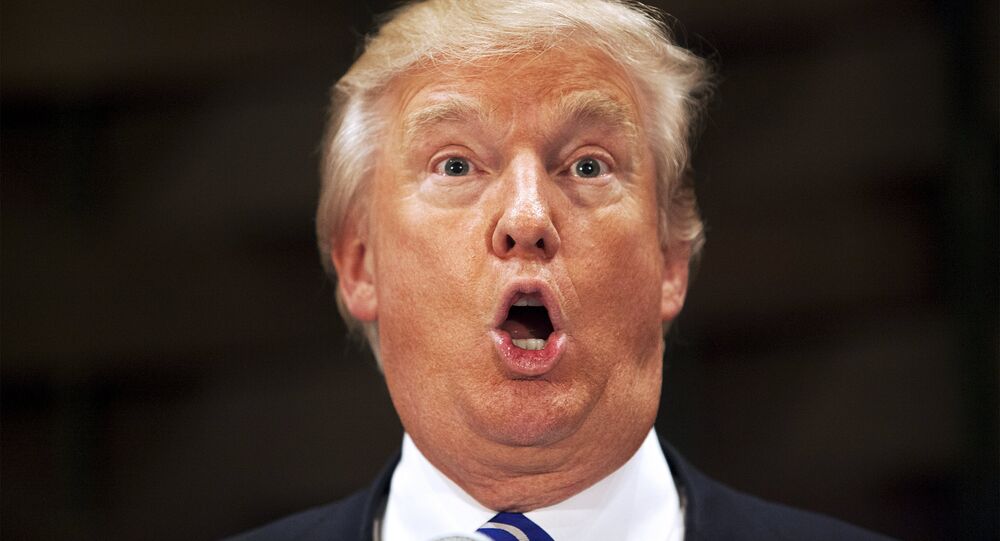 Winter is coming to an end, and America’s snow-flaked social justice delirium will finally thaw from its relative hibernation. Spring is the time for nature to reset the cycle of life and conversely for the West, to unleash its repressed atavism.

Spring has historically been associated with riots, revolutions and military offensives and therefore one should expect more political skulduggery and bedlam in Western cities, particularly in the United States.

© REUTERS / Carlos Barria
Fake News Outlets Like CNN, New York Times ‘Danger to Our Country’ - Trump
All the fake news, Russian insinuations, pussy hat marches and troll templates have been strategically pre-positioned. Even former President Barack Obama has set up a command centre in the disproportionately white Kalorama neighborhood in Washington DC in order to lead a promised rebellion of oppressed minorities against his duly-elected successor.  Ironically, Ivanka Trump will be his neighbour. Did anyone expect the Obamas to reside among Blacks and Latin Americans who together make up 60% of Washington DC’s population?

The mutineers may not want a full-scale offensive yet; not with Dow Jones breaching the historic 21,000 mark after Trump’s recent speech before the US Congress.  Is Obama willing to take down the Democrat party and the US economy down with him? His psyche profile and past actions says “yes” but his compatriots – with lots to lose – may plead “not yet” and bide their time. George Soros may still need time to recoup $1 billion by hedging on the "Trump bump".

The swamp therefore will likely resort to sustained attritional  disruption,  waiting for the day when an integrated  Maidan-style “people’s revolution” can be unleashed in concert with the first major pricks in the financial, asset and assorted bubbles.

© AP Photo / Kin Cheung
Enough is Enough: European Governments Move Against Soros NGOs
Unless Soros can arrange a unanimous Wall Street consensus to short the markets, the prospect of full-scale anarchy remains relative slim in the coming weeks. The poor man’s revolution, with very rare exceptions, is always financed by the rich. The US war of independence and its civil war a century later are two classic examples.

The “Trump bump”, in the meantime, is providing the US president with sufficient leeway to start draining the swamp, beginning with the State Department. Big Media can also be bypassed through an open sourced variation of Trump TV but that is an option yet to be exercised.

Draining the US Military-Intelligence swamp however is another matter. No one knows how many trillions in slush funds the shadow government had racked up over the years.  Here is a recapitulation of three notably official admissions:

If the saner half of the world is allowed to presume that the Russians did not hack into the US government cookie jar, then where did the money go?  Those unaccounted trillions can fund several US armies for the remainder of the Trump presidency; or fund trolls, fake news and agitprop specialists over the next 100 years.  One can imagine Marx and Trotsky drooling in their graves over this Golconda of permanent revolution.

© REUTERS / Chris Keane
Draining the Swamp, Mr Trump? Try a Toxic Ocean of Privatized Intelligence!
Draining the swamp from a largely privatized US intelligence community is therefore next to impossible over the next four years.  The US intelligence community increasingly resembles a multinational corporation with foreign stakeholders. The Saudis alone have a greater say in how US foreign policy and wars are waged than the current President of the United States himself. Just ask Hillary Clinton or John McCain! In fact, there is a time-tested joke that this writer crafted long back: “Mess around with the Saudis and Riyadh will retaliate down to the last American!”

Is that really far from the truth? With trillions stashed away for its global mercenary enterprise, members of the US intelligence community will not sign away their lucrative retirement nests.  There is no shortage of delirious “social justice warriors” either to help maintain status quo under any visceral pretext or perceived slight.

Many alarmists therefore have given the Trump administration only weeks to drain the swamp or be forced into retirement or face impeachment. That sounds rather melodramatic. If Dow Jones can keep going as “mad as a March hare” or at least hover around the 20,000 barrier, then there is no reason why the White House cannot weather whatever is thrown at it.

© AFP 2021 / Sandy Huffaker
Trump's New Travel Order 'Competent Legal Writing', Prepared for Legal Scrutiny
Nevertheless, two wildcard-type developments remain to be surmounted, and both fall on March 15. The first is a looming showdown between the White House and US politicians to raise the national debt ceiling beyond the maximum permitted $20 trillion. The US government cannot afford to default on its debt obligations in the face of a rising China. The White House, however, can use this opportunity to drastically prune its runaway US intelligence hydra to a professional core – saving countless billions in the process.

The second deals with a likely interest rate hike by the Federal Reserve after a decade of near-zero rates. The financial waters have not been tested for a long time. In fact, it now resembles a gunky swamp that masks innumerable socioeconomic uncertainties.

For the shadow government, this may not pose much of a problem. Those trillions squirreled away will continue to generate billions in interest each month. Heroin revenues from Afghanistan alone can sustain the foot soldiers of America’s permanent social justice movement.  Perhaps this was what “Mission Accomplished” meant.

Beware the Ides of March? Just bring ‘em on!

Trump Talks to Abbas Over Phone, Says Time ‘To Make A Deal’

Majority in US Optimistic Trump Presidency Will Make Country Prosperous